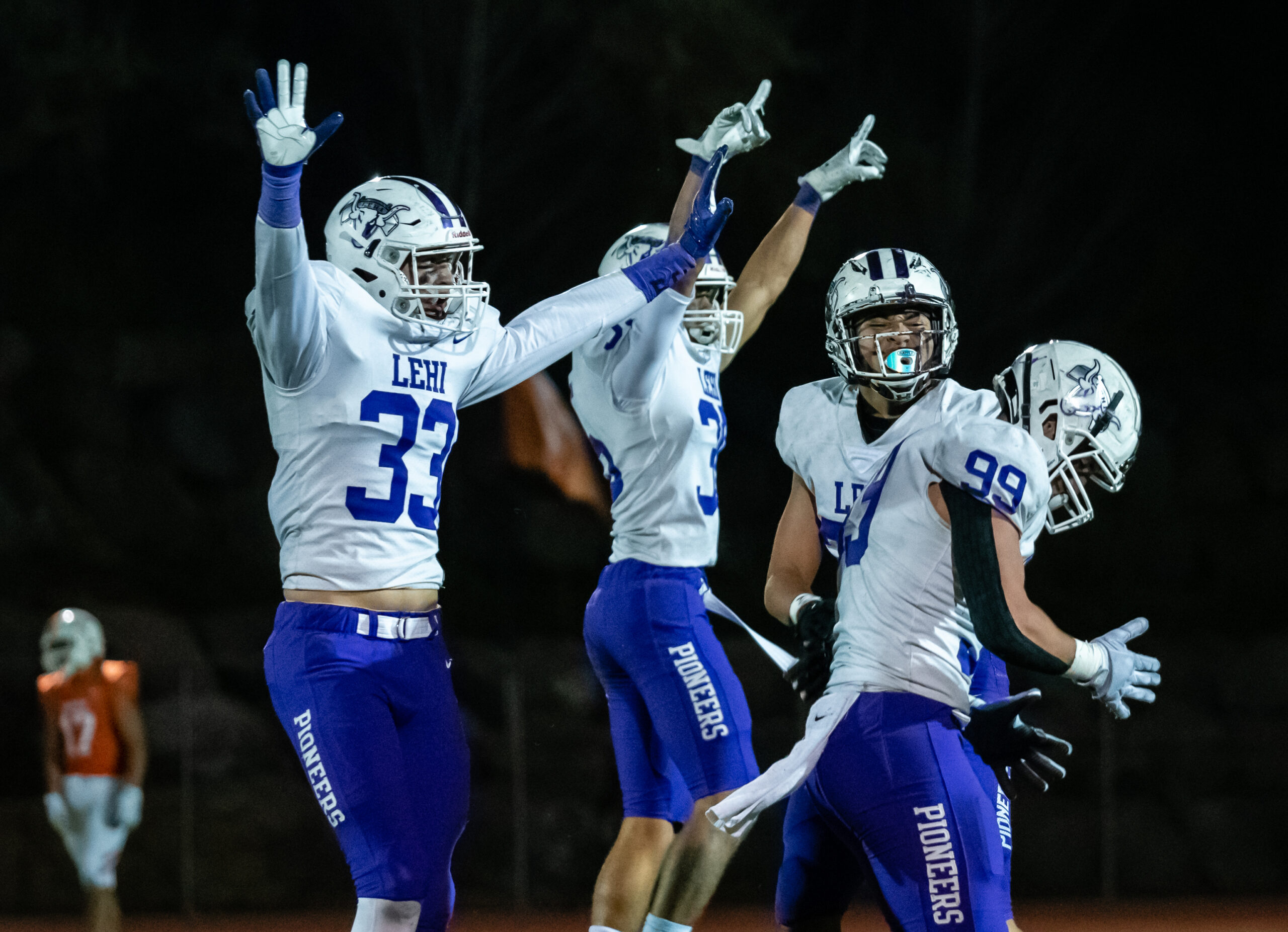 The #7 Pioneers rode a punishing defense, effective enough passing and the leg of their kicker to a huge upset of #2 Timpview 23-13 on their field Friday (Nov. 5) to punch their ticket to the 5A state semifinals this Thursday.

The defense set the tone early for the Pioneers in last week’s tilt.Lehi kicked off to the Thunderbirds, but their initial possession ended very quickly when junior defensive end Isaac Terrell intercepted a pass and returned it eight yards to get the Pioneers on the board.

Senior kicker Zane Goodrich’s PAT made it 7-0 and Lehi managed to stay in front the rest of the way, although no one knew that would be the case at the time.

Timpview’s second possession ended the same way, albeit on the other end of the field. Junior defensive back Kadiyon Sweat picked off a pass at the Lehi 30, but this time the Pioneers weren’t able to capitalize on the turnover.

In fact, Lehi didn’t get a first down on any of their initial three possessions. “The defense busted their butts until we got it together on the offensive side,” said Pioneer Head Coach Ed Larson. The unit collectively made more than 100 tackles to achieve the evening’s result.

The Thunderbirds effectively contained the Lehi rushing attack throughout the contest, yielding only 29 yards on the ground. However, junior quarterback Jackson Brousseau did complete 26 passes for 308 yards using seven members of his team’s deep and talented receiving corps.

Timpview got on the board with a field goal at the 5:30 mark of the second quarter to narrow the advantage to 7-3.

Lehi responded by driving down the field and scoring on a 16-yard toss from Brousseau to junior tight end Boston Bingham for the only offensive touchdown of the night. “Jackson made a heck of a read on the Boston touchdown,” Larson said. “He did a great job on that.”

A seminal point in the game came on a first-half goal-line stand. The ball was inside the Lehi 2-yard-line and the Thunderbirds had two chances to score but were unable to do so. It was 14-3 for the Pioneers heading to the locker room.

Timpview mounted one sustained drive in the third period that ended with a short passing touchdown to narrow the gap to 14-10 at the 4:49 mark.

Lehi didn’t reach the red zone on the subsequent possession, but the Pioneers penetrated far enough for Goodrich to make a 41-yard field goal to push the margin back to 17-10.

The Thunderbirds added a 30-yard field goal early in the fourthto make it 17-13, but Lehi held them for the rest of the night. Goodrich added two more field goals in the final six minutes of the fourth quarter to secure the upset win for the visitors.

The kicker’s 11 points covered the entire margin of victory. “I told the guys that Zane shouldn’t have to buy lunch once this week,” Larson quipped.

This game was a reversal of fortune from the Pioneer loss at Timpview just four weeks earlier in region play. “What ended up happening was when we came off the field after that loss, there was a chorus from the players that we let them off the hook,” the coach said.

He added that his players believed “we can not only play with them, but we can beat them,” so they have continued to build on that ever since.

“Obviously the most important part is this keeps us alive in the playoffs,” Larson said. “I don’t think the state people understand how important it is to a community to go up and play in Salt Lake. You can’t put a price tag on making the semifinals. Ourlittle league program is excited and the town is buzzing.”

That said, the coach added that there’s still room for improvement. “We’ve struggled on our kickoff team this year,but they held them well tonight,” Larson said. “The defense bent but didn’t break. We had a chance to get more points than we did on offense, but we did enough good things to win.

“This a marker game for this program,” Larson said. “We didn’t play a perfect game in all three phases and still won, so that’s a plus.

“We killed ourselves a lot of the time with a drop or a mistaken read or penalty,” he continued. “When we watch the film, it’ll beobvious we can still get better and we’ll continue to work on that.”

The next opponent is something of a mystery since Stansbury isn’t a team that Lehi is naturally around much.

“I don’t know anything about them, but I’m sure they earned their spot,” Larson said. “What I do know is that they’re a one-town high school and the kids in the community bind together.”

“They’re something of a Jekyll and Hyde team,” Larson said. “They had losses early on but played well enough to beat Olympus and East. The biggest thing for us to remember is this is a team that’s going to play you hard for 48 minutes and have pride in who they are and who they represent.”