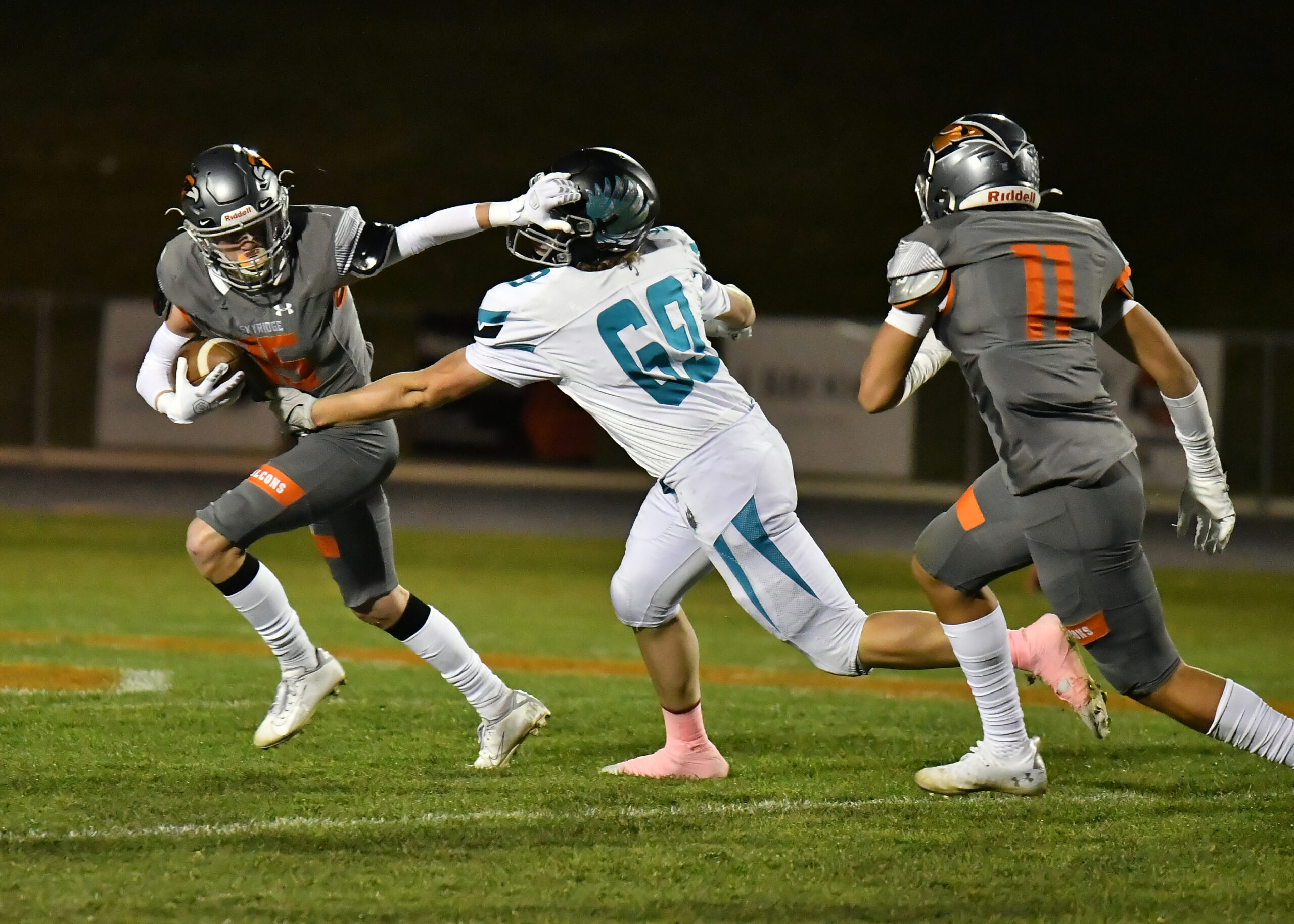 The #3 Falcons continued their playoff domination by fashioning a 52-7 victory over the #6 Phoenix in the quarterfinals of the 6A state football tournament on Nov. 5.

In last week’s contest with Farmington, Skyridge scored early and often to overwhelm yet another quality opponent.

The first touchdown came just four minutes into the game at the end of a 73-yard drive, when junior quarterback McCae Hillstead plowed into the endzone from four yards out. The PAT from senior kicker Cole Barker made it 7-0.

Two minutes later, the Falcons made the first of three fumble recoveries for the evening on the Phoenix 12-yard line. Three plays later, Hillstead made a short toss to junior tight end Ashton Eastman for the score and a 14-0 advantage with five minutes still to play in the quarter.

This time, Farmington was able to drive the length of the field and come up with a short passing touchdown to lessen the gap to 7-14.

It was all Skyridge after that as the hosts tallied 19 points in the second quarter, 13 in the third and six in the final period to complete the blowout.

Hillstead left the field after completing 17-of-29 attempts for 196 yards and three touchdowns. Barker kicked a 34-yard field goal and had five PATs for the night.

On the other side of the ball, senior linebacker Carver Cole, junior linebacker Elijah Terripaia and junior offensive lineman Stanley Raass each recovered a fumble, while junior defensive end Tausili Akana caused one to go along with his five solo tackles including three sacks.

“The margin of victory was wider than we expected going in,” said Skyridge Head Coach Jon Lehman.

“We have a lot of respect for Farmington. They played hard and they’re well coached. Their players understood what they were trying to do, so I was really happy with the final outcome.

“Farmington has a very effective running game but our defensive linemen and linebackers held them to less than a yard per play. They were really physical up front and clean in their reads. Our defensive backs played well also, as they have all year.

“Our offensive line was really physical with a lot of movement,” Lehman said. “They were especially good in pass protection and McCae did well as a dual threat. Jeter Fenton was great in the run game. Those guys have had awesome careers for us.”

Now the Falcons get the opportunity to play the Knights for the fourth time in two years. The coach said he knows this one will be different, but he’s not overly concerned about his team’s preparation.

“We know we’re playing a good opponent when our recent games have been over pretty quickly for us, but we’ve been tested all season,” he said. “We’ve already had to play American Fork, Lone Peak and Corner Canyon, so our schedule has prepared us for stuff like this.”

Lehman added, “I’m happy with the respect our kids have given the last two opponents. They’ve worked and prepared and taken whole process pretty seriously. They didn’t take the week off.

“We know we have to play our best to win this week,” he said.“Lone Peak is a great team, and we know they’ll be ready. We’ll do all the stuff that goes with playing this late in November.”