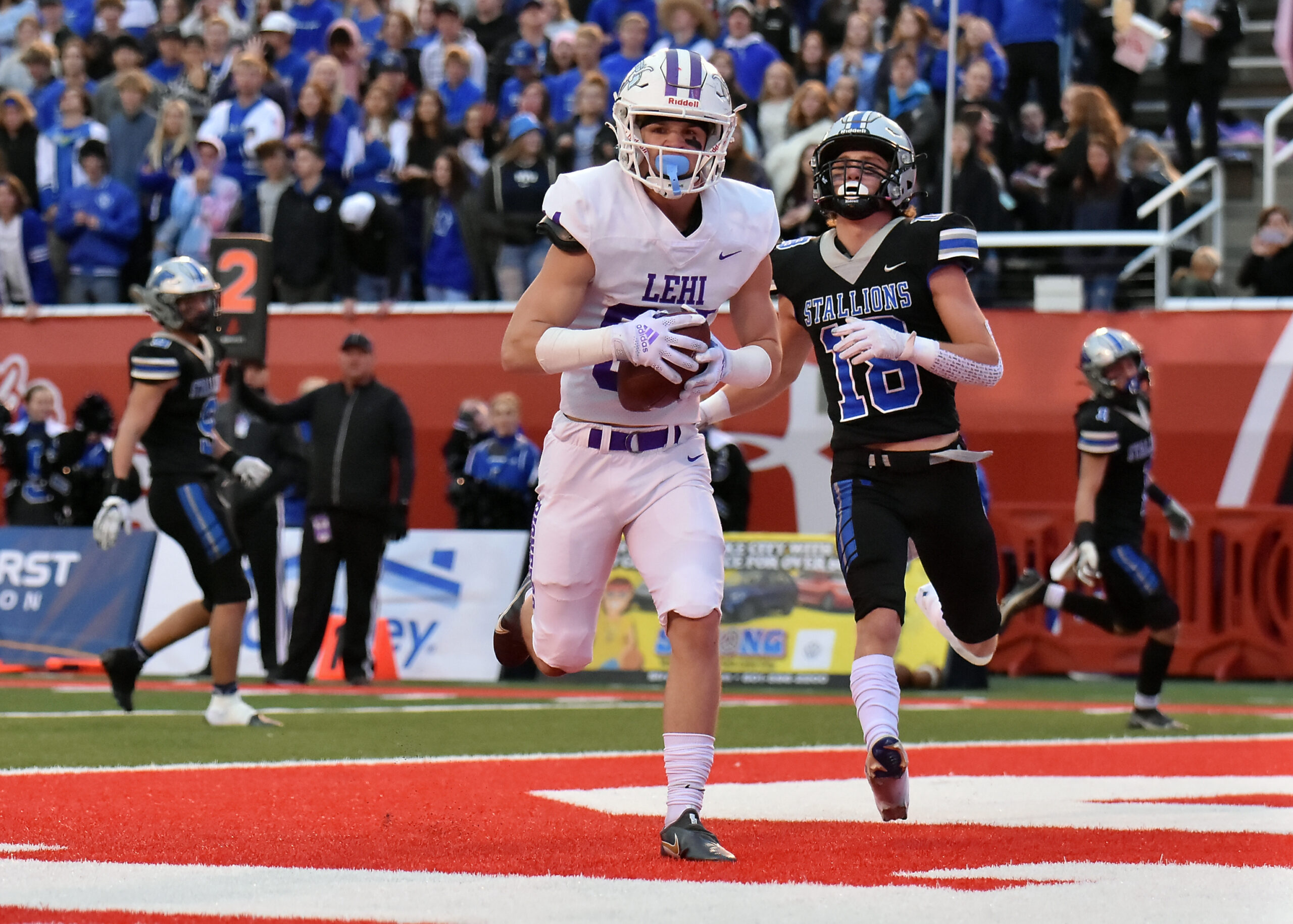 The #7 Pioneers persevered in a rugged contest to eliminate #3 Stansbury 28-14 in the semifinals of the 5A state tournament Thursday (Nov. 11) at the University of Utah’s Rice-Eccles Stadium.

Lehi (10-3) will now face #1 Springville (11-1) in the championship game next Friday (Nov. 19) at 11 a.m. The Devils barely got past defending state champion Orem 27-26 in the earlier game of the day. The #21 Tigers didn’t have a great year,but their playoff experience showed once the postseason arrived.

In today’s contest, the Pioneers won the toss and deferred to the second half, and Stansbury elected to receive. The game did not start auspiciously for the visiting side as the Stallions marched right down the field on their opening possession and took a 7-0 lead at the 7:46 mark of the first quarter.

On the ensuing kickoff, Lehi Renaissance man Kadiyon Sweat took the ball off the bounce and returned it 42 yards to the Stansbury 37. Seven plays later, the Pioneers were in the end zone as senior wide receiver Jaxon Christensen collected a 21-yard toss from junior quarterback Jackson Brousseau.

The PAT attempt hooked to the left and missed the narrower college goalposts, so the Stallions owned a 7-6 lead.

However, on the first play of their subsequent second series, the snap was mishandled and the ball hit the ground, where it was recovered by junior linebacker William McCleary at the Stansbury 30-yard line.

A sack and a couple of penalties stalled the movement of the ball, but on 4th-and-10, Brousseau made a critical completion to senior wide receiver Jacob Omer for 17 yards and a first down.

On the next play, it was Brousseau to junior tight end Boston Bingham for the 13-yard score. The Pioneers went for the 2-point conversion and succeeded in getting it as Brousseau found senior running back Carson Gonzalez to move his team in front at 14-7 with 2:09 left in the period.

With freshman Gavin Fenn making the kickoff, the ball sailed into the end zone, so the Stallions started at the Lehi 20. In part because of a sack by senior defensive tackle Kimball Tamala and junior defensive end Isaac Terrell, Stansbury had to punt. Junior Keahi Nawahine called a fair catch at the Stallion 49.

On a subsequent 4th-and-1, Gonzalez got the call and burst through the line, outrunning his pursuers as he sprinted 40 yards for the score. The PAT by senior kicker Zane Goodrich gave the Pioneers a 21-7 advantage eight seconds into the second quarter.

Multiple exchanges of the ball followed as neither team was able to create much movement offensively. However, Stansbury put a sustained drive together towards the end of the period and managed to close the gap to 14-21 with 2:22 left on the clock.That score stood at the break.

The second half was a defensive slugfest, with both teams making brilliant plays. The Stallions made the first one when they intercepted a pass in the red zone during Lehi’s initial possession of the third quarter, downing the ball on their own 2-yard line.

It was slow going for Stansbury against the stalwart Pioneer defense and the Stallions were soon forced to punt. A 12-yard return by Sweat set his team up at the Lehi 45.

A 14-yard completion to senior wide receiver Isaac Dayley and a 25-yard pickup from senior running back Isaac Mills helpedspur the drive that ended in a 9-yard touchdown throw to Christensen at the 3:26 mark of the third period. The Goodrich PAT completed the tally for the evening at 28-14.

There was still more than 15 minutes left to play. Stansbury reached the Lehi 9-yard line on their next drive but failed to convert on a 4th-and-3 and the Pioneers took over on downs. However, they weren’t able to move the ball and punted it right back after one series.

Working with a short field, the Stallions pushed to the Lehi 10-yard line and penetrated as far as the 2, but they were held there by a supreme defensive effort and the Pioneers once again took over on downs.

They managed to chew up the remaining 8:09 on the clock with an 80-yard drive that featured several clutch first downs to keep possession in Lehi’s hands to the end.

Despite the victory, Pioneer Head Coach Ed Larson was not happy with how his team played. “If we show up next week and play like we did today, we’re going to watch Springville walk off the field with the gold trophy,” he said.

“We made a lot of mistakes in all three phases,” he continued. “Our defense got some big stops when we needed them but there’s stuff we have to clean up. Our kids need to understand we have to play 48 minutes to win at this level and that every play counts.”

He noted that he had never seen the Stallions until he walked on the field today. “I have to give credit to Stansbury; they were ready,” the coach said. “They made adjustments during the game, and it was a tough win.

“Sometimes we didn’t respond to what they were doing and sometimes we just failed to execute,” Larson said. “My team is still young in some respects, but they’ve got to mature real quick this week.”

Brousseau finished 21-of-37 for 248 yards and three touchdowns. The receiving corps was led by Christensen with seven catches for 93 yards and two touchdowns. Gonzalez totaled 137 all-purpose yards and Sweat had 132.