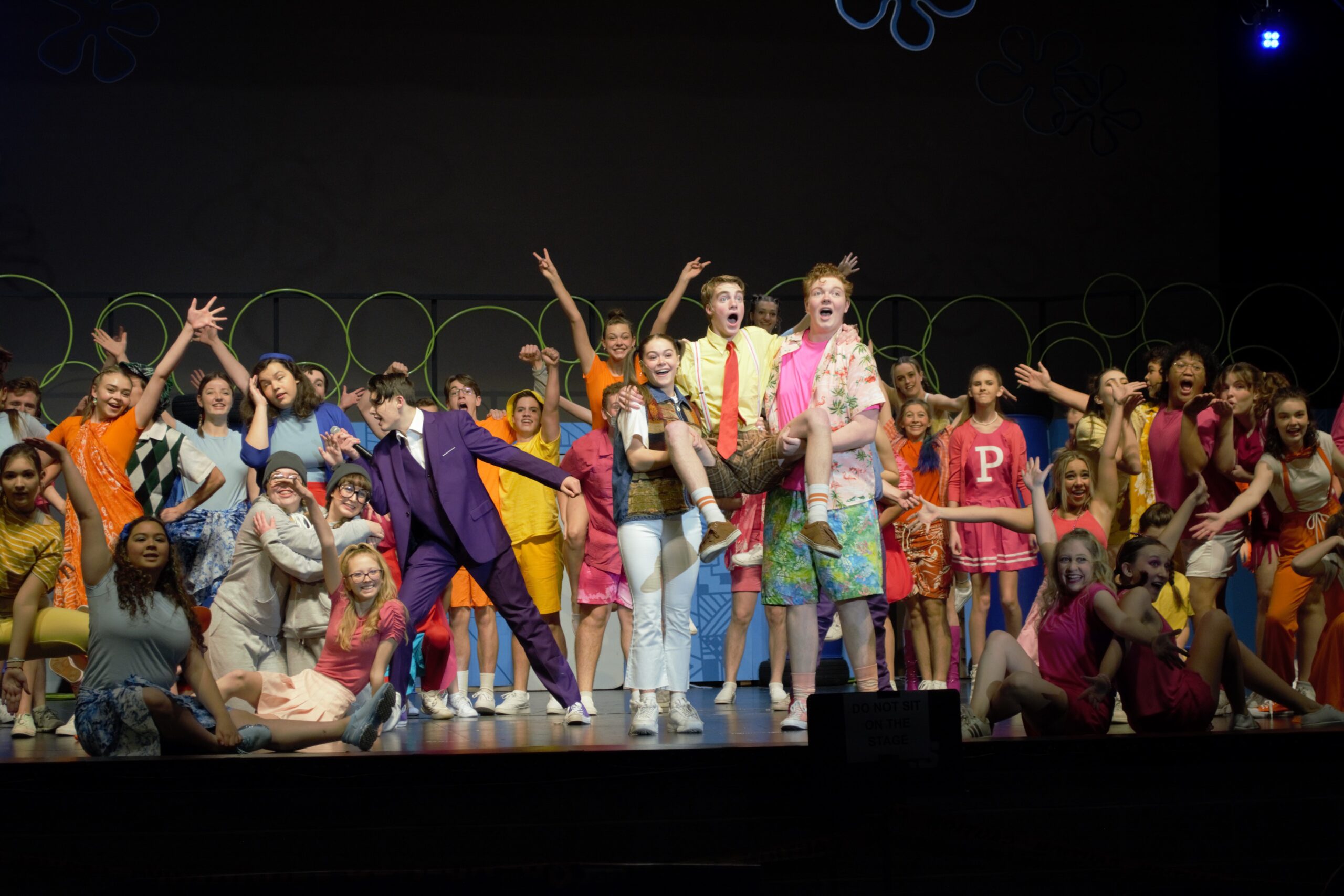 With a cast of more than one hundred students and dozens of colorful costumes and props, the goal for Brown was to make the high school stage look like an underwater cartoon. “There’s been a huge reliance on parents coming in to put things together. Jennifer is, once again, the mastermind and does much of the work,” Brown continued. “Jennifer Schoebinger is the genius behind all good things at Skyridge theatre.”

In SpongeBob SquarePants: The Musical, SpongeBob is trying to stop a volcano from destroying Bikini Bottom. “Sponge Bob is really a character who acknowledges there are difficulties and problems but uses this unfailing optimism and durable determination to get through those challenges,” said Brown. “He reminded my wife of a modern-day Pollyanna, finding a way to be optimistic in difficult times. It’s simplified for children, butbelow the surface we have a profound set of stories that really tie together and communicate a surprisingly intricate character.”

An unusual element of the show is the number of musicians who wrote songs for the musical. “There are songs by Steven Tyler, David Bowie, John Legend, Panic at the Disco, Plain White T’s, Cyndi Lauper, and Sara Bareilles. Before I listened to the music, I thought the idea of a Broadway musical of SpongeBob was silly. The music ended up converting me, though, it’s super fun,” Brown explained.

Jackson Brown plays SpongeBob SquarePants in the Skyridge production, but he had to warm up to the idea of being in the musical at all. His older brother Cole played Jean Valjean inSkyridge’s production of Les Miserables in 2017. “I was devastated when I heard we were doing SpongeBob the Musical, but now I love it,” said Jackson.

Jackson and castmates Connor Cooper and Elijah Newall appeared before the City Council a few weeks ago to invite the city to the show. “When you come into the auditorium, you’re in Bikini Bottom. It really is a show for the whole family,” Newall told the Mayor and City Council. “You’ll not only be supporting us, but the more than one hundred kids in the cast and crew.”

“You may think SpongeBob the Musical is the dumbest thing that could exist, and you may be right,” added Cooper, in character as Mr. Krabs at the City Council meeting. “But it’s still a great time.”

“We ended up with the perfect SpongeBob,” said Brown. “I never pre-cast any of the shows. I’ve been surprised too many times. I never want to go into it thinking I know who is going to be who because I would miss some phenomenal talent.”

“What I like about Sponge Bob is that his optimism isn’t unfounded. There really are people who are good and positive. It’s not about ignoring what’s there, it’s about facing that and working through it. It’s okay to be scared and overwhelmed by the task at hand and admit it. We can rise above,” Brown continued.

Tickets for Skyridge’s production of SpongeBob SquarePants: The Musical are available online at showtix4u.com. The show runs from Nov. 11 to Nov. 22, Thursday-Saturday and Mondays with one Tuesday evening show and a matinee on Saturday Nov. 20. at the Skyridge auditorium.