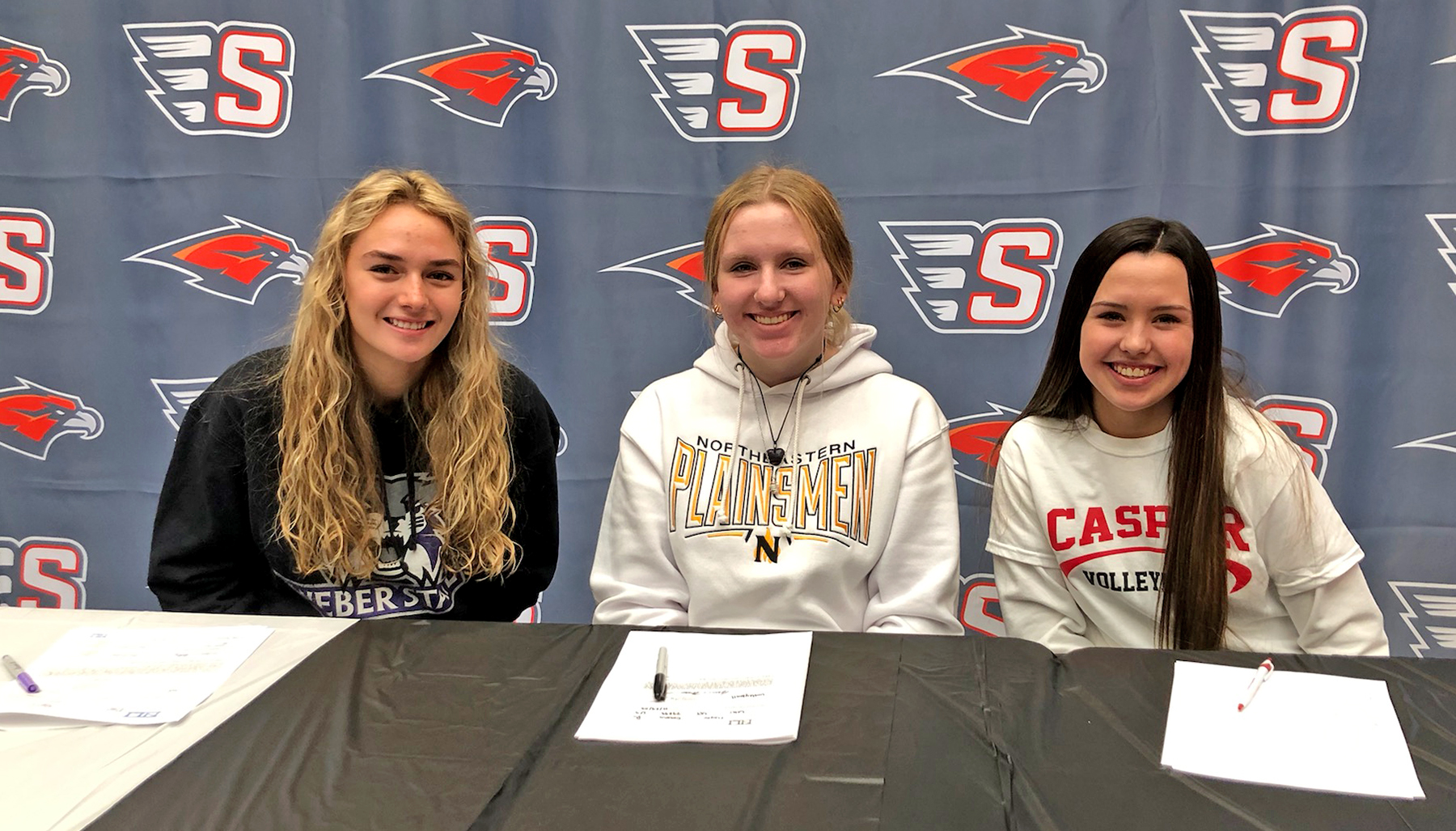 Three members of the Skyridge volleyball team signed to play college volleyball in a ceremony at the school on Nov. 30.

Outside hitter Rose Moore accepted her offer from Weber State, libero Licia Echevarria is heading to Casper College in Wyoming and setter Emma Meyer is moving on to Northeastern Junior College in Colorado.

Moore was a key player for the Falcons throughout her career and served as a captain this year. She finished this season with 235 kills, 70 aces, 53 blocks, 431 assists and 229 digs.

“Rose has been a three-year starter and a pivotal part of our team,” said Coach Deanna Meyer. “She is an offensivepowerhouse, very versatile and can play multiple positions from setter to pin hitter. She was big player for us and put up a strong block on the right side.

The coach continued. “Skyridge was one of the best serving teams in the state. As an individual, Rose had 70 aces, ranking her at #13 statewide.” Coach Meyer added that Moore wants to major in international business and then become a pilot.

Echevarria finished the season with 306 digs, 435 serve-receives and 41 assists. “Licia really became a key player for us this year,” Coach Meyer said. “She is a solid competitor and really helped push our team to be on task and work at a high level.

“She was an outstanding defensive player and provided a lot of support for our hitters through coverage and her fast reflexes along with solid serve-receive passing,” the coach said. Echevarria is aiming at a career in physical therapy.

As a senior, Emma Meyer registered 46 kills, 64 aces, 146 digs and 479 assists. “Emma has been a rock for our program,” Coach Meyer said. “She was also a three-year starter, as well as a solid player and leader who is very competitive and wants to help her team compete at a high level.

“Her understanding of the game and volleyball IQ was a big asset for us when running the offense,” the coach continued. “She is also one of the strongest servers in the state and Emma lead our team in points scored from the service line.” Emma wants to become a nurse.

“It has been such an honor to work with these girls and watch them become leaders and powerful women,” Coach Meyer added. “They are ready to take on new challenges and will do very well at the next level.

“All of them are fierce competitors and have solid work ethics. They all earned 1st team All-Region honors and were 6A seniorall-stars, besides being very good students,” she concluded.