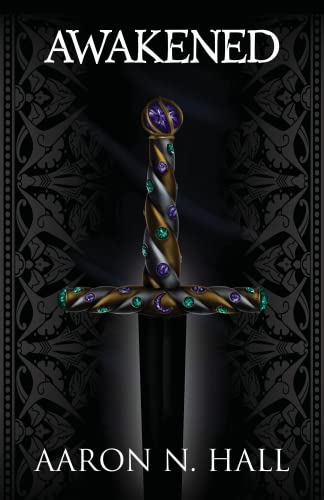 The third book in Aaron N. Hall’s Wevlian Chronicles, Awakened, concludes the trilogy he began 15 years ago and gives him another opportunity to support a cause he cares about.

“With this release I knew I wanted to do something to give back. I was struggling to figure out what I could do when the crisis in Ukraine happened,” Hall remembered. After researching online, he found Doctors Without Borders is already there doing important work. “They’re really a top-notch charity and very transparent about their financial responsibility. I decided to donate 100% of the money Awakened makes during the first month of sales to Doctors Without Borders.”

Hall donated the first month of royalties from his second book in the Wevlian series, Purged, to the National Suicide Prevention Lifeline to honor a fan.

Aaron N. Hall started writing the first book in his WevlianChronicles when he was only 15 years old. He saw a video during his high school seminary class (religious instruction)where bandits kidnapped a prince and tried to subject him to riotous living, but the prince wasn’t having it. “When the kidnappers asked why he wouldn’t indulge, he said it was because one day he would be king,” Hall explained.

“That was such an interesting concept to me. What if you couldn’t hold a position of supreme executive power unless you were morally upright? How would you find such a person with high morals and a natural affinity to good?” he wondered. As the story took shape in his mind, he knew there had to be a spiritual component too. “That’s where Foreordained, the first book, starts.”

Although Hall is inspired by classic literature, his first book series is “high fantasy with a lot of heart.” He’s found his audience self-publishing through Amazon and building his fanbase on social media.

“When I started in 2013 it was a very new thing to self-publish; people weren’t taking it very seriously. Now we live in a literary environment where self-publishers are making good money and reaching best-seller lists. The tables have kind of turned where traditional publishing is struggling a little bit. It’s a very different world now,” said Hall. “Self-publishing puts a lot of power into the hands of the authors.”

Aaron N. Hall credits his success as a writer to elementary school teachers who encouraged him at a young age. “I learned that I love telling stories in grade school – I think I was about nine years old. I wrote short stories and kind of relished assignments where I had to tell a story,” he remembered.

One year Hall wrote a little adventure about going to a haunted house with his friends for an annual Halloween story assignment. Later at parent teacher conference, the teacher told his parents how good the story was, that it had humor and adventure and it was well-written. “It was in that moment that I realized I liked writing that story and here was my teacher saying I was good at it. I wanted to do more of that.”

Aaron N. Hall is a copywriter by day, but he spends his evenings writing stories. His book Awakened is available on April 2. All royalties from the first month of sales will go to Doctors Without Borders helping people in Ukraine.