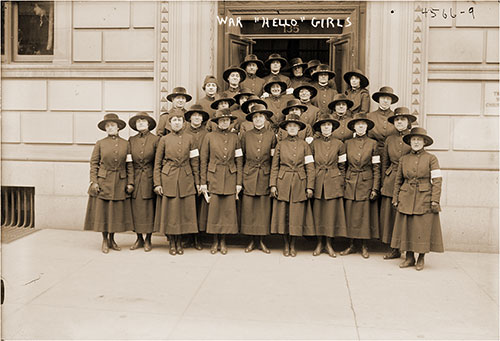 More than 100 years ago, women from every state in the U.S. volunteered to serve as switchboard operators and real-time translators on the front lines of World War I. They served under commissioned officers, wore dog tags, rank insignia and uniforms and swore the Army Oath, but the 223 women and 2 men of the Signal Corps Telephone Operator Unit were told when they came home that they had served as “civilian contractors” instead of soldiers. Lehi’s John Hutchings MuseumDirector Daniela Larsen is doing her part to get the “Hello Girls” recognition they’ve long deserved.

“At first, they had men operating the phone lines, but they were slow. General Pershing requested women who were already trained as switchboard operators instead,” explained Daniela Larsen. The women were six times faster at connecting calls than the men they replaced. “A few minutes made the difference between life and death on the front lines in France.”

Two of the “Hello Girls” were from Utah, Emelia Katharine Lumpert and Mary Marshall.

For almost 60 years, the surviving members of the Signal Corps Telephone Operator Unit petitioned Congress for the same veterans’ recognition afforded to their male colleagues and female Army nurses. In 1977 Congress passed a law paving the way for the “Hello Girls” and the WASP pilots from WW2 to be recognized as full veterans of the US Armed Forces. In 2009 the WASPs received the Congressional Gold Medal, the highest medal bestowed by civilians in the United States.

The World War One Centennial Commission is working to honor the “Hello Girls” with the same honor. Congressional Gold Medal bill, S.206 currently has 24 cosponsors and bipartisan support.

“World War I was so long ago; we’re losing our connections to it and the lessons from it. The John Hutchings Museum was built as a monument to World War I. We really want to take up this cause and properly memorialize the ‘Hello Girls,” Larsen explained.

On Monday, March 21, Larsen met with staff members in Utah Senator Mike Lee’s office to ask them to support S. 206. Both Utah senators’ offices are busy fielding calls about helping Ukraine, but Senator Lee’s staff listened attentively to Larsen. “We will always take time to hear from constituents. This is a great cause,” said Nate Jackson, Northern Utah Director and Military Affairs Advisor for Senator Lee.