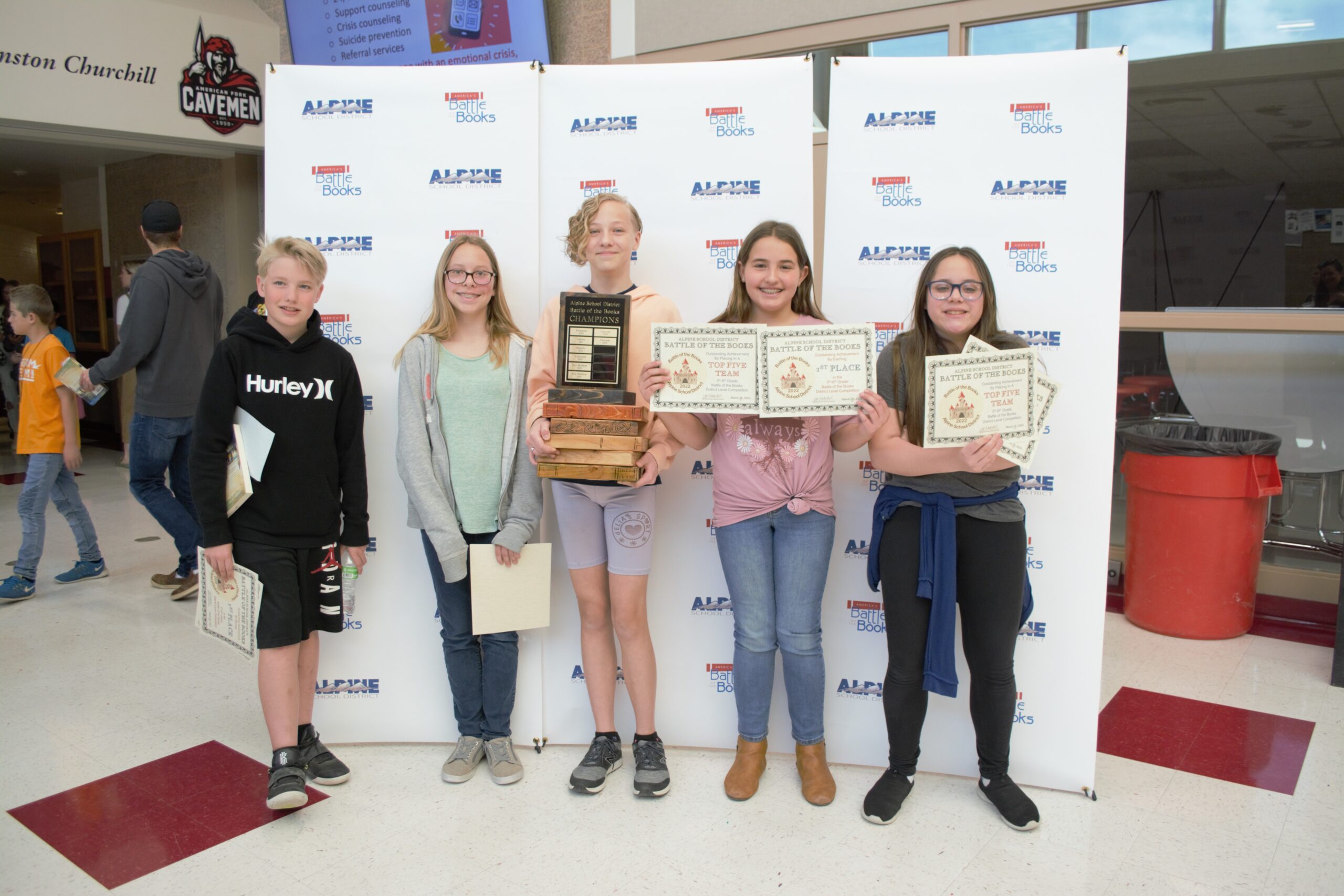 A sixth-grade team from Sego Lily Elementary in Lehi won Alpine School District’s (ASD) Battle of the Books on Saturday, March 26. “I am very proud of the students for the hard workthey put in and to see them win both the school competition and the district. This is such a big accomplishment for them,” said the team’s teacher, Mrs. Deedee Cashwell.

America’s Battle of the Books is a reading incentive program for third through 12th grades. There are a variety of ways to conduct battles, but official lists and questions come from the national organization. In ASD, schools have battles “Family Feud”-style between third and fourth-grade teams of five as well as battles between fifth and sixth-grade teams. The winning team for fifth and sixth grade from each participating school goes to the district battle at American Fork Junior High. More than 45 schools participate every year, and the competition is fierce.

“I encourage the students to read as many of the books as they can. I see students gain interest in reading different books, as well as the fun of getting to compete against others,” explained Mrs. Cashwell. The Battle of the Books list consists of 20 books. The teams answer 24 detailed questions about the books in eachbattle and the answer is the full title of the book. They also get points for knowing the correct author of the book.

“We helped the students prepare by promoting the Battle of the Books list. We made a pin for each book title with the cover on it. When a student read the book, they got a pin,” said Wendy Belcher, Media Specialist at Sego Lily Elementary. “We tried to be very student-directed, to let them take the lead.”

The librarians and media specialists at the elementary schools in ASD lead the Battle of the Books program in their school.

The winning team from Sego Lily included Brady Peck, Addison Bellows, Camille Summers, Pepper Smith and Olivia Jara. Students choose their team, and everyone did their best to read as many of the 20 books as they could. Addison Bellows even read 17 of the books twice.

“I love BOB, it’s one of my favorite things,” said Pepper Smith, using the nickname students gave the competition.

Jessica Day George, the author of the Battle of the Books selection Tuesdays at the Castle, came to the district battles and signed her book for hundreds of students. George had a question-and-answer session as judges tallied the scorecards. One student asked where she got the inspiration for Tuesdays at the Castle.

“I was always disappointed as a kid when I would read books with castles, but they would only be a pile of bricks with a wizard living in them,” George answered. “I was really tired and getting ready for bed one night when I had the idea of a castle being magic. I started to cry because I was so tired, but I knew I needed to write down my idea before I forgot it. I sat at my bedside table and wrote, ‘What if the castle gets sick and snot runs in the hallways?’ Then I didn’t end up writing anything about snot in the hallways because that’s disgusting.”

Dr. Vallen Thomas, Director of Educational Services for ASD, announced the winner of the district battles as well as the top five teams. “For the first time in the district Battle of the Books history we have a five-way tie in the top five,” said Thomas. Fox Hollow Elementary, another Lehi school, was part of that five-way tie. Teams in the top five received gift certificates to Pioneer Book in Provo and gift certificates to Chick-fil-A. Every team who made it to the district battle got a signed copy of Tuesdays at the Castle.