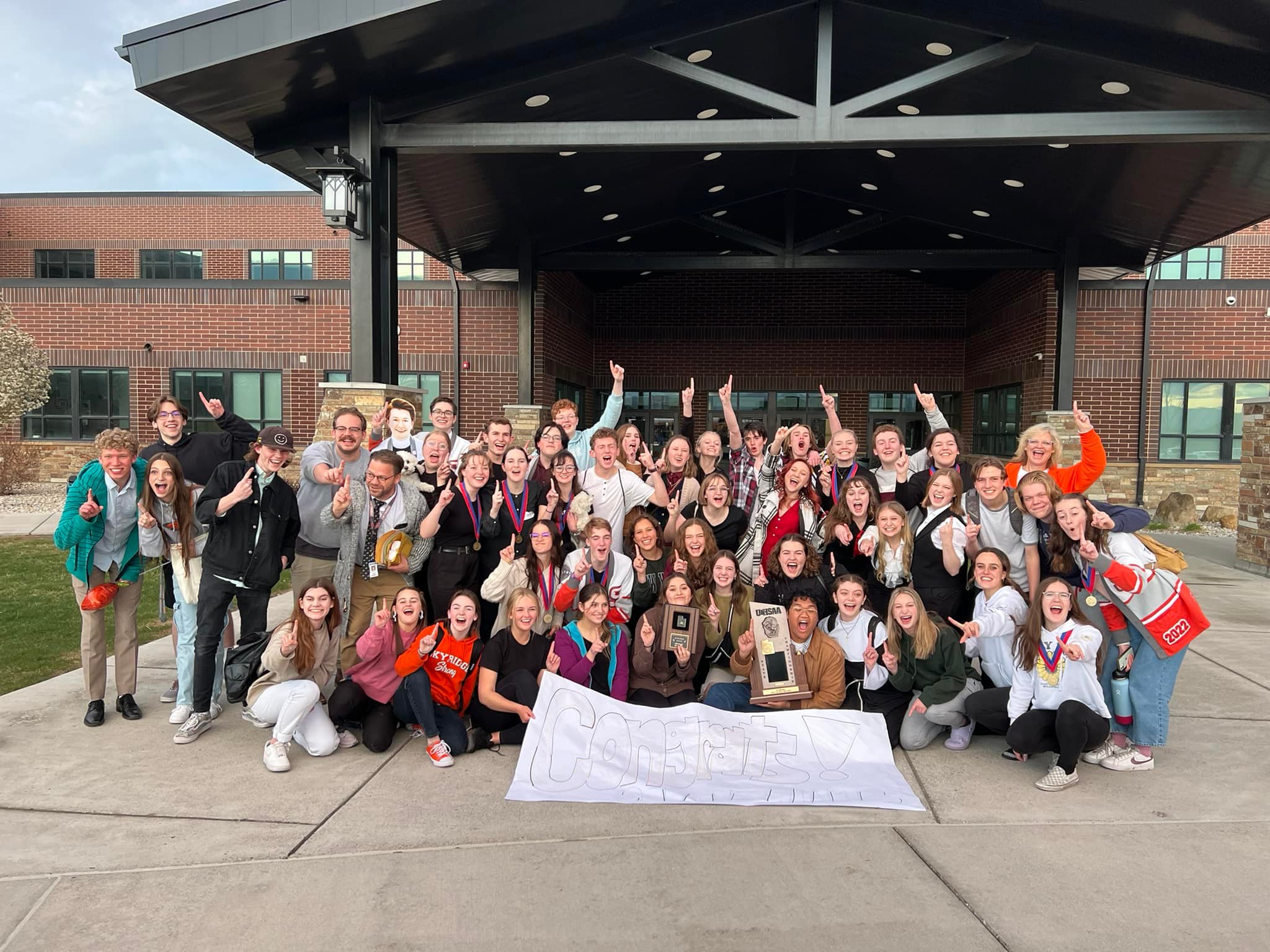 Drama teacher John Brown, along with students and parents have been preparing, planning and working with kids since August with this end in mind. According to Brown, “It really is a top to bottom program effort. Even the kids who weren’t on the team gave a lot of support and worked hard to create a strong competitive environment. Our students can push each other and have grown a lot. All of that really came together and resulted in winning State.”

John Brown also likes to point out that winning state is made up of a point total from all the school’s pieces, so it’s not just about having a few really talented students at the top, there needs to be a lot of talent and consistency across the entire team in order to score enough points to win. “That’s really what sets us apart is just how many students we have that perform at a superior level,” said co-director, and John Brown’s son, Chip Brown.

Both John and Chip Brown worked together to compile the team, assign the pieces and give general direction. Jennifer Schoebinger helped with analyzing the data from past competitions, as well as helping with a lot of the logistics such as set design and transportation. Kirsten Richards (Ms. Kissy) helped by giving feedback and coaching to students as well as giving feedback to John Brown and then being a huge support to the students on the day of the competition.

The awards presented to Skyridge students were:

2nd Place – The Miraculous Journey of Edward Tulane (One Act)

Principal John Wallwork has been a huge supporter of Skyridge Theater this year. Wallwork attends every performance and was there at State to see them win. Mayor Mark Johnson has likewise been a huge supporter. Johnson has been at every performance and encouraged the kids to come out to council meetings to keep the council informed of performances. According to one parent, “Mayor Johnson literally dropped everything the moment he heard Skyridge won and ran over to meet the kids getting off the bus.”

Four Regions competed in the day-long event. There is the one-act play and six other events with four unique pieces per school per event, making a total of 25 showcase pieces. Including the one-act play, each actor can only perform in one other event.

The pieces are performed three times in front of three different judges. The highest scores (6-8 per category) go on to perform again in the medal round. From that, 1st, 2nd, and 3rd place winners are declared. All the scores from all performances, including the one-act play, are tallied and the Showcase winneror State Champion is named.

Skyridge went into the medal round with 10 pieces and the lead, over Corner Canyon who had 8, and American Fork who had 7.

“Watching the team perform at State was an incredible experience. It was loud, unbelievably loud. Every range of emotion was on display. I saw devastation and heartbreak alongside the overwhelming joy of victory. Through it all, I watched John Brown, one of the most incredible mentors and teachers I have ever crossed paths with, empathize, encourage, and celebrate with each member of the team. And that’s how it’s been all year long. There are no small parts at Skyridge. It is over 100 performers that make Skyridge Theater the best in the State. I am so grateful my son can be part of this amazing program,” said parent Heather Newall.