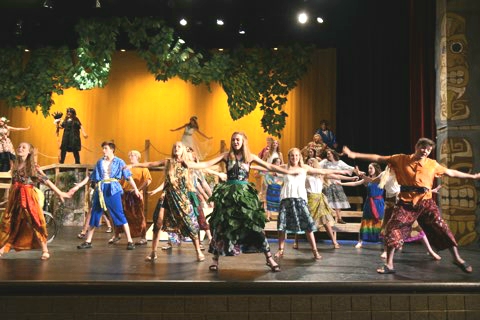 Drama students at Willowcreek Middle School will perform the musical “Once on This Island Jr.” starting tonight, Thursday, April 21, and running until April 25, at 7 p.m. at the school, 2275 West 300 North.

“I hope people will see it. The kids are so talented and it’s a beautiful message,” said Cali Wilkes, director and drama teacher at WMS. “The kids have been working really hard since January,”

“Once on This Island Jr.” is an adaptation of the popular Hans Christian Anderson fairy tale “The Little Mermaid.” The musical adds Calypso-style songs and rousing dance numbers to the story of TiMoune, a peasant girl who rescues and falls in love with Daniel, a wealthy boy from the other side of her island. When Daniel is returned to his people, the fantastical gods who rule the island guide TiMoune on a quest that will testthe strength of her love against the powerful forces of prejudice, hatred and even death.

This is the first time in three years Wilkes and her students haven’t had to adjust or even cancel shows because of the COVID-19 pandemic. “These kids are so committed and excited to perform,” said Wilkes. “They get along so well – it’s one of the most cohesive casts I’ve ever had. I really enjoy coming to rehearsals. The students appreciate having this experience muchmore and parents are much more willing to help make things happen.”

The cast “Once on This Island” is a mix of seventh, eighth and ninth graders. “The parts really showcase the talents of these students,” said Wilkes. “Josie Killpack who plays TiMoune has been in my program for the past three years. She is amazing – I get chills when I hear her sing on stage. She’s such a kind girl, too.”

The student actors have studied their character arcs over the last three months, crafting a backstory and an individual journey for themselves. Wilkes’ said, “It’s a nice growth opportunity for the students to think about who they’re going to be.”

The split for junior high school-age students into three schools instead of two in Lehi hasn’t affected the drama program at Willowcreek much. Wilkes lost a few students to Lehi Junior, including Desi McKinnon who plays one of the gods in the show. McKinnon splits her time between WMS and Lehi Junior to be in Wilkes’ show. “The program is going strong, we have about 57 kids in the cast plus 20 or so in the stage crew. They rehearse during theater class as well as after school,” Wilkes explained.

Wilkes has a theater intern from Lehi High School, Luke Elison, a dance teacher at WMS McKenna Hague and Derek Cain helped Wilkes choreograph the dance numbers in “Once on This Island.” Wilkes has a hand in every part of the production. She even has a sewing machine in her classroom where she sews costumes. “I’ve really put my heart and soul into this show,” said Wilkes. “It’s such a beautiful show and a message all of us need right now. That’s why I chose it.”

All proceeds from ticket sales to “Once on This Island” go to the WMS Drama Department.