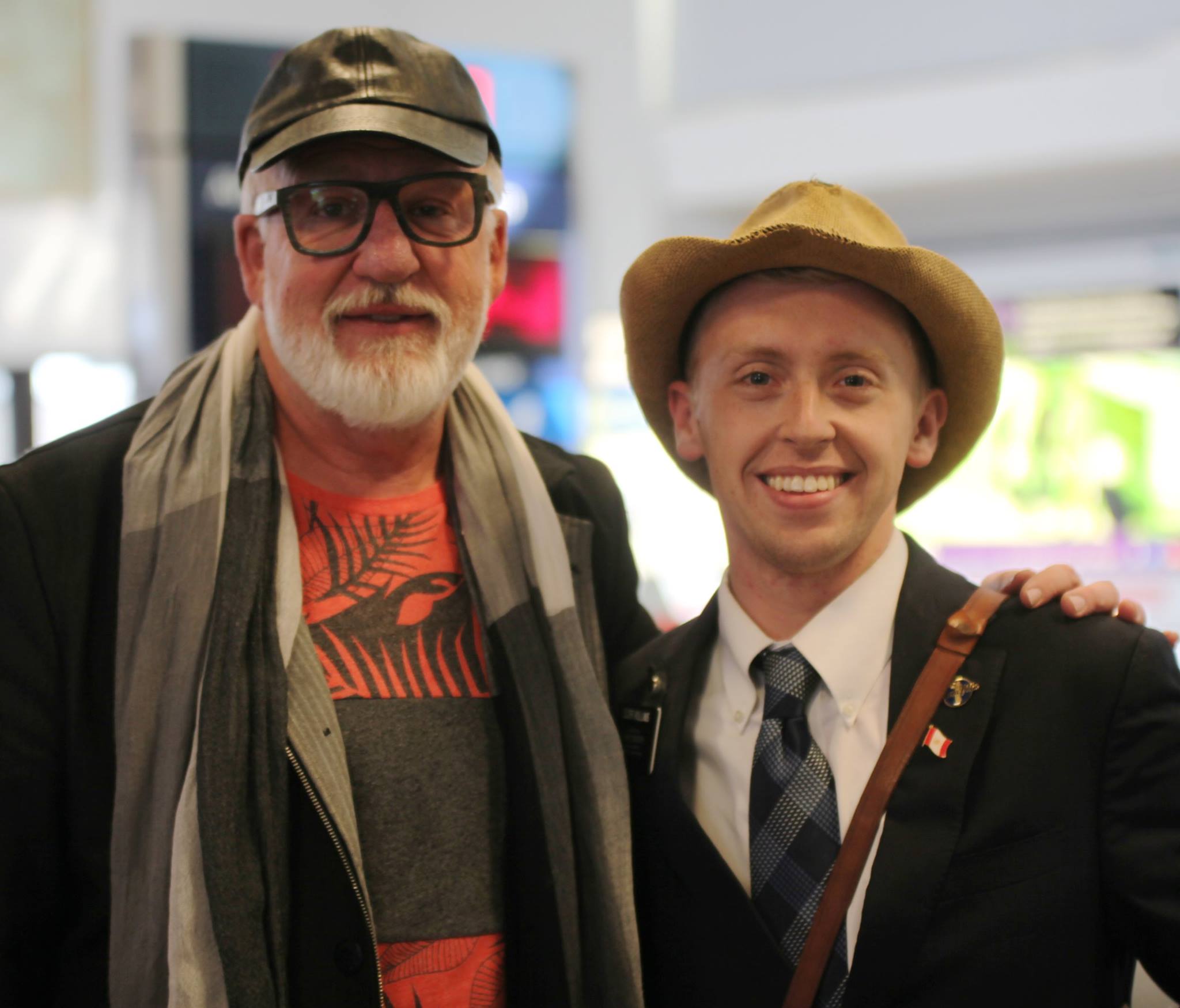 “I don’t want to watch this alone! I want to watch it with all my old friends,” said artist Randy Blackburn of the documentary “Home Away From Home” created by Lehi High School alumni Tim Rollins. Rollins filmed Blackburn and LHS drama teacher Mindy Nelsen during the preparation and production of the final show in the old auditorium before it was demolished in 2020and just weeks before the COVID-19 pandemic shut everything down.

Tim Rollins graduated from Lehi High School in 2013. He worked in the theater program and participated in all the musicals and plays. Rollins went on to BYU where he was accepted into the film school program with a short documentary about Randy Blackburn.

“Randy has been a role model for me growing up and he’s been a good friend to me for years,” said Rollins. “I wanted to explore what motivates him to spend so much time and effort creating all the wonderful art he does for the sets.”

In 2019 Rollins received approval for a longer documentary about Blackburn, along with a little funding assistance from BYU. “I filmed it with my own equipment except for some lighting from BYU,” remembered Rollins. Starting in December 2019, he began filming Blackburn’s process of developing the set design for the LHS production of “The Curious Incident of the Dog in the Nighttime.”

“In addition to exploring Randy’s side of the Lehi High theater experience, the old theater was scheduled to be torn down while I was filming scenes for a documentary about him,” Rollins continued. “It kind of made sense to make a sandwich with the two stories. I followed the rehearsals and set construction from start to finish.”

“We got to the end of the show, and it was time to say goodbye to the space,” Rollins remembered. “I had the wonderful experience of bringing in several alumni to interview. The story started to take shape around what it was like to create a production, Randy’s art, and what it was like to say goodbye to this wonderful auditorium that had become a home-away-from-home for Randy, Mindy, the alumni and the students.”

“Home Away from Home” begins with Randy Blackburnpulling into the Lehi High School parking lot on a rainy day. He unlocks the door to the auditorium and gets to work. “I saw the first minute of the documentary and it’s me in the car driving to the high school. I said, ‘Tim when were you in my car?’” laughed Blackburn. It took a minute for him to remember filming those moments from two years ago. “I had no idea what he was going to end up using. I can’t wait to see it.”

Just as Rollins finished filming, the COVID-19 pandemic shut everything down and it was more than a year before Blackburncould safely return to work with LHS theater productions.

Randy Blackburn started working with Mindy Nelsen 14 years ago on a production of “Children of Eden” because his son was a cast member. “I told Mindy I could help her, that I’d done Pageant of the Arts for The Church of Jesus Christ of Latter-day Saints and other things,” remembered Blackburn. Nelsen took him up on the offer to try to get the sky right for “Children of Eden.”

“Ever since then, I’ve been more and more involved,” Blackburn continued. When he looks back now, those first sets seem amateurish.

One of his favorite set designs in the old Lehi High School auditorium was “Tarzan.” “Tarzan was really cool. We had five ropes, all illegal. We would swing on them constantly. I had a ramp built across the center of the whole auditorium and the gorillas would run up and down it and shake the seats,” Blackburn said. “There wasn’t a piece of that stage that wasn’t painted.”

Blackburn brings all his years of experience to the 2022 version of “Children of Eden” at Lehi High School, which runs until Saturday, April 30. Randy unearthed dozens of his grandmother’s handmade afghans for the set. He took care of his grandmother for years – she’d spend her days making the “granny squares” and in the evenings he would help her arrange them into patterns. “They hand down the staff through the generations in the show and I wanted something to represent that in the set.” He’s continued the theme of fabric and quilt squares throughout the production with the animals and other set pieces.

“I think I’m looser as an artist because I can paint so big here,” Blackburn said. “I like it because with my vision troubles I can see the big stuff.” He wears both contacts and glasses after four corneal transplants. He was legally blind after college but kept painting with thick paint that he could feel. In the hospital after his surgeries, he scratched pictures for the nurses to pass the time.

“The alumni and the community will really connect with thisdocumentary,” said filmmaker Tim Rollins. “It’s an opportunity to appreciate what it means to serve and create an environment where people feel at home. I hope it will help people want to be of service like Randy has been. He’s been a constant example for many, many people. We’re going to be celebrating that.”

“Home Away From Home” premieres at Lehi High School on Saturday, May 7 at 7 p.m.