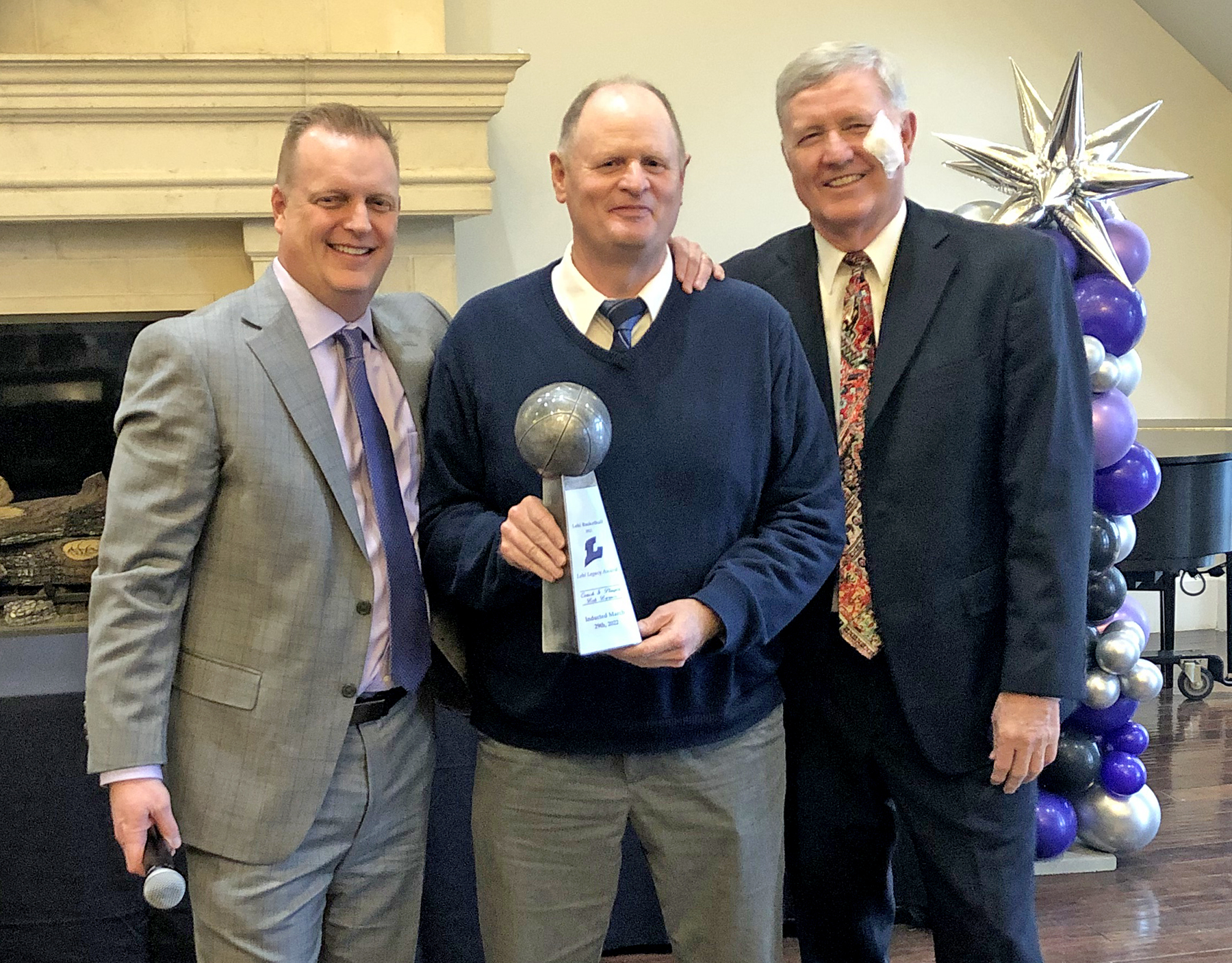 Former Pioneer coach and player Bob Barnes was selected to receive this year’s Lehi Legacy award because of his many years of service and contributions to the Lehi boys basketball program. He was presented with a custom trophy during the Pioneer boys basketball banquet on March 29.

“Coach Barnes has had a remarkable influence on Lehi basketball,” said current Coach Quincy Lewis. “He helped wintwo state titles and was named co-MVP of the state for Class 2A his senior year.

“He went on to a collegiate career at Dixie State and then returned to his alma mater, where he devoted many years to the program as an assistant and later as head coach,” Lewis continued.

“He has spent countless hours helping Lehi basketball and continues to support the program and players to this day,” he said. “It is an honor for us to induct Coach Barnes into the Lehi Legacy Club.” Barnes continues to serve the Lehi community as a counselor at the school.

“I first came to Lehi when Bob was a freshman,” Wagner said.“When I held my first open gym, he and three other guys were the only ones who showed up. No matter what others decided to do, he was always there. He has shown that same kind of commitment in everything he does.”

Wagner recalled the game when Lehi took on American Fork for the first time in a while. The Cavemen played in Class 3A then and had declined to play the small-town Pioneers for some time. “Bob scored 26 points in the first half and we ended up beating them by 30,” the coach said.

Barnes also played baseball, and in 1980-81 as a sophomore, he had the chance to contribute doubly to a unique event in Pioneer history, and also in state history to that point.

Lehi became the first Utah high school ever to win four unshared state titles in one school year, which were in football, boys basketball, baseball and track.

As a player, Barnes was a state co-MVP with Jeff Burningham when the Pioneers won the championship in 1983. He was named to the All-State 2nd Team the previous year and accomplished marks that still appear in the program’s records list.

In the article announcing their All-State second team honor from the Deseret News in 1982, it said, “Burningham and Barnes have teamed up to be one of the finest guard combinations in Utah. They have outstanding stats on assists, steals and both are great shooters.

“They were among the leaders in scoring at the tournament and can shoot with deadly accuracy from outside or on fast-break baskets.”

Barnes was also named to the All-State second team by the Salt Lake Tribune that season. In the article announcing that recognition, it said Barnes was “a six foot junior who really came on strong for the Pioneers this year.

“Bob’s basketball savvy cannot be questioned and his ball-handling abilities helped him to receive the honor. He is cool under pressure and is accurate shooting from outside. He is a good passer and has great stats on assists.”

The Pioneers were the top-ranked 2A team entering the tournament that year but were upset in the first round. They came back through the consolation bracket to win the fifth-place trophy.

Barnes scored 24 points to lead the way in the consolation final, including 10-of-10 free throws, still one of the best marks in program history. Eight of those points came at the charity stripe in the final three minutes of the contest to lift Lehi to an 87-83 victory over Millard.

In the 1982-83 season, Lehi came roaring back from the previous year’s tournament disappointment to post an 8-1 record in the preseason, the lone loss being by a single basket in the final of the New Mexico Classic tournament.

Here’s what the Pioneer Revue had to say about the Lehi guards heading into the region season. “The Pioneers employ the law firm of Barnes and Burningham who plot to win each case and keep law and order within the confines of any court where the trial is being held.

“They seldom wilt when their opponents object to their strategy, and judging from past performances they will get a positive verdict in each tussle on the basketball court.

“The dangerous duo call the gym their home. If they are wanted day or night their answering service is on a court-somewhere. They’ve been known to put in an eight hour workout in the backyard wherever there is a hoop, be it attached to a barn or an apple tree.

“Their backcourt wizardry baffles opponents whether they throw up a man-to-man defense or some type of zone.” The Pioneers rolled through Region 9 to win the league title.

Deseret News writer Kurt Kragthorpe waxed similarly poetic when writing about the guard duo at the beginning of the state tournament. After first noting that the pair look nothing alike physically – Barnes had red hair and freckles and was two inches taller than his counterpart – Kragthorpe observed:

“On the court, they might as well be clones. They score – exactly 275 points each (15.0 averages in the regular season). They pass. They handle the ball. Generally, they answer the job description for a guard.

“Everybody was talking about Lehi Thursday night at the state 2-A basketball tournament, and nobody mentions the Pioneers without talking about Barnes and Burningham. Both.”

The Pioneers swept through the playoffs and beat Wasatch in a thrilling finale 58-54 to win their second title in three years. Barnes made two of the final four points to cement the victory. The dynamic backcourt pair were named co-MVPs, a very rare occurrence but perfectly appropriate in this instance.

Wagner later moved on to become a coach at Dixie State and Barnes played for him there as well, providing more memorable moments.

“Bob scored twice on isolation plays in the final minute of our game against Utah Valley to secure the win,” Wagner said. It was then one of the biggest victories in program history. Wagner also coached Lewis at Dixie and added him to his staff after he took the head coaching job at BYU-Hawaii.

“Bob and Quincy were both hard workers and very dedicated,” Wagner said. “They spent hours and hours in the gym. You are getting the benefit of all of the work they put in.”

Lewis added, “Bob is a great basketball guy and a great person. He’s what we want to represent and recognize with these Legacy awards.”

Barnes was emotional when he accepted the trophy. “When Coach Wagner came here, we didn’t have a great tradition,” Barnes said. “He helped us to build one, and it was great to be a part of that. I hope your experience helps you as much as mine helped me.

“You are part of a great program. The people in our community are interested in and appreciate what you do,” he concluded.