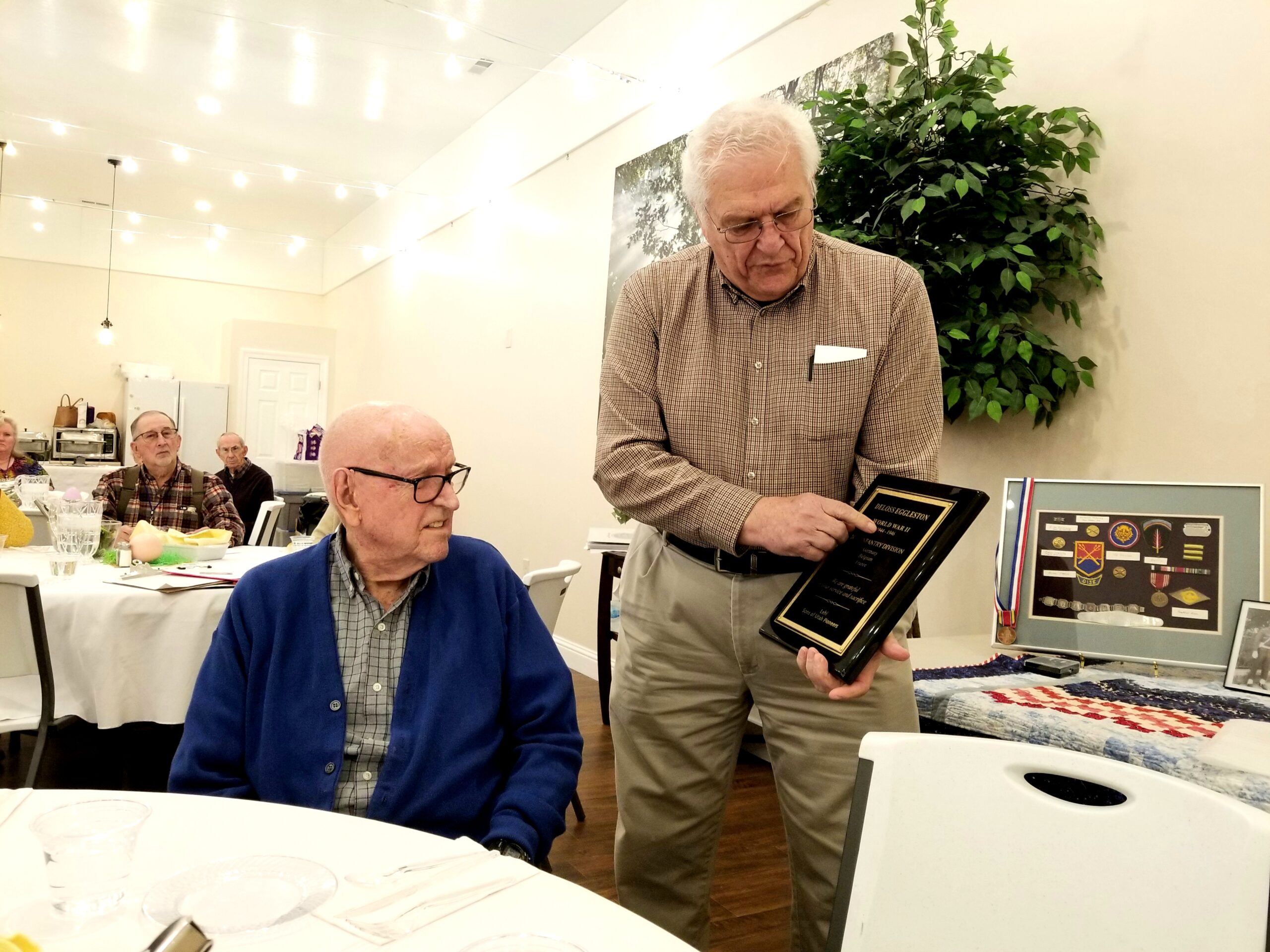 The Lehi Chapter of the Sons of the Utah Pioneers presented one of their members, DeLoss Eggleston, with a plaque and thanked him for his service to the country on Monday, April 11.

“My Dad is a better storyteller than I am,” Brent Eggleston, DeLoss’s son and a member of the Lehi Chapter began. DeLoss Eggleston was drafted in 1944 after helping assemble tail sections of the C-47 cargo/transport planes in the El Monte High School in California gym as part of a work-release program.

“You’ll have to ask him about how he ended up flying in one of the planes he assembled,” continued Brent.

DeLoss completed basic training, which included chemical warfare training, in Sibert, Alabama. Toward the end of World War II, Nazi Germany had produced nearly 12,000 tons of a deadly chemical compound called sarin, enough to kill millions of people. The Allied Forces were afraid the Germans would use chemical warfare as a last-ditch effort to win the war. As a young soldier, DeLoss Eggleston was sprayed with gas as part of his training. Thankfully, he didn’t have to use that part of his training on the battlefield.

Eggleston was part of the 106th Infantry Division following the depletion of that division at the Battle of the Bulge. One of his first assignments was in Hamburg, Germany. He was in Europe during the armistice, and he continued to serve in Belgium as part of the army of occupation and security.

“One of his awards is the Ruptured Duck,” said Brent Eggleston at the Sons of the Utah Pioneers meeting. He went on to explain that the Ruptured Duck patch depicting an eagle inside a wreathwas worn on the uniforms of honorably discharged service personnel. It also allowed them to continue to wear the uniform for up to 30 days after they were discharged because there was a clothing shortage at the time. This showed the MPs that the soldiers were in transit and not AWOL. Although it was an eagle on the patch, soldiers thought it looked more like a duck. “They took off like a ruptured duck” became a popular saying and the nickname stuck.

“We’re honored to have a gentleman like DeLoss in our group,” said Lewis Rolling before reading the engraved plaque.