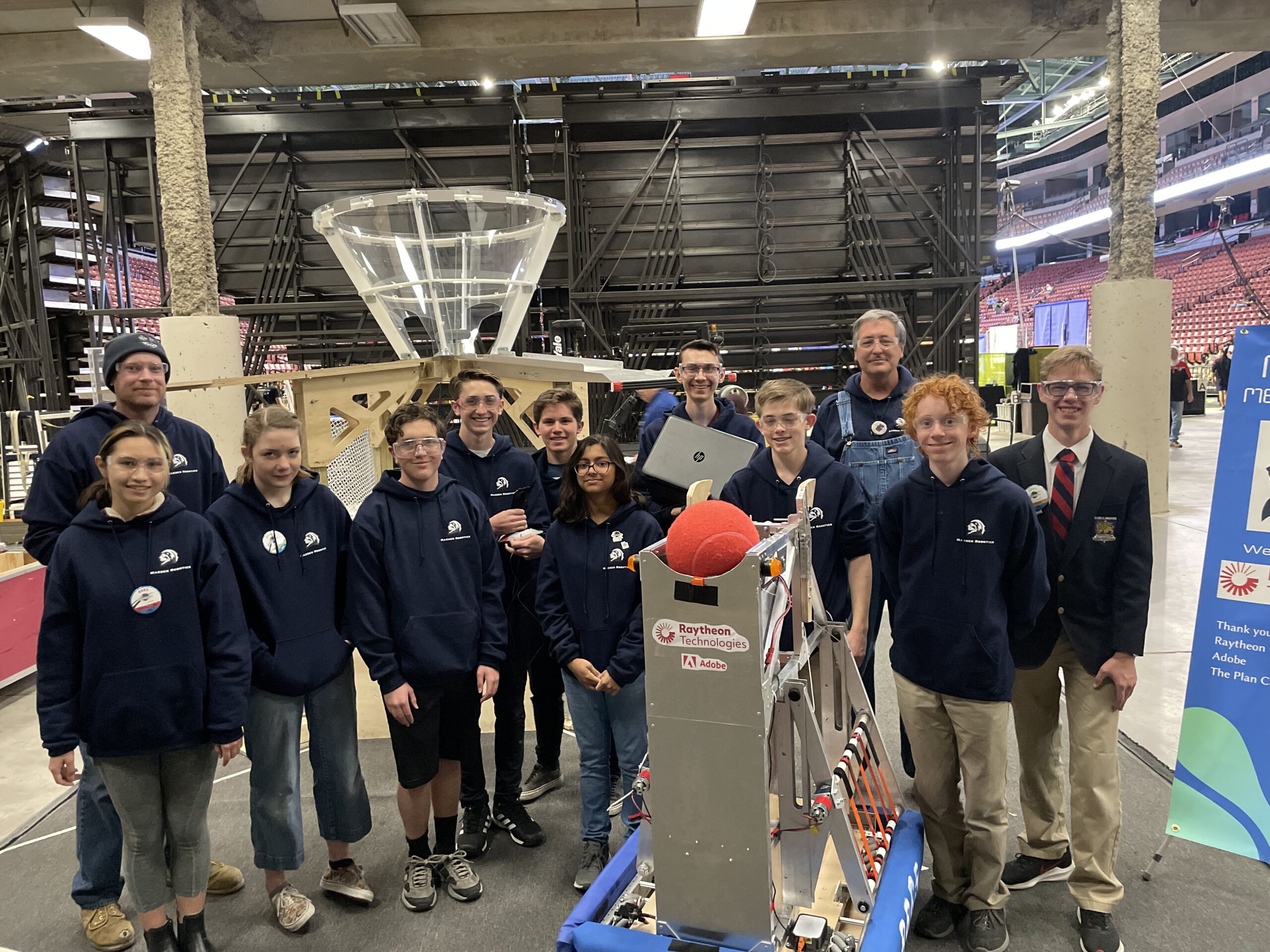 The robotics team at Karl G. Maeser Preparatory Academy, a charter school in Lindon, has only been together since Fall 2021, but the rookies are in Houston, Texas this week competing at their very first national robotics competition.

Every January Maeser Academy has three weeks they call “Winterum.” Students can choose a subject to explore all day every day of those three weeks. “One year I decided to have an engineering class for Winterum. My husband is an engineer, and my daughter is an engineering major at BYU. I thought it would be fun to have engineering projects for those three weeks,” recalled Angie Hansen, a science teacher at Maeser Academy and advisor to the robotics team. Juniors Ty Parker from American Fork and Weston Kofford from Orem were in that first engineering class and that’s where they caught the bug for robotics.

“We started with Lego Robotics, and I had my husband’s friend and co-worker Dr. David DeTienne come work with them,” Hansen continued. “Ty and Weston were brilliant at the Lego Robotics and Dr. DeTienne was blown away. They were already good at scratch programming. They designed the robots in an hour. He said, ‘You guys really need to look into starting a FIRST Robotics team.’”

FIRST (For Inspiration and Recognition of Science and Technology) is a robotics community that aims to prepare young people for the future through team-based robotics programs for ages 4 – 18 years. The international non-profit was founded by inventor Dean Kamen in 1989. DeTienne has worked with the BYU School of Engineering on their Capstone projects and is himself an engineer.

“He took the students to see what the Aims team was working on, and they said, ‘This is really cool.’ I thought it looked really hard, but Dr. DeTienne encouraged them to go for it and he volunteered to coach them for free,” said Hansen.

The Maeser team did a pre-season robotics challenge in Fall 2021 where they got a robot that was already started. In December, they competed with a robot that did simple things like throwing a ball and putting water bottles in a bucket. They came in the top ten in that competition. In January they watched a virtual kick-off to find out the challenge for this year.

“They spent four months building this robot to compete at the Utah regional level,” said Hansen. Any team can enter the regional competition, but they must qualify to move on to the national competition in Houston, Texas this week. Maeser won Rookie All-stars at the Utah regional. “It wasn’t initially announced, something went wrong in their ranking system, so we didn’t know we were going to nationals until Sunday when I saw our team on the online list. Everyone started freaking out in the group chat when we realized it,” remembered Ty Parker. The team found out on Sunday, April 10, that they were going to the national competition in Houston in nine days. The team includes nine students ranging from freshmen to juniors and includes Sean Babcock from Lehi.

“It’s a lot to process. There’s a mix of anxiety and excitement for sure,” said Weston.

Since it’s not a school-funded activity, the robotics team has had to find corporate sponsors to assist with the fees associated with their projects. “It’s made me realize how hard it is to get sponsorships. You know it’s out there; you know you can get it, but finding it is hard. There were days I’d call 30 different companies and get transferred around trying to find someone who could help me,” said Weston. “We had to raise a lot of money quickly to go to Houston.”

“Right now, robotics is just an after-school thing, and we want it to be here at Maeser permanently. We don’t have anywhere to work here at the school, no room with the equipment we need. We’ve been meeting in parents’ garages and getting tools from Home Depot down the street,” said Weston. “We’ve realized a lot of things working this way, though. Now we realize we need a set plan.”

“We’ve definitely learned a lot this year,” added Michelle Wagner, a math teacher at Maeser Academy and an advisor to the robotics team.

The team used Weston’s father’s car shop to build their robot since they didn’t have a dedicated space at school. “The car shop has tools we could use and metal-working resources that we need. Our pre-season robot was mostly made of wood, which you don’t expect to see at a robotics competition,” said Weston. “Even if you don’t have resources, you can always start somewhere.”

“We’re hoping to do some fundraising events during the summer so we can build up this program. We want it to continue after we’re gone. We need to pass on our skills and train the younger kids,” added Ty.

“I’m hoping we can do some workshops for the middle school-age students. We can have the high school robotics team members mentor the younger students. We hope that robotics becomes the Maeser sport,” added Weston.

“We made it to nationals! I’m pretty impressed with this team,” said Wagner.

Donations to the Maeser Academy Robotics Team can be made through the school.