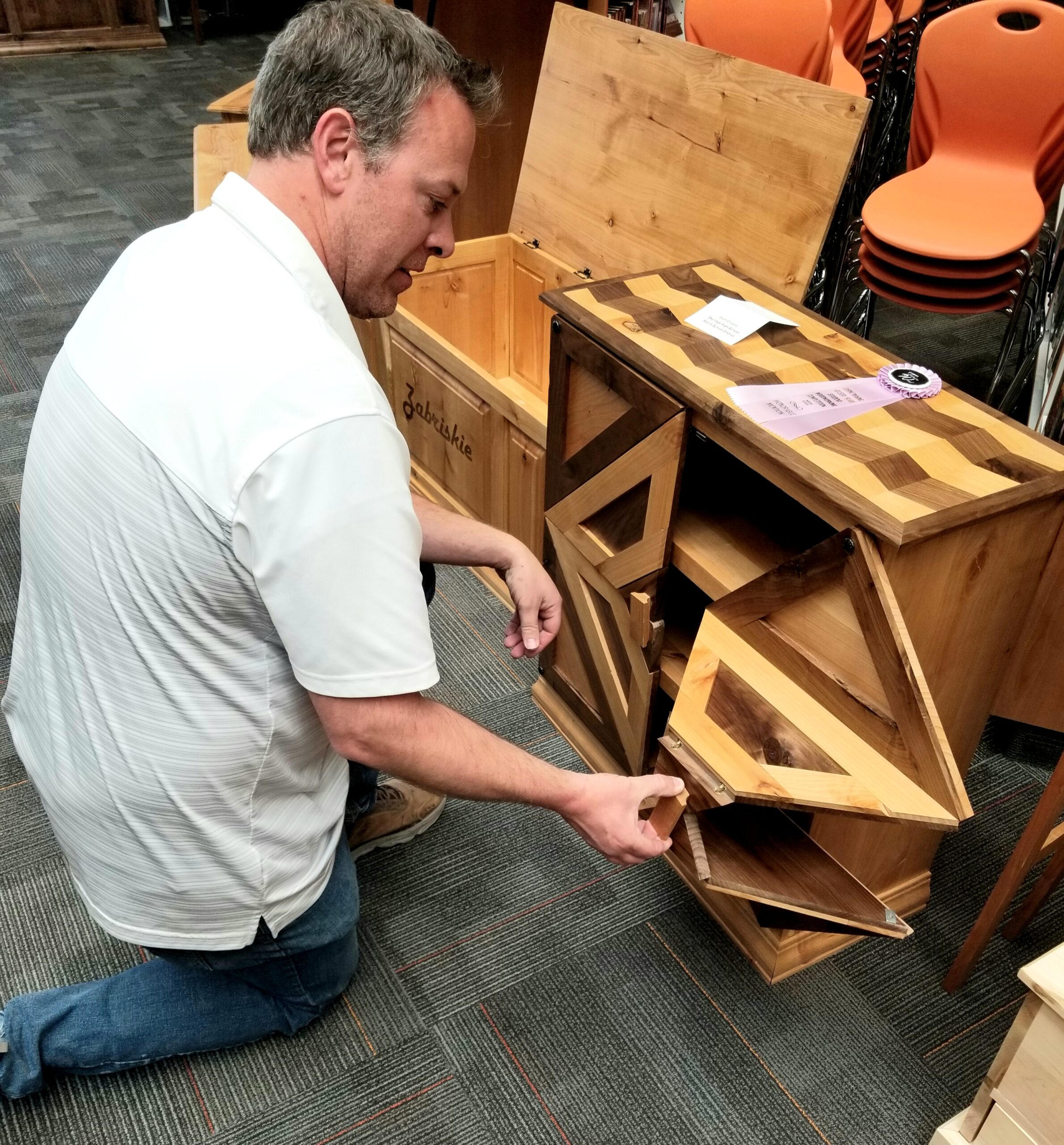 Walking into the Skyridge High School library during the last full week of school, students may have been tempted to take a nap on the queen-sized bed on display. Woodworking student Evan Walker didn’t stop at making the head and footboards, he managed to get a free mattress and sheets to go with it for the annual Woodworking Showcase.

Walker wrote to the Purple Mattress Company and asked if they would donate a mattress to go with his bed. “He used the skills he learned in his English class, wrote them a letter and sent a photo of the bed and they gave him the mattress for free,” said Joe Karlsven, woodworking teacher at SHS. “I thought it was so cool that he was ambitious enough to do all that on his own.” Minky Couture donated a blanket to Skyridge student Jayden Bateman to better display his handmade chest.

Joe Karlsven is teaching more than the craft of woodworking in his classes at Skyridge. Woodworking students decide on their own projects and plans. For the class, each student makes an original piece of furniture. “One thing I try to tell them is not to think of what they need right now, think about what you’re going to need in the future when you have your own house,” said Karlsven.

Karlsven is still using some of the furniture he made in his high school woodshop class.

New to the curriculum this year are handmade guitars and ukuleles. “It was a huge success – I loved it,” said Karlsven.

“It was super difficult having 25 students working on them all at the same time and one jig to work with,” explained Karlsven. “I made a lot of videos on YouTube so they could watch the videos outside of class and know what to do during class.”

Karlsven created six YouTube videos with step-by-step instructions on how to make a ukulele. “The whole time I was thinking, ‘How do I clone myself?’ I need one-on-one with every kid.” Creating the YouTube series allowed Karlsven to work alongside each student.

Koa Nahinu is from Hawaii and carved the islands into the body of his ukulele for the soundhole. “I told them they didn’t have to have a plain round hole, they could do inlays and be creative,” remembered Karlsven. “I really didn’t know if the shape of the hole would affect the sound, but Koa’s ukulele sounds beautiful.” Koa also added carvings on the fretboard of his ukulele.

“I spent way more time with this class than any other, but it was so fun. It’s been the best class I’ve ever had,” Karlsven said. He plans to tweak a few things, but he’s definitely offering the guitar and ukulele-making class again.

“Right now, the guitars are very simple. They’re still beautiful and they sound great, but I want to work more on the inlays,” said Karlsven. The full-size guitars are patterned after a Taylor 412 steel-string guitar, which retails for about $3,000. The student-made ukuleles would cost $300 in a store.

Every year Karlsven chooses a Woodworker of the Year from his classes and Seth Criddle took the honor for 2022. Criddlemade several items in the Woodworking Showcase, including a guitar, tables with intricate inlays and a small cabinet with doors that open like a puzzle. “He described a door that he’d seen, and I didn’t think it was possible,” said Karlsven. “I told him, ‘You’re on your own.’” Criddle worked on the problem, consulting with Karlsven occasionally before finally figuring out how to make the cabinet doors which open and shut smoothly as they collapsed. Karlsven submitted Criddle’s cabinet and Jayden Bateman’s chest to the student woodworking competition Utah’s Talent in Wood and both won one of the few awards given statewide.

“I don’t expect these to be woodworkers when they’re older, maybe some of them will, but the skills they’re learning now – problem solving and critical thinking – those are absolutely things they’ll use,” said Karlsven.