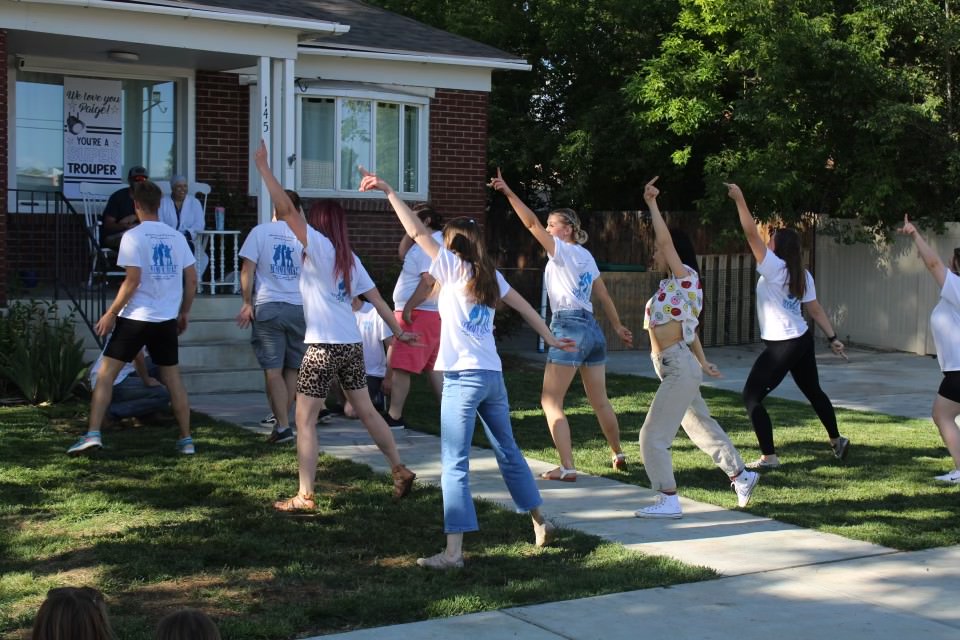 Monday night the Timpanogos Arts Foundation came together to give Councilwoman Paige Albrecht an exclusive showing of “Mama Mia!” which took place right in her front yard. The original production debuted at the American Fork Community Theater April 22 through May 7; however, Albrecht was not able to attend due to her cancer treatments.

As one of the lead roles, McKinnon was contacted by Albrecht’s husband, Sterling Bronson, about the possibility of performing a surprise show that could be watched from the comfort and safety of their own home.

Monday’s performance happened weeks after the show’s closing night, so McKinnon was unsure she could gather fellow performers to make it happen. After connecting with the cast members, they expressed an overwhelming desire to show support for Albrecht, and to give her the experience of seeing the play. The cast performed the entire show in Albrecht’s front yard and street.

“We had almost everybody here except for maybe three or four cast members who couldn’t make it,” McKinnon said. “They were all totally on-board and were so excited to do this for Paige.”

The cast performed the entire storyline of the play with as much enthusiasm and devotion as if it were opening night. It was clear that Albrecht cherished the experience, as she did not stop smiling until the very end. Albrecht and various cast members burst into joyous tears as the heartwarming performance ended.

Bystanders could see how sad the cast was to be performing together for the last time as more tears were shed while saying their final goodbyes. “We are a very close-knit cast as you can tell, and we love each other fiercely.” McKinnon said. “This was an extremely bittersweet moment that will be treasured forever.”