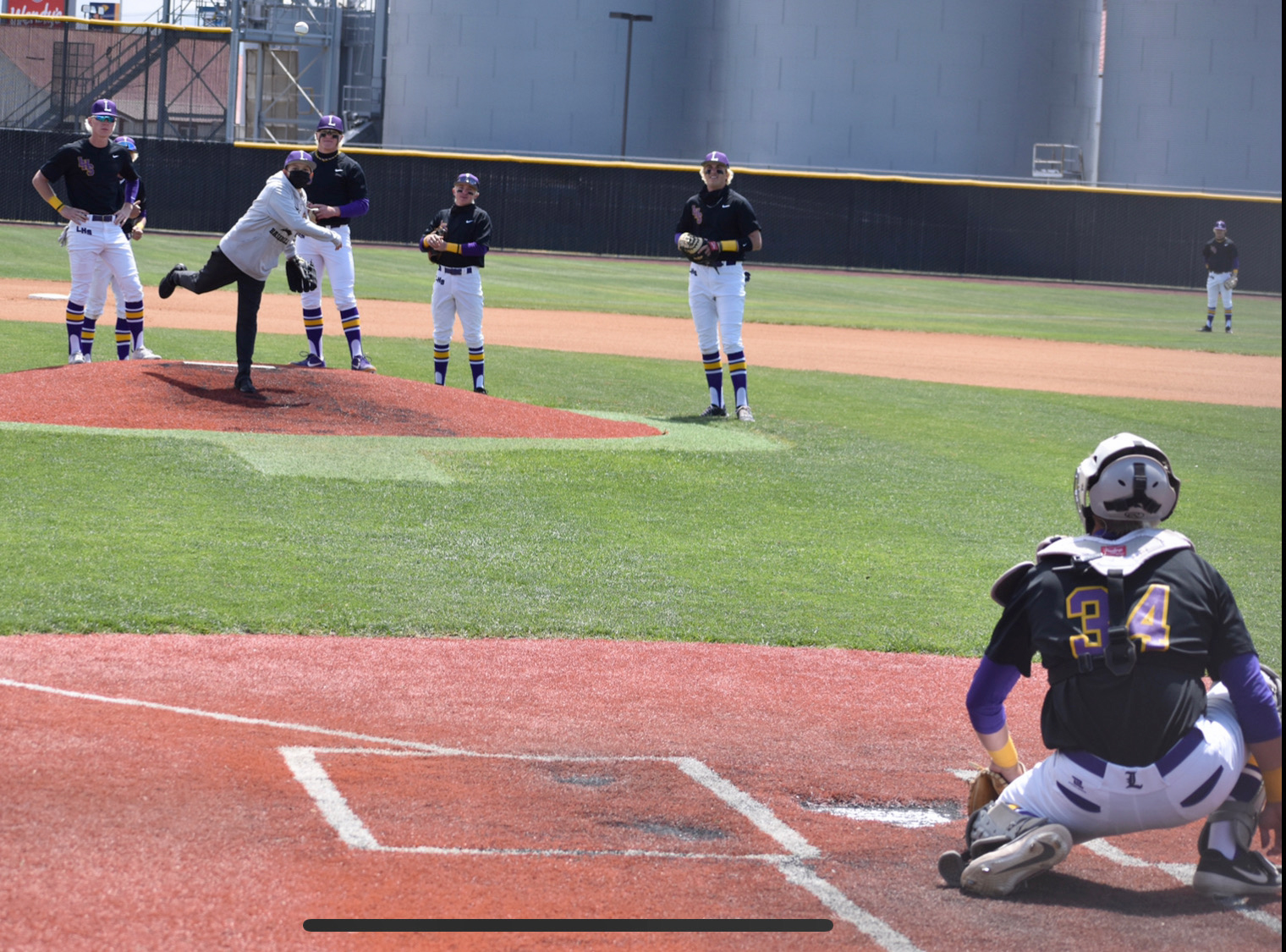 Like most high school coaches, Lehi’s baseball skipper Jason Ingersoll realizes that the most important lessons his players will learn as part of his program will likely have little to do with the sport that brings them together.

Prep athletics are a great opportunity for young people to learn life skills and to develop perspectives that will assist them as they move into adulthood and continue forward with their lives.

For Ingersoll and his staff, the developmental part of their responsibilities as teacher-coaches is foremost in their minds as they make deliberate choices to involve their players in activities which will help them break out of the myopic self-absorption that plagues many teenagers.

When Ingersoll took the job at Lehi, he inherited a Mascot Bowl program that raised money which was used to provide for the needs of underprivileged children. Once that effort was discontinued, program members decided to start their own tradition of providing Christmas for a few needy families.

This effort has continued for the past seven years. Members of the baseball community reach out to those who are aware of some unmet needs to identify families who could use assistance without them being aware of it.

“I want these kids to understand how good they have it,” Ingersoll said. “Some of those we help are their peers in school. It’s good for them to forget about themselves for a little bit and focus on helping others.”

The coach said that the baseball parents have rallied around this effort as well. The players get involved with selecting the items to be presented – often necessities like clothes and shoes as well as toys for the children.

Sometimes the parents have had them hide the gifts so the family actually receives them on Christmas. Aside from this annual tradition, members of the baseball community have occasionally assisted players in the program with clothes and equipment for the sport that they couldn’t afford on their own.

This and similar efforts have led to some of the players volunteering to be peer tutors at school – students who are assigned to mentor and help other students with various disabilities. Ingersoll said the players have embraced having a few of these students as team managers over the years.

This season, it was Andrew Baker, a freshman at Willow Creek Middle School. His mother, Megan Baker, said she was surprised to receive a call from her son in the early spring asking her to pick him up and take him to baseball tryouts after school.

She said they arrived late and didn’t know what they were doing, so they sat in the bleachers at first. Monica Ingersoll, Jason’s wife, noticed them and after a brief conversation, she took Drew over to the dugout.

He added that they kept an eye on him during tryouts to make sure he was safe and then invited him to join the team as a manager. Megan said she had to reinforce this invitation at home because he hadn’t quite grasped it yet.

Monica personally delivered his uniform items and Megan said the players always welcome him whenever they see him with hugs and fist bumps.

This happened at school too, where he was similarly greeted by freshman players in the program, including one of Madsen’s sons, as well as Kacie Ingersoll, the coach’s daughter.

Megan said Drew had participated in many sports previously, but always on adaptive teams. “He just wants to play with his regular peers and more than anything, he wants to have friends,” she said. “The way the boys treat him has changed his life.

“When he’s out on the field, he feels he belongs there,” Megan added. “Everybody knows him and they’re kind but now he knows he is loved as well. He was able to share something that he’s seen others have all his life but never personally experienced. Being part of the team has made all the difference.”

There are also times when life throws people a curve ball when it’s least expected. That’s what happened to Dane Avina, a 14-year-old multi-sport athlete who developed some bafflingsymptoms in February.

He’s the son of Jon and Amanda Avina and will be a freshman at Willow Creek in the fall. His older brother Taye, 15, is an incoming sophomore and was a member of the baseball program this year.

Dane spent spring break in the hospital as the medical staff tried to figure out what was wrong with him. The diagnosis was a shock to everyone: anaplastic large cell lymphoma (ALCL), a rare type of T-cell non-Hodgkin lymphoma (NHL).

He was unable to return to school once he started treatment, but this cancer has a high survival rate when caught early and Amanda said he’s doing well. He just finished round three of six treatments and the family is hopeful he can return to school sometime before the end of the year.

Dane was involved in football and wrestling as well as baseball, and members of the Lehi youth football program made bracelets and sold them through various teams, including the baseball one, with the proceeds being donated to help the family meet their medical expenses.

In addition, Corina Crutchfield, a football little league parent, approached the family about Dane throwing out a ceremonial first pitch during the state tournament. They agreed, and he did so during the Springville game on May 20, the last contest the Pioneers played at home.

The proceeds from the concessions sold during both Springville super regional games were also donated to the family. In addition, Dane was the prince for the Millie’s football run this year, which involved the Lehi football and cross-country teams in raising funds for kids with cancer.

With some emotion in her voice, Amanda said, “It’s been amazing to get this help from everybody. We don’t wish this on anyone ever but we wish everyone could feel the love and support that we’ve received.

“It’s the little things that matter so much,” she continued.“Throwing a baseball may seem like a small thing but it liftedhis spirits so much. The boys were high-fiving him and checking in on him as he sat in the dugout during the game, the players, the coaches, everybody.”

Jason Ingersoll said the coaching staff were aware of Dane as one of the better players in his age group and reached out to see if there was anything the team could do once they became aware of the situation. He said wearing the bracelets helps remind his players of what Dane is going through.

“This is another thing to help them know how fortunate they are to be healthy and still have the opportunity to play,” the coach said. “When they were struggling or baseball was hard it helpedthem to know there are people going through harder things. That’s why we got behind the effort.”

A different player on the team received a phone call from his father during weight training in April that his grandmother had just been diagnosed with breast cancer. He could have left to go home, but they agreed that the best place for him to be right then was lifting with the team.

“Everybody put an arm around him and made him know they love him and his family and grandma,” Ingersoll said. The players started putting her initials on their wristbands to show their support to him and the family.

“The kids and coaching staff reached out to ask if there was anything they could do and made sure he knew he had their support,” the coach continued. “These kinds of things are hard to deal with at any age but especially when you’re 17 and your family is close.

“The last thing you want to do is stop what you’re doing,” Ingersoll said. “You try to keep some normalcy in your day-to-day life and try to keep working hard. I think this gave our kids a little bit of extra motivation too.”

The recipient of this attention prefers to remain anonymous because she doesn’t like the spotlight, but her husband said the good positive support has helped. The softball team has a connection to the family as well and has also been involved in the effort.

“It’s what helps you have faith and courage to press forward when there’s people who care,” he added. “It’s hard to pin down what it does for you exactly, but the wonderful, positive interest from these teenagers has given my wife quite a lift.”

This is just a sampling of what the baseball players and members of other teams have been doing to help out in the greater community. One year the baseball team went to Pioneer Park to help feed the homeless, and the coach said they’re always open to new ideas.

“Every year we’re looking for opportunities for the players to step away from baseball to serve others,” he said. He invited community members with appropriate suggestions to contact him at jasoningersoll@alpinedistrict.org.