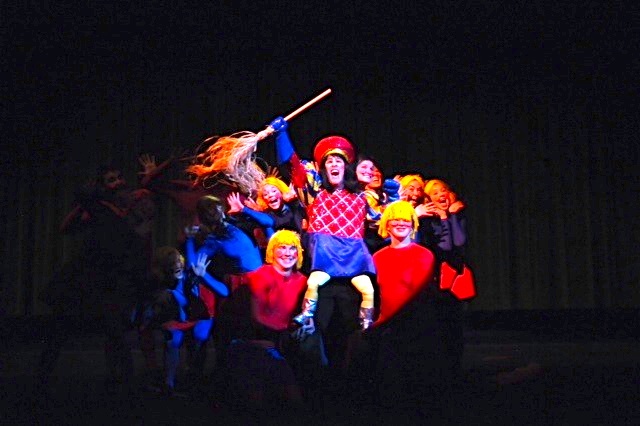 “We have a 20-foot puppet dragon in our garage right now – neighbor kids ride by on their bikes to see it,” laughed Colleen Carrassco, one of the founders of Regalo Theater Company and co-director with her husband Michael of the company’s first show “Shrek the Musical.” Their debut production starts Friday,July 15, at the Skyridge Auditorium.

Theater productions are not for the faint of heart, but the team behind this fairytale has risen to the challenge. “So much goes into building a show,” Colleen continued. “Everyone involved in the process is at the top of their game and stepping in to help with costumes and sets on the weekends.”

Regalo Theater Company includes many familiar faces from the Lehi arts community. Amy Handy is in charge of costumes for “Shrek the Musical,” and her husband Mike has created numerous props for the show. “The costumes for Shrek have been no small undertaking. With a large cast and a wide variety of characters, costuming this show has been challenging but also very fulfilling for me creatively,” said Amy.

“As a prop maker, ‘Shrek the Musical’ presents all kinds of interesting opportunities,” added Mike Handy. “This show has three times as many props as most others, and they’re very specific to Shrek. At least half of them have to do with a humorous sight gag or parody of another Broadway show.”

Former Miss Lehi and current coach of the Skyridge Ballroom Team Jessica Adams is the choreographer for the musical. Adams has been dancing and choreographing for 18 years, but this is her first time doing a theater production. “I always enjoy watching Jessica’s dancers. She tells a story with her choreography, and I knew we wanted her to be part of this show,” said Colleen.

The Musical Director for Regalo’s “Shrek the Musical” is Chip Brown, a recent Utah High School Musical Theater winner of Best Orchestra with Gavin Webecke and Ella Petersen for the Skyridge production of “Urinetown.” Chip has been honing his theater skills for years at Skyridge, where his father, John Brown, is the drama teacher. He’s dipping his toes in community productions, having co-directed “Sweeny Todd” at the American Fork Community Theater within the last year.

John Brown is directing the technical side of “Shrek the Musical” in his familiar auditorium at Skyridge. This time, though, he’s working with a wide range of actors with much more experience than in a high school production.

“The entire ensemble cast is so strong – many of them could easily play lead parts,” said Colleen Carrassco. “The chemistry between the three leads is fantastic.” B.J. Oldroyd is Shrek, Sidney Henderson is Fiona, and Tayvin Bayless is Donkey. Seasoned actor and director Steve Colson has been cracking up Oldroyd and Henderson in every rehearsal as Lord Farquaad. “On one hand, I love that he’s so funny, but now that we’re getting close to opening night Shrek and Fiona need to keep it together,” laughed Colleen.

“We really want this to be a show families can experience and enjoy together,” said Colleen.