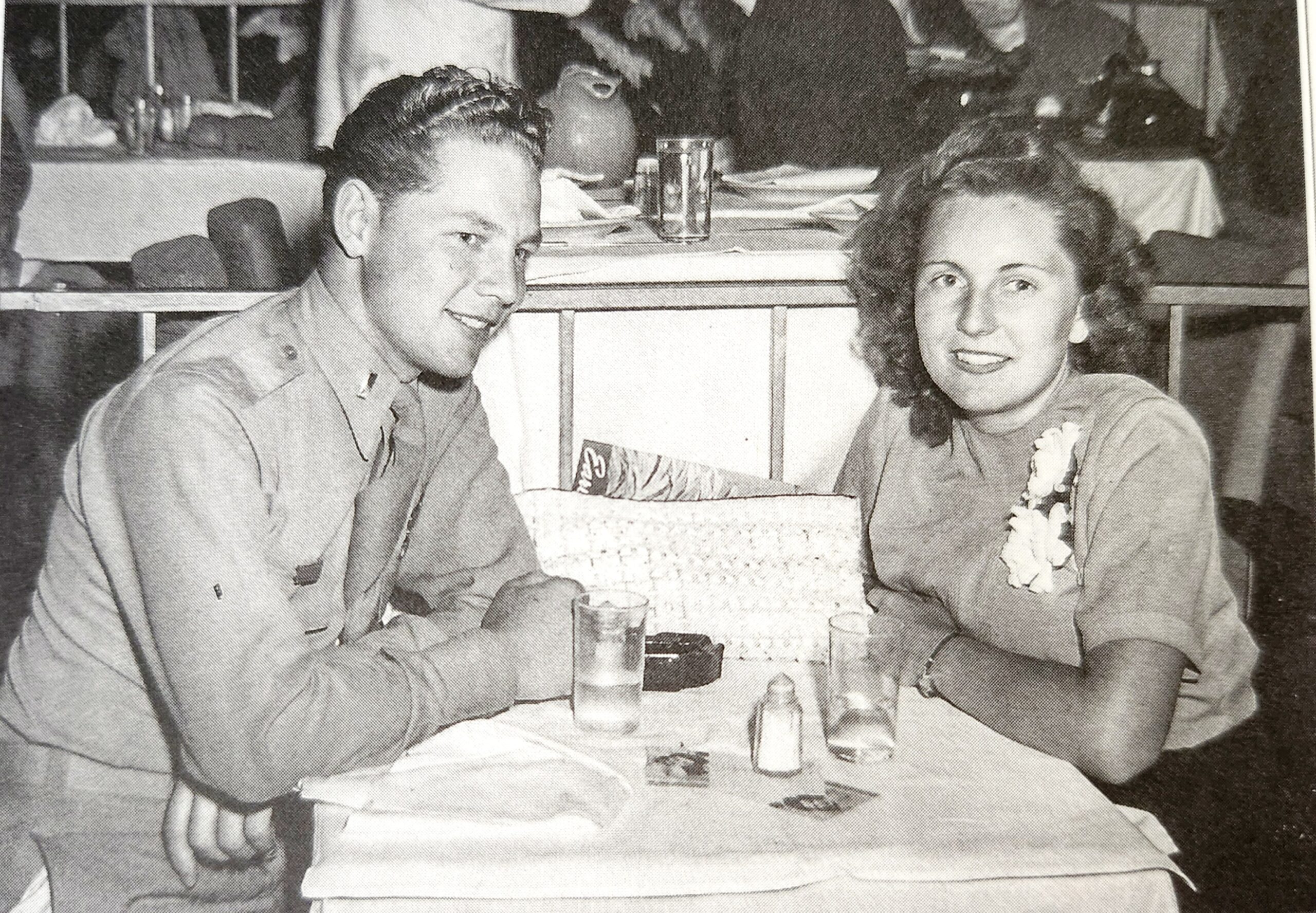 Author Kenneth D. Evans stood near the spot where his parents’ journey began on Tuesday, July 12, and told the Point of the Mountain Chamber of Commerce the “story behind the story” of his book Missing: A World War II Story of Love, Friendships, Courage, and Survival at the Hutchings Museum.

Evans’s father, Donald Evans, graduated from Lehi High School in 1941 and became a fighter pilot in World War II. His mother, Laura Jeanne Brown, lived across the street from the museum and went to Lehi High as well. Donald Evans and three of Ken Evans’s uncles’ names are on the Veteran’s plaque at Hutchings Museum.

“Most people knew my father as a soft-spoken, kind and gentle man, a church leader, a successful businessman, a member of the Alpine School Board, a devoted family man and someone who always found time to lend a sympathetic ear to those with troubles,” said Ken Evans.

Most people didn’t know that Don Evans was shot down in the Ardennes Forest in France and became a prisoner of war. “Like many from the ‘greatest generation,’ my father rarely talked about the war. And yet, what happened to him during it changed his life forever,” said Ken.

“I think my father suffered from PTSD most of his life. Somehow, he was able to suppress the worst of his war memories, pushing them somewhere in the back of his mind, but I don’t think they ever disappeared,” Evans continued. Don Evans’s plane was shot down. He was captured and forced to march a great distance and was interrogated by the Nazis.

Laura Jeanne Brown Evans kept detailed scrapbooks of her life with Don and more than 300 letters they exchanged while they were apart during their courtship and the first few years of their marriage. Laura Jeanne wrote her own compelling life history after Don’s death in 1999. Following his mother’s death in 2011, Ken Evans and his sister discovered a box of love letters his father had written his mother.

“Reading those letters allowed me to travel back in time and glimpse the events of my parents’ lives through their eyes,” said Ken. “As I delved into the letters, I felt compelled to write what I was learning about the man I had idolized since I was a young boy.”

Ken Evans never planned on being a writer. “Come on, who would want to read a book written by a CPA?” he joked. “But I did want to document what I was discovering and preserve it for my father’s posterity.”

Starting in 2012, Ken tracked down the living members of “The Five” – the nickname for the group of P-47 pilots who were best friends in the 368th Fighter Group of the U.S. Ninth Air Force. With their help, Evans recreated his father’s war experiences and became friends with his father’s war-time buddies in the process. In 2017, Ken, his wife and sister traveled to Europe and walked where his father walked and visited the memorial that stands where Don Evans was a prisoner of war.

“My mother was quite private when it came to my parents’ story,” said Ken. “Knowing I was interested in writing about their war story, she made me promise I wouldn’t do so until after she passed away.”

Missing was released on March 28, 2019, Don Evans’s birthday. It has received more than a dozen prestigious writing awards and is available in hardback at the Hutchings Museum gift shop andin paperback and audio versions online.