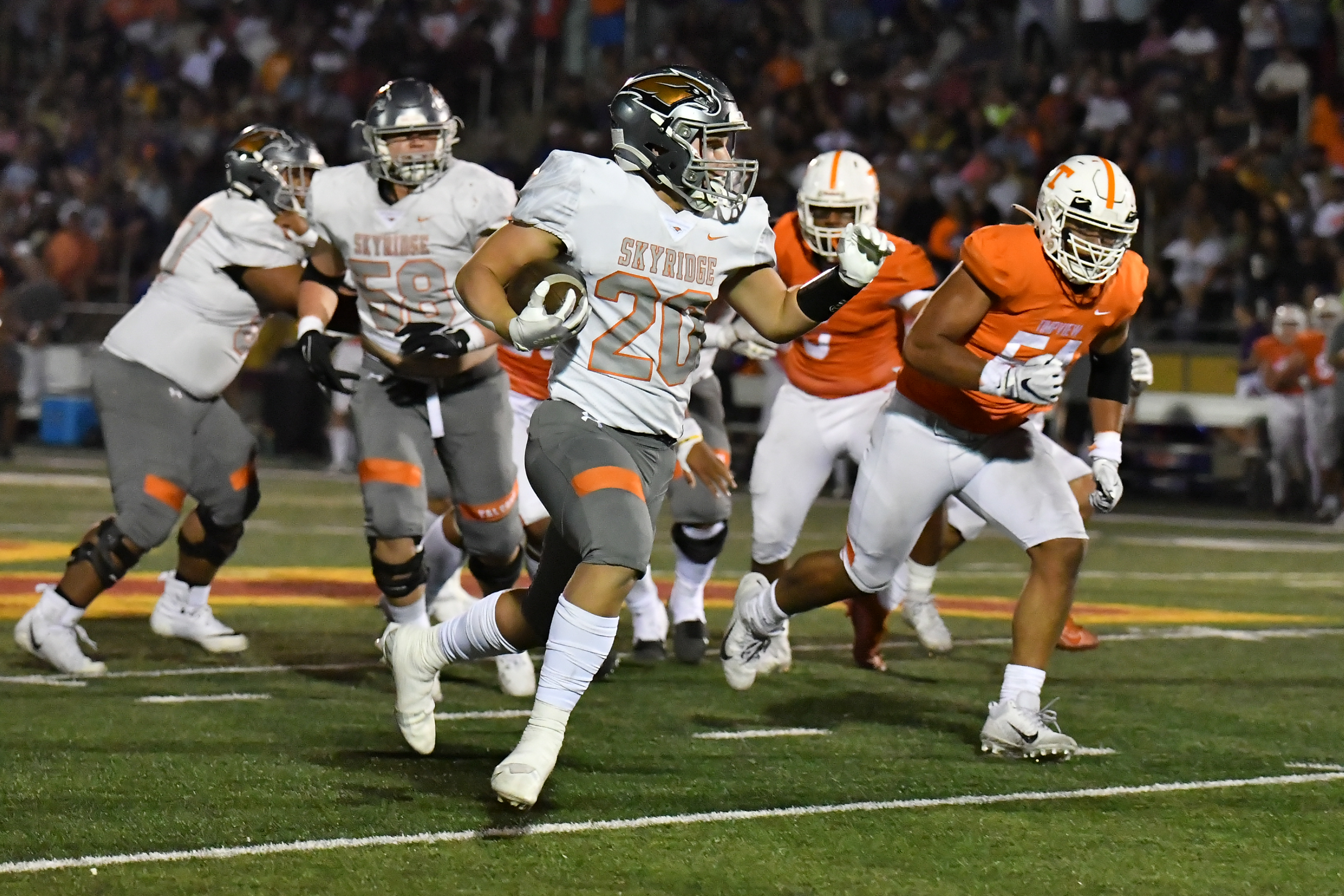 The Skyridge football team had their way with the Timpview Thunderbirds at Mountain View in what turned out to be a nail-biter of a win.

Adversity struck early in the second play of the first Falcondrive when senior quarterback McCae Hillstead was injured and unable to play the rest of the game.

Without the starting quarterback, the Falcons scored all of their points while the defense held Timpview’s potent offense in check as Skyridge earned a taut 20-13 victory.

Backup quarterback Trent Call, a junior, finished with two total touchdowns which included the game-winning touchdown on a three-yard run.

Senior receiver Cannon Jensen made a diving catch in the end zone from eight yards out. Senior linebacker Collin Sheffield scored early in the third quarter with a 19-yard pick-six which set the tone for the Falcons for the rest of the game.

The Falcon offensive line dominated the line of scrimmage by converting on third downs and keeping the Thunderbird offense off the field while running the clock in the second half of the game.

Justin Hemm, Skyridge offensive coordinator said, “Trent Call did a wonderful job tonight. He has been battling for a position both at wide receiver and also for the number two quarterback spot.

“He has grinded and is a competitor. One thing we’ve never questioned with him is his confidence, for him to step into this moment, he was ready to go.”

“Call came in and executed the offense very well,” Hemm continued. “Our offensive line stepped up, the receivers stepped up in the run game and our running backs stepped up. All those guys stepped up tonight and played to win.”

Call said, “I’m feeling good about the win. Our team balled out tonight. The O-line had my back tonight and they all played tough. I felt prepared tonight, I’ve worked hard and waited for this moment and it means a lot. My coaches trust me, and I appreciated their confidence in me tonight.”

The Falcon defense forced three Timpview turnovers and limited Timpview’s scoring to the first half. The Falcon defense remained steady and dominant even after losing a second starting player to injury, senior linebacker Elijah Terripaia.

Senior safety Saxon Higbee did his part by intercepting the Thunderbird quarterback and helped the defense limit scoring opportunities for Timpview.

Junior defensive lineman Ian Mariner contributed to the defensive effort by sacking the Thunderbird quarterback and helping the Falcons achieve several tackles for loss. It was a team effort as the Falcons executed well and fought hard to overcome the adversities of the game.

“It was a crazy game and a great team win,” Sheffield said. “We had two guys go down tonight but a lot of players also stepped up for the team effort. The offensive line played their tails off tonight and the D-line came in and made big plays. We had adversity and overcame it,” he said.

Skyridge Head Coach Jon Lehman said, “There was a lot of adversity tonight, our guys just dug down deep and fought from the beginning. McCae goes down early with an injury and then Elijah Teriipaia goes down and our guys stuck together and fought.

“The pick at the beginning of the third quarter that goes for six from Collin Sheffield was obviously a statement for us, it let our guys know that they could dig in and go,” he continued.

“The last drive by the offense, with minutes on the clock, was intense as they drove all the way down the field. I’m proud of our offense for grinding it out.”

He added, “Trent didn’t get the reps throughout the week in practice, but he was still prepared to go out and play football. I’m proud of him for settling down and doing his job tonight.”

Skyridge remains undefeated for the season with a 5-0 record, giving Timpview its first loss of the year. The Falcons will take on the Westlake Thunder at home for their first region game on Friday (Sept. 16) at 7 p.m.