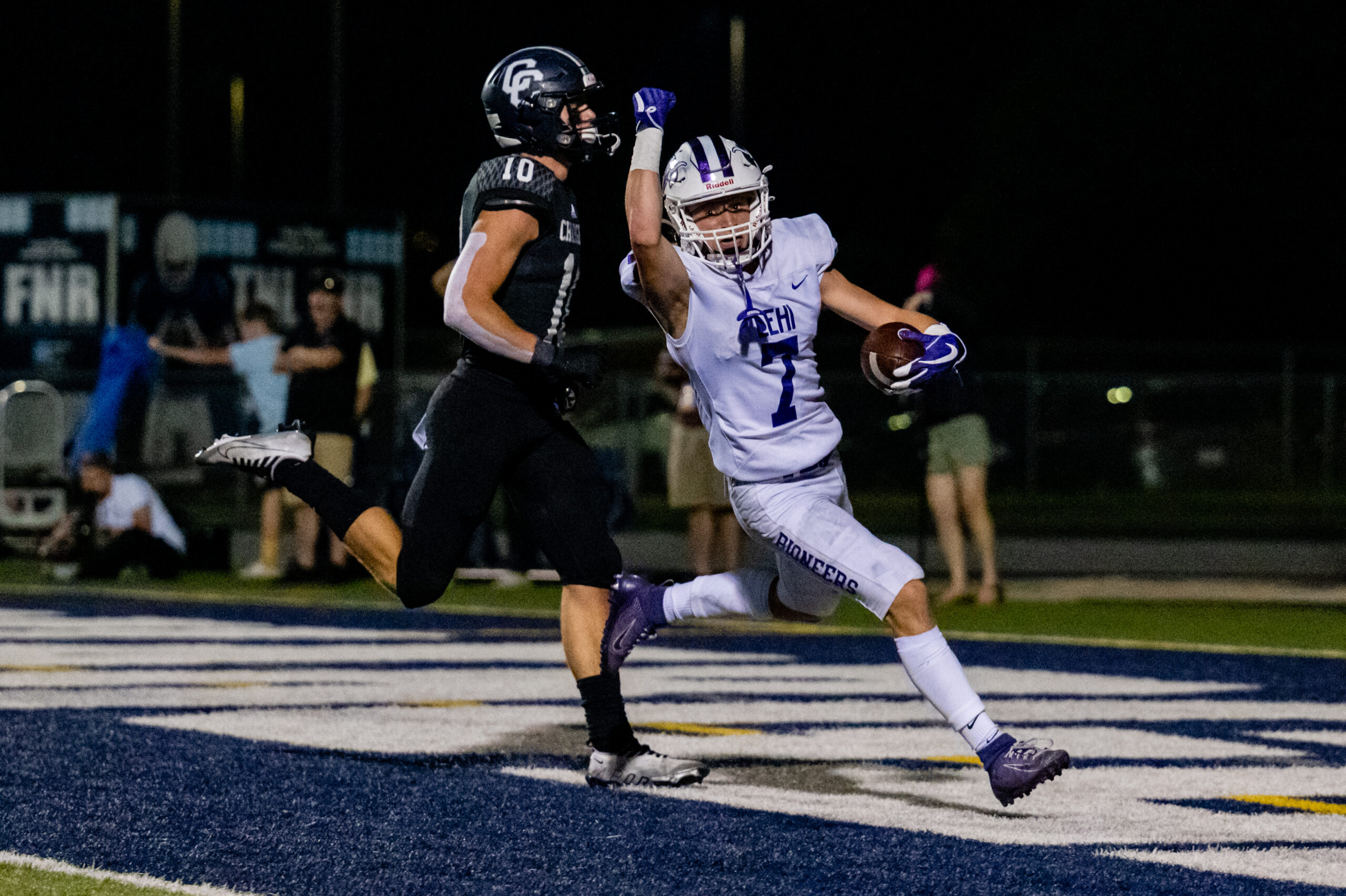 In a game riddled with the kind of mistakes that happen when the competition and stakes are high, the Lehi football team recovered from a first half of missed opportunities and a big deficit to out-perform homestanding Corner Canyon after the break to earn a 25-24 victory.

This game wasn’t pretty for either side. The Pioneers made two fruitless trips inside the red zone in the first half, had two huge returns by senior Kadiyon Sweat called back on penalties, and found themselves trailing 0-24 early in the third quarter after giving the Chargers a short field which they capitalized on.

However, there was no panic. This championship team, with a stable full of battle-tested performers, methodically whacked away at the home school’s advantage.

With better offensive execution and relentless defensive pressure, the Lehi faithful watched their team pull off one of the biggest wins in school history in a championship-like atmosphere.

“What makes this such a big one is that they’ve been so good for so long,” said Coach Ed Larson. “I still expect to see them playing in the last week of the season, but I’m so proud of our kids and the grit that they showed.

“There were so many heroes on the team tonight,” he added. “This is a really good, tough contest for us and should help us get ready for the rest of the season.”

The Pioneers started their first successful drive at their own 28 after a penalty wiped out one of Sweat’s huge returns. They used short runs and passes to move the ball and got some help from a big pass interference call midway through the drive.

Lehi finally broke the plane when senior wide receiver Kolton Tanner hauled in a 14-yard catch that one of his defenders tried to rip out of his hands. Because of the score, the Pioneers tried to go for two but were unable to convert, making it 6-24 at the 6:10 mark of the third quarter.

A Corner Canyon penalty on the attempt was added to the kickoff spot. Given the two-score deficit, Lehi went for a pooch kick and it was recovered by senior tight end Makafefie Havea at the 18-yard line.

Two plays later, Havea had the ball in his hands again after receiving a pass in the end zone for a touchdown. Senior kicker Nate Shepherd’s PAT was good, making it 13-24 with 4:48 still to go in the period.

As the Chargers started their next drive, the snaps began to go awry. A high one ended up on the turf, where it was covered by senior defensive end Isaac Terrell at the 16-yard line.

On second down, senior running back Carson Gonzalez burst through a huge hole opened by the offensive line and made a couple of sweet cuts to reach the 1-yard line.

Two plays later, junior running back Kolose Latu churned his way into the end zone. Lehi tried a trick play to get the two points that didn’t work, so the score was 19-24 with 2:58 left in the third.

The teams traded punts and then traded fumbles. On the one that made a difference, sophomore offensive lineman Kainoa Fonoimoana stripped the ball from the Charger carrier and senior defensive back Nathan Anderegg recovered it at the Lehi 39.

The Pioneers again used short gains to move the ball for a couple of first downs. This may have sucked in the defense, because on the first play of the third series, senior quarterback Jackson Brousseau connected with junior wide receiver Jace John for a 37-yard score with 8:08 to play.

The two-point try was again no good, giving the host school the opportunity to win the game with just a field goal.

The defense and their own penalties snuffed out the next Corner Canyon possession, but the Pioneers weren’t able to get very far either on their subsequent drive.

However, when it looked like they were going to try for a first down near midfield, Brousseau made a quick kick instead and it was downed at the Charger 7 with 1:36 left to play.

Despite continued pressure from the Lehi front seven and their own miscues, Corner Canyon still earned a 35-yard field goal try with four seconds left. Anderegg brought the pressure and the kick bounced off the right upright to spark an exuberant celebration by the Pioneers.