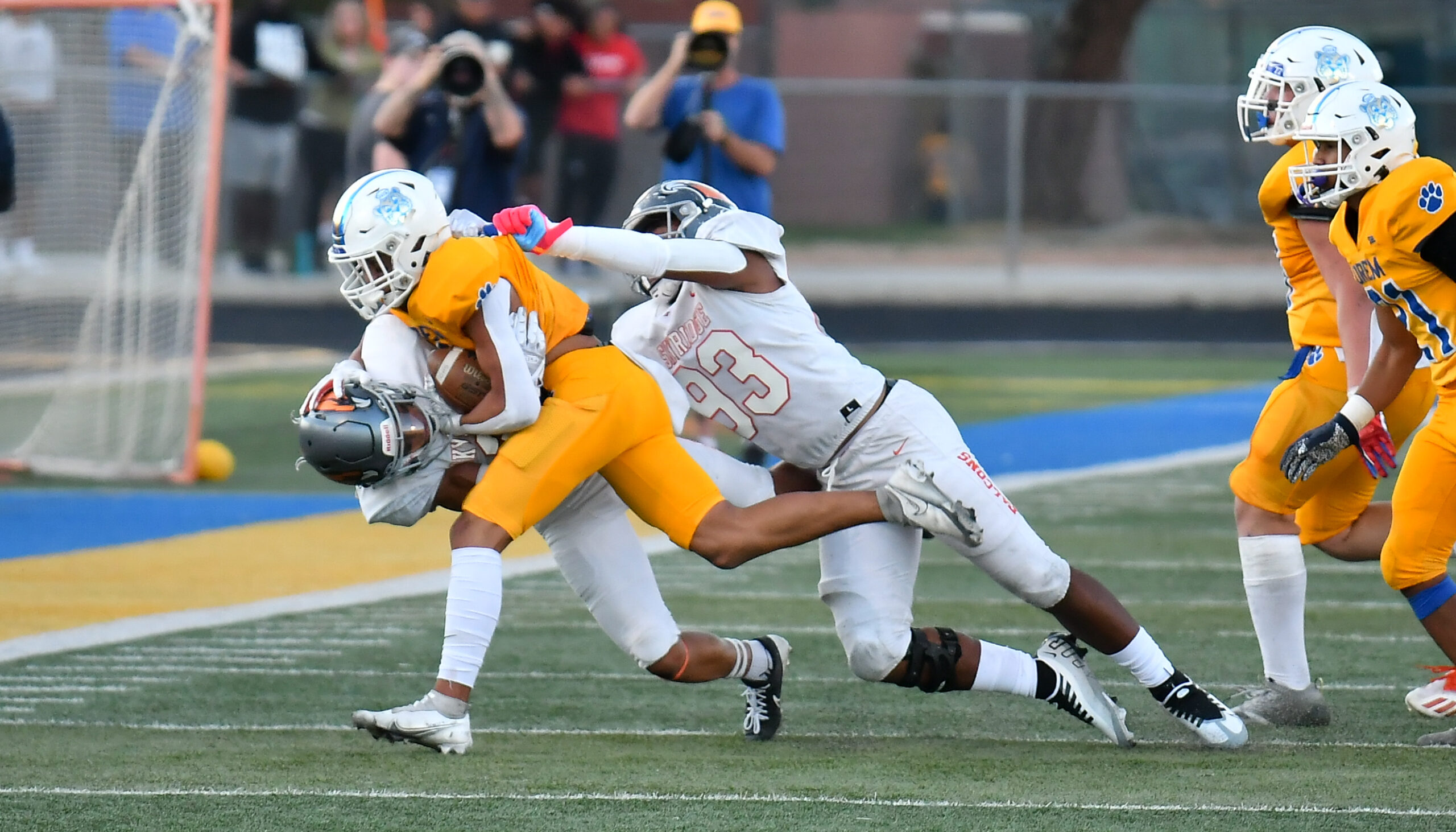 It was another walkover victory for the Skyridge football team, which dominated the field and outscored Orem 54-7 on the road.

Senior quarterback, McCae Hillstead threw for two touchdowns and ran for one more. The overall Falcon performance led to a convincing victory as they were too much to handle for the Tigers.

The Skyridge offense is averaging a walloping 48 points a game. Senior receiver Cannon Jensen and junior La’alea Kalama each grabbed a touchdown on the run while sophomore running back Zaeden Selu and junior Carter Sheffield each rushed for a touchdown to complete the standout offensive performance.

Skyridge offensive coordinator Justin Hemm said, “Offensively, we were able to do some good things, running the ball, but we need to get a little more efficient with passing the ball all the way around. It will be something we continue to work with and improve on. “

The Falcon defense gave another impressive performance as they held the Tigers to seven points and frustrated their offense all night long.  Senior safety Saxon Higbee intercepted the ball twice and senior outside linebacker Sione Westover intercepted the ball and ran 95 yards for a touchdown.

Higbee said, “Lots of preparation for tonight resulted in a win. We came in and we didn’t really know what they were going to do.

“We saw in past films that Orem was switching it up and doing different things. We came in ready with every little detail and we had a million different things planned. It was nice to be ready to play tonight,” the player said.

Hemm said, “Defense made some amazing plays tonight. They executed well and did some really good things. Defensively, Tausili (Akana) had a wonderful game and up front our guys have improved each week.

“Where they were when we started at camp to where they are now, it is a whole different group. It is exciting to see them progress,” he added.

The Skyridge special teams also contributed to the win as Ian Keesler totaled one field goal and five PATs for the game and Kalama scored a punt return touchdown.

“I thought we started fast with all three phases, offense, defense and special teams,” said Skyridge Head Coach Jon Lehman. “Defensively, really good job on taking the ball away on the first half and getting pressure on the Orem quarterback and forcing some mistakes. It was a good overall win for the team.”

He added, “Tausili Akana had a really good game from the jump. He was pressuring the Tiger quarterback, shut down the run game and really affected all areas. Saxon Higbee as well with two interceptions made a difference. The offensive line played really well tonight as well.”

The Skyridge offense has been consistently excellent throughout the season and defense has been overpowering, giving up only 14 points on the year.

The Falcons will face their strongest opponent in the Thunderbirds at Timpview High School on Friday (Sept. 9) with a 7 p.m. kickoff.