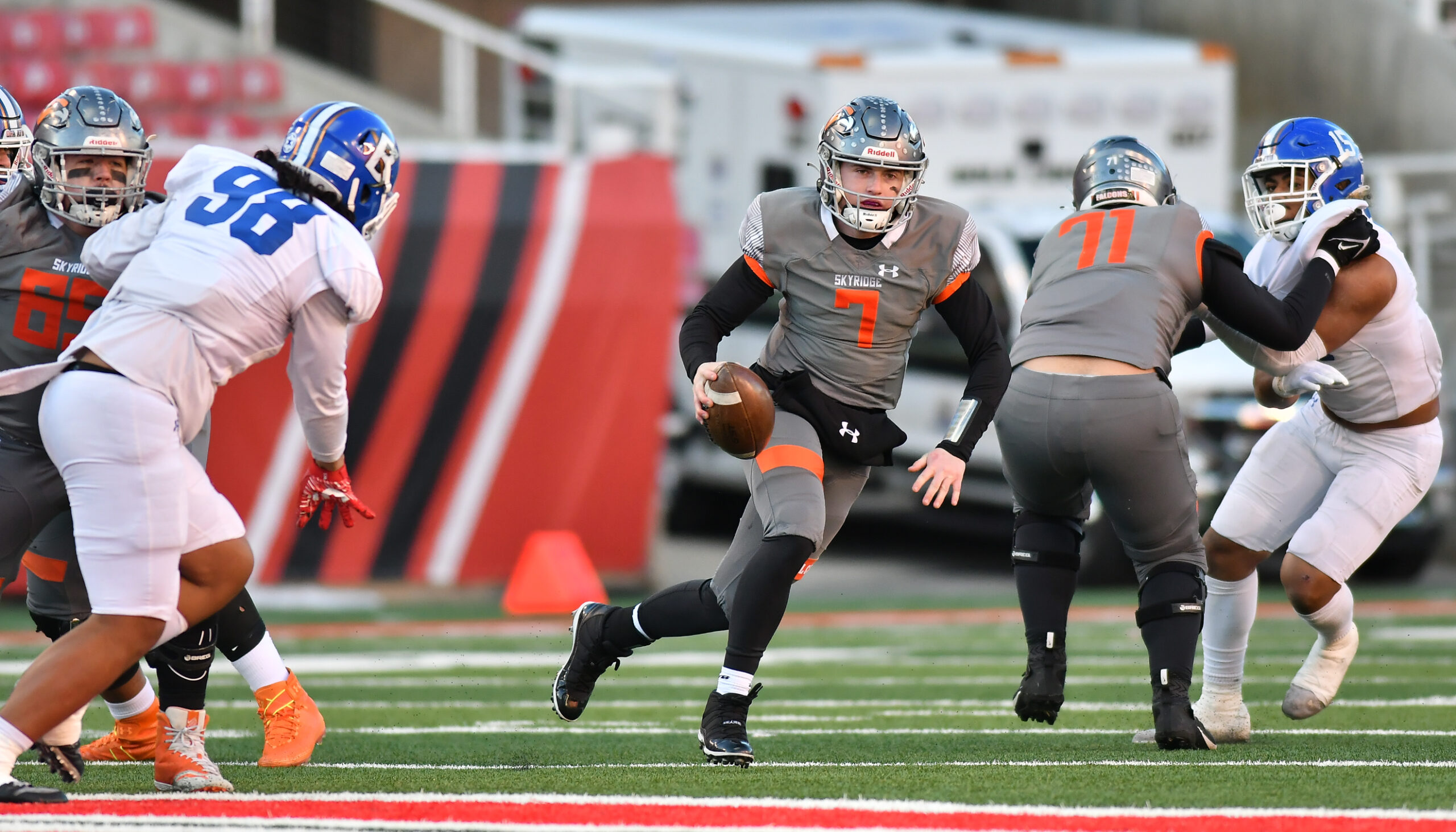 Numbers don’t lie, but sometimes they don’t tell the whole story either.

In Thursday (Nov. 10) afternoon’s semifinal between #2 Skyridge (12-1) and #3 Bingham (10-3), the Miners gained more yards, completed more passes, had seven more first downs and possessed the ball 69 percent of the time. Sounds like a formula for solid success.

However, the Skyridge football team was so efficient offensively and so relentless defensively that they ran away with a 45-20 victory on the way to a berth in the 6A state championship against #1 Corner Canyon (11-2) on Friday (Nov. 18) at 11 a.m.

The tone for the evening was set during the very first possession. Bingham got the ball and used the trademark punishing ground game to move methodically down the field while taking more than eight minutes off the clock.

Facing 3rd-and-9 at the Falcon 17-yard line, the Miners were in an obvious passing situation. Their quarterback threw into double coverage and the ball ended up in the hands of senior defensive back Smith Snowden, who sprinted down the left sideline for 95 yards and a touchdown.

Senior kicker Ian Keeslar put the point-after attempt through the uprights and Skyridge had a lead the team would never relinquish.

Bingham didn’t go as far on the next possession and punted the ball back to the Falcons for their first offensive possession of the contest early in the second quarter.

They used a combination of runs and passes to reach the Miner 1-yard-line, and senior running back Tate Walker took it across for the first of his three rushing touchdowns of the afternoon to make it 14-0 with 8:57 to go to the break.

The next Bingham turn failed to do anything but run time off the clock and Skyridge took over on the 46-yard line.

After a first down to the Miner 45, senior quarterback McCae Hillstead connected a short pass to junior La’akea Kalama and he did the rest, breaking four tackles on his way to the endzone. The Falcons now owned a 21-0 advantage with 3:43 left in the period.

Some untimely penalties aided Bingham’s next drive and the Miners finally bulled across the line to board a score after time expired to make it 7-21.

Skyridge got the ball to start the second half. The subsequent drive was keyed by a big catch from senior wide receiver Jackson Andrus and finished by a 46-yard toss from Hillstead to senior Jace Doman to extend the lead again to 28-7 at the 9:56 mark of the third quarter.

Bingham responded in less than a minute with a long passing touchdown to narrow the margin to two scores, but that was as close as it got. Walker added one more short rushing touchdown each in the third and the fourth.

The Miners managed to score again early in the final stanza after another lengthy drive, but their last three possessions ended in interceptions by senior defensive backs Dalton Young andSaxon Higbee and a turnover on downs.

Keeslar capped the tally by kicking a 29-yard field goal with 2:01 remaining. Walker had 13 carries for 75 yards plus one catch. Hillstead finished 12-of-18 (67%) for 210 yards with two touchdowns and one interception. Kalama had five receptions for 90 yards and Doman had two catches for 68 yards.

The Falcon defense brought heavy pressure throughout the contest. Young finished with 12 combined tackles including five solo and also forced a fumble in addition to his pick.

Senior linebacker Mason Anderson registered 11 tackles while Higbee finished with 10 and senior linebacker Sione Westovermade nine. Sophomore defensive lineman Iakopo Malufau had a sack and 3.5 tackles for a loss among his seven combined.