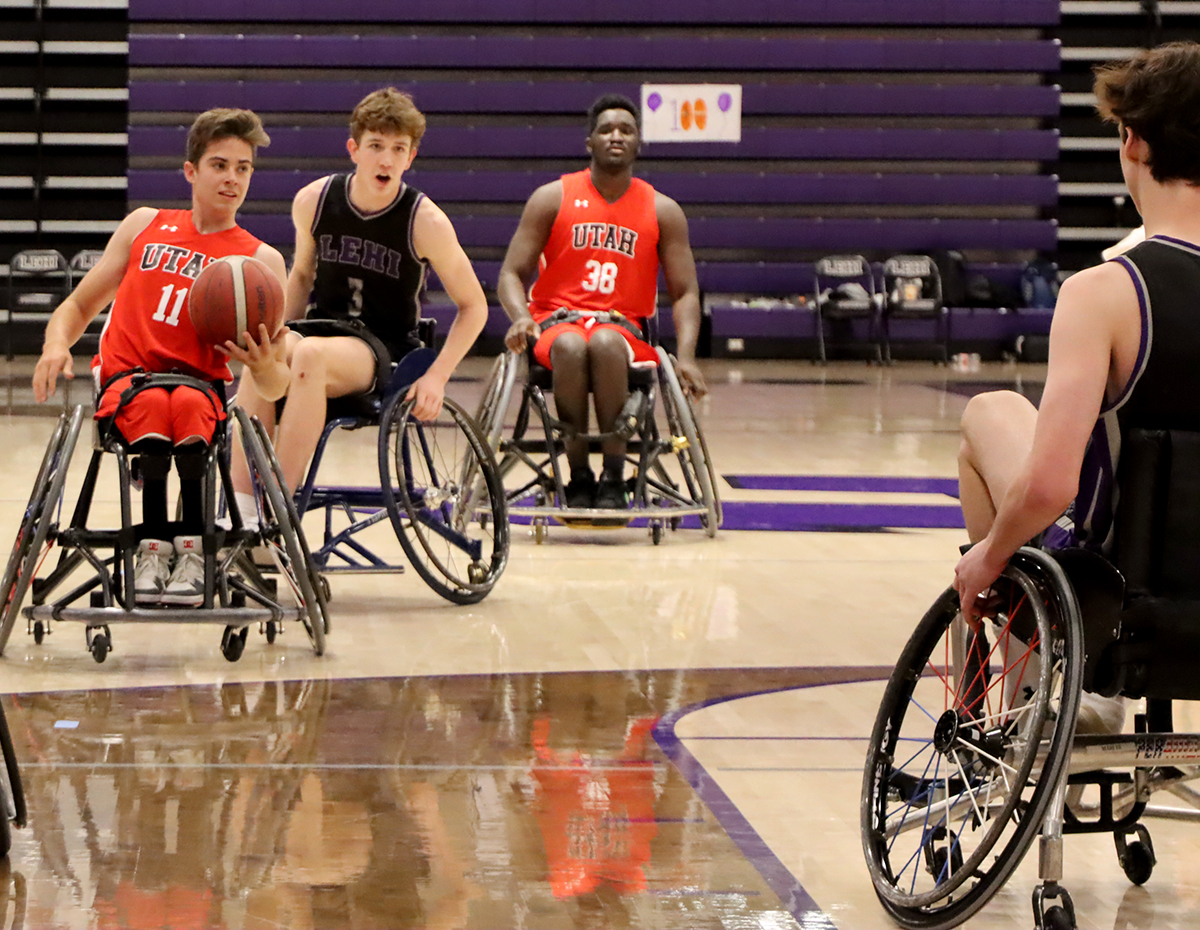 The Lehi High School community gave some great support to a fundraiser for the Utah Rush, a traveling wheelchair basketball team, on Thursday (Nov. 3) in the Field House.

The event raised about $3,900 to help team members pay their travel expenses, which Rush Coach Adam Lindsay said total about $40,000 per season. The team participates in multiple fundraisers to get these costs covered.

The Lehi event included a full-length game. The funds were generated from ticket and concession sales, an auction of donated items and paying for points during the contest. Lehi announcing legend Johnny Revill volunteered his time to call the game and also conducted the auction.

The team draws players from throughout Utah and has one member from Idaho. There is also one girl on the squad, and it includes participants from grades 9-12.

Lindsay explained in his introduction prior to the start of the game that the main purpose of the program is to teach life skills, but the players may also earn potential college options as there are a couple dozen schools which field wheelchair teams.

There was a good turnout for the event and the coach also expressed his appreciation for the support. “It’s amazing what these kids can do in chairs,” he said. “You may be surprised.”

The opposing team for the evening included members of last year’s varsity basketball program including one of the managers, along with a special guest appearance by Pioneer Pete, the school mascot. The specially-designed competition wheelchairs they used were provided by the Rush.

The highly entertaining game was dominated by the Rush, who raced out to a 16-2 lead in the first quarter and never looked back. They were up 26-6 at halftime, but after the break spectators were allowed to purchase points for the team they favored.

The final “score” thus ended up in the hundreds for each side. Despite being bought back to an even game twice, the local players still couldn’t keep up and the Rush won handily any way you look at it.

The event was organized by the LHS Key Club, a student service and leadership organization. Lehi senior Kate Killpack’s younger brother Davey is on the team.

“We were trying to come up with a worthwhile project as a group, and Kate mentioned this team’s situation to us,” said Pam Gordon, faculty advisor to the club. “We all got excited about it and things just grew from there.

“Coach (Quincy) Lewis and Johnny were great to help us out,” she added. “Everyone here donated their time and all proceeds from the evening will be going to the Rush.”

Senior Tanner Cook thought it was fun to participate as a player, even though he didn’t think much of his team’s performance.

“It’s a lot harder to move and we’re just not as quick in chairs,” he said. “We all were excited to be a part of this and it helped us have a little more appreciation for the small things we take for granted.”

Junior Cooper Lewis also enjoyed the experience. “It was fun to be with these guys and to host it here,” he said. “It was my first time to sit in a wheelchair and it was hard just to do that besides playing in it. I had to get used to it but it was still fun and those guys are amazing.”

Lewis said when Gordon approached him, it was easy to agree for such a good cause. “Both sets of kids were playing the game they love,” he said. “We weren’t much competition for them, but you can tell they’re a competitive group. I’m glad we can help support their season.”

In the one practice the local players had in chairs prior to the event, Lewis told them to have fun but to respect the opponents as well.

“It’s amazing what these kids can do in a wheelchair,” the coach said. “Their speed and how they can maneuver was truly impressive. It’s a different game than what we’re all used to but it’s fascinating to watch. There are some really good players on that team, and it was great to have them here.”