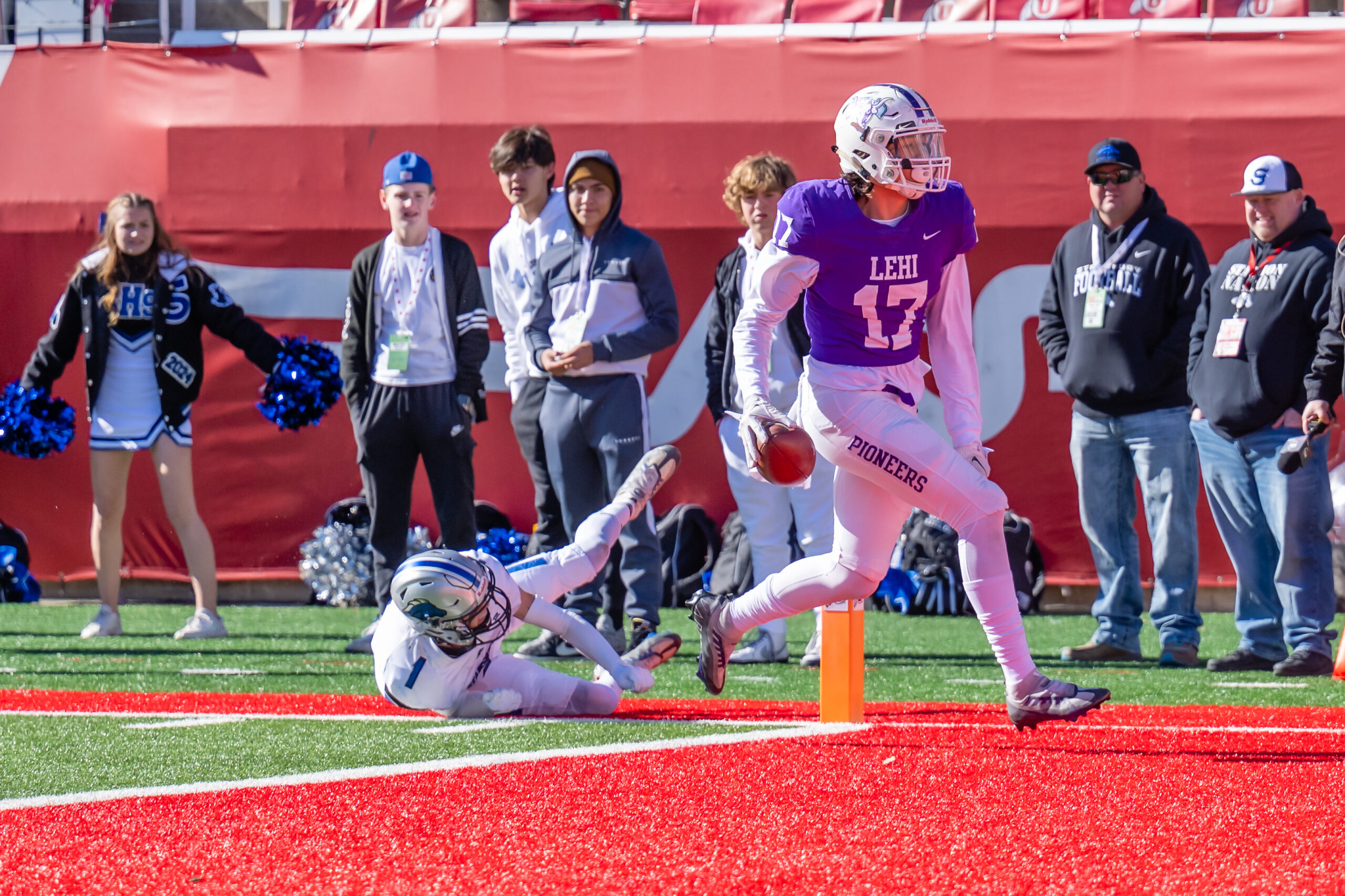 The top-ranked Lehi football team looked like the returning state champion that it is on Friday (Nov. 11) as the Pioneers earned their school-record seventh shutout of the season over previously-undefeated #4 Stansbury (12-1) with a dominating 42-0 performance.

They boarded 35 points in the first half with the help of their very effective defense, which had struggled a bit in last week’s quarterfinal. The Lehi offense started hot as well and kept the Stallions off balance by using its full range of weapons.

The lopsided score meant the teams played with a running clock the entire second half, a rarity at this point in the season.

Things started going south for Stansbury on the very first play of the game. The Stallion quarterback threw into double coverage and senior defensive back Kadiyon Sweat came down with the ball at the Lehi 48.

However, Stansbury was able to hold the Pioneers to a single series and got the ball back deep in their won territory. The Stallions weren’t able to gain a single yard though and Lehi got possession after the punt near midfield.

Senior wide receiver Fernando Ruelas made a catch for the initial first down. Then senior quarterback Jackson Brousseaufound senior running back Carson Gonzalez for a 23-yard gain to reach the Stansbury 18.

Gonzalez finished the drive from there with a touchdown on the ground and senior kicker Nate Shepherd added the PAT to give Lehi all the lead they would need at 7-0 with 8:02 remaining in the initial quarter.

Of course, no one knew that at the time. The Stallions were able to pick up a couple of first downs during their next possession, but it ended the same way the first one had, with the ball in the arms of Sweat after he made another interception.

Senior tight end Makafefie Havea got the drive’s initial first down with a reception. Gonzalez busted a big run behind a block from senior offensive lineman Ben Jeppesen and followed that up with another one at the 25-yard line.

Freshman running back Devaughn Eka carried the ball to the 2 and Sweat finished the drive by taking a direct snap in the Wildcat formation and crossing the line for the score to make it 14-0 at the 3:05 mark.

Stansbury was moving the ball again during the third possession when a bad snap made it sail away from the quarterback and it was covered by senior linebacker Hema Katoa at the Stallion 48.

Another short field and another quick drive. Junior wide receiver Jace John picked up some good yardage with a couple of catches and Havea finished the push with a 25-yard receiving score to increase the advantage to 21-0 eight seconds into the second period.

The teams traded the ball several times after that. During the next successful drive, Havea, Gonzalez and Eka all made some chunk plays to reach the 3-yard line and Brousseau hit Gonzalez with the short pass to widen the gap to 28-0 with 3:52 left in the half.

After another pair of fruitless exchanges, the Stallions had possession and were hoping to get some points on the board before the break, but the quarterback dropped the ball and senior defensive end Camden Williamson covered it at the 9-yard line.

From there Havea gathered in a nice toss to the corner of the endzone and the Pioneers carried a 35-0 margin into the locker room.

The rest of the game went very quickly with the running clock. Lehi added one more touchdown early in the fourth quarter on a 2-yard pass from Brousseau to sophomore wide receiver Mays Madsen to complete the tally for the afternoon. The defense never let up to preserve the shutout.

Brousseau finished with 17-of-29 passes for 225 yards and four touchdowns. Gonzalez had 14 carries for 100 yards and had three catches for 56 yards with one score each way. Havea made five receptions for 69 yards and two touchdowns.

“After the Box Elder game, we had to make sure the kids were focused on what we needed to do today,” said Coach Ed Larson. “We had them compete hard in practice and we evaluated a lot of film. The defense was exceptional, but I thought we were good in all three phases today.”

The Pioneers (13-0) now have the opportunity to not only win the 5A championship but also to tie the state record by completing a perfect season next week. They will take on #2 Timpview (10-2) for the title on Friday (Nov. 18) at 2:30 p.m.