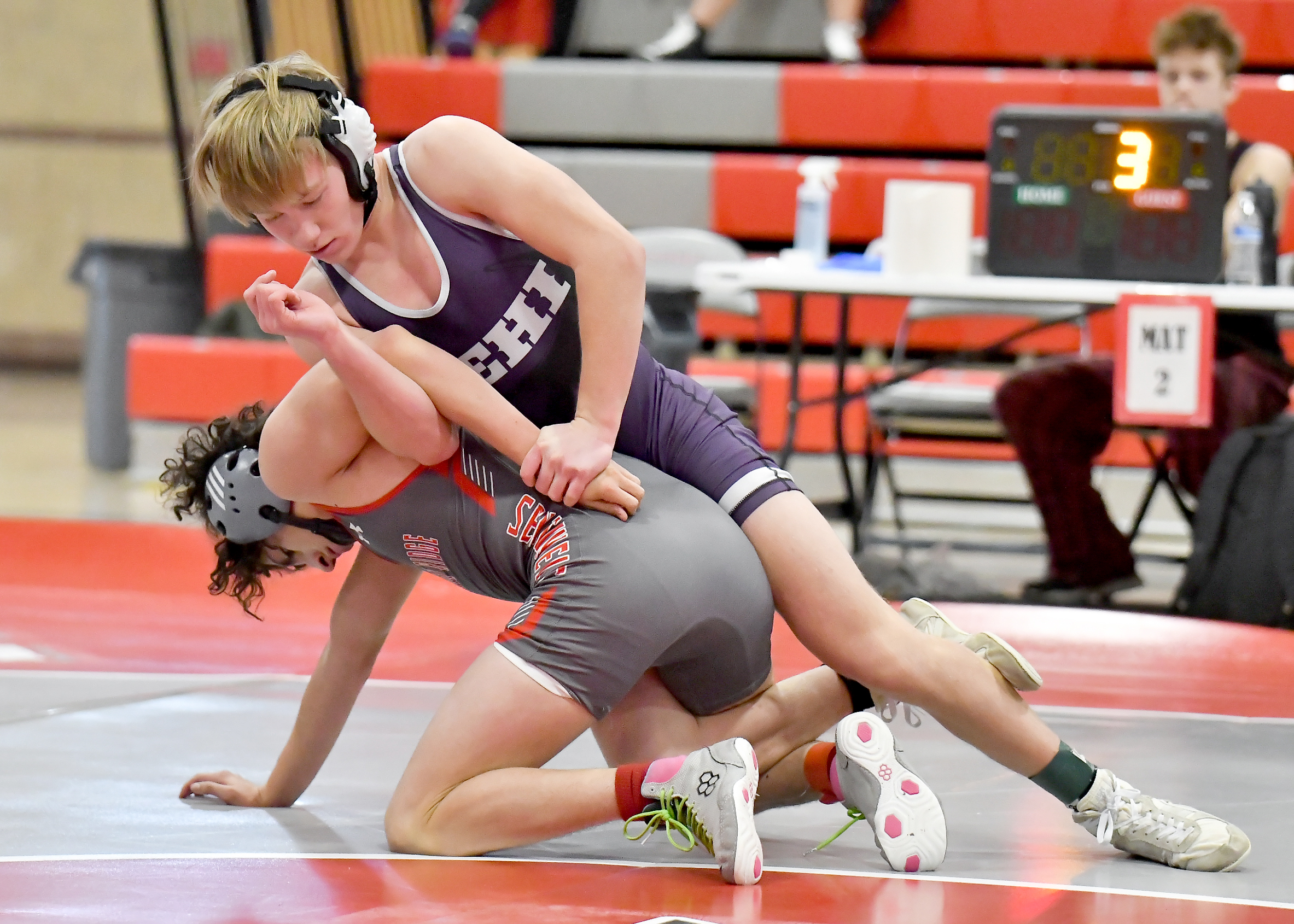 The Lehi boys wrestling team finished second out of 12 teams and captured four gold medals at the Mountain Ridge Battle Royale on Dec. 28.  The Pioneers placed in every weight class but one and had multiple placers in the top two brackets.

Heavyweight Isaac Terrell kept his undefeated record intact after a call was reversed in the title match. “Terrell was taken to his back and pinned with an illegal head throw,” said Lehi Coach Dan Rice. “I argued the call and asked for verification from the site officials.”

As a result of the review, the points awarded for the takedown, near fall and pin were waived and the match was restarted from when the takedown occurred. Terrell then pinned his Pleasant Grove opponent at 3:31 to contribute 28 points to the team totaland wrap up first place.

In the 215 weight class, Cole Eldredge had to defeat two of his Pioneer teammates to win the bracket title and tally 20 points.

At 190, William McCleary ran his total to 26 points as he defeated Millard’s KC Whitaker by 5-1 decision to claim the gold medal for his bracket.

Ammon Cannon secured the championship in the 150 weight class with 26 points as he pinned Isaac Leech of Bryce Valley at 3:46.

Here are the results for Lehi’s other entrants:

In the 113 bracket, Kenneth Fink scored 15.5 points and finished third after a thrilling sudden-victory win in extra time over Pleasant Grove’s Quincy Benson.

At 120, Lincoln Rex defeated Vincent Sanchez of Mountain Ridge by 6-1 decision to earn third place and add 17 points to the team total.

At 126, Gunnar Richins lost both of his contested matches to Viking and Sentinel opponents.

In the 132 weight class, Jeffrey Sargent pinned Tayven Henrichsen of Mountain Ridge at 1:43 to finish in fifth place with 11 team points.

At 138, Beck Olson placed sixth and scored 13 team points. He was pinned by Pleasant Grove’s Bo Goodman in the placement match.

In the 157 bracket, Mason Fink got 10 points on the way to fifth place. He won his last bout by fall over Tooele’s Jacob Proctor at 1:46.

At 165, Ryan Cannon finished eighth with one point after being pinned by Lucas Talbot of Copper Hills in his placement match.

At 175, Hayden Johnson scored four points and came in seventh after winning his final match by fall over Syth Castaneda of Tooele in 46 seconds.

The Pioneers captured three of the top four spots in the 215weight class. Daniel Hoyal fell to Eldredge by 6-1 decision in the championship bout to finish second with 20 team points.

Eldredge topped teammate Parker Elswood in their quarterfinal but Elswood won his next two matches before finishing fourth with 12 points. Murray’s Athanasios Johnson won the placement match by major decision 11-2.

“We had a pretty good tournament,” Rice said. “The kids all competed well.”