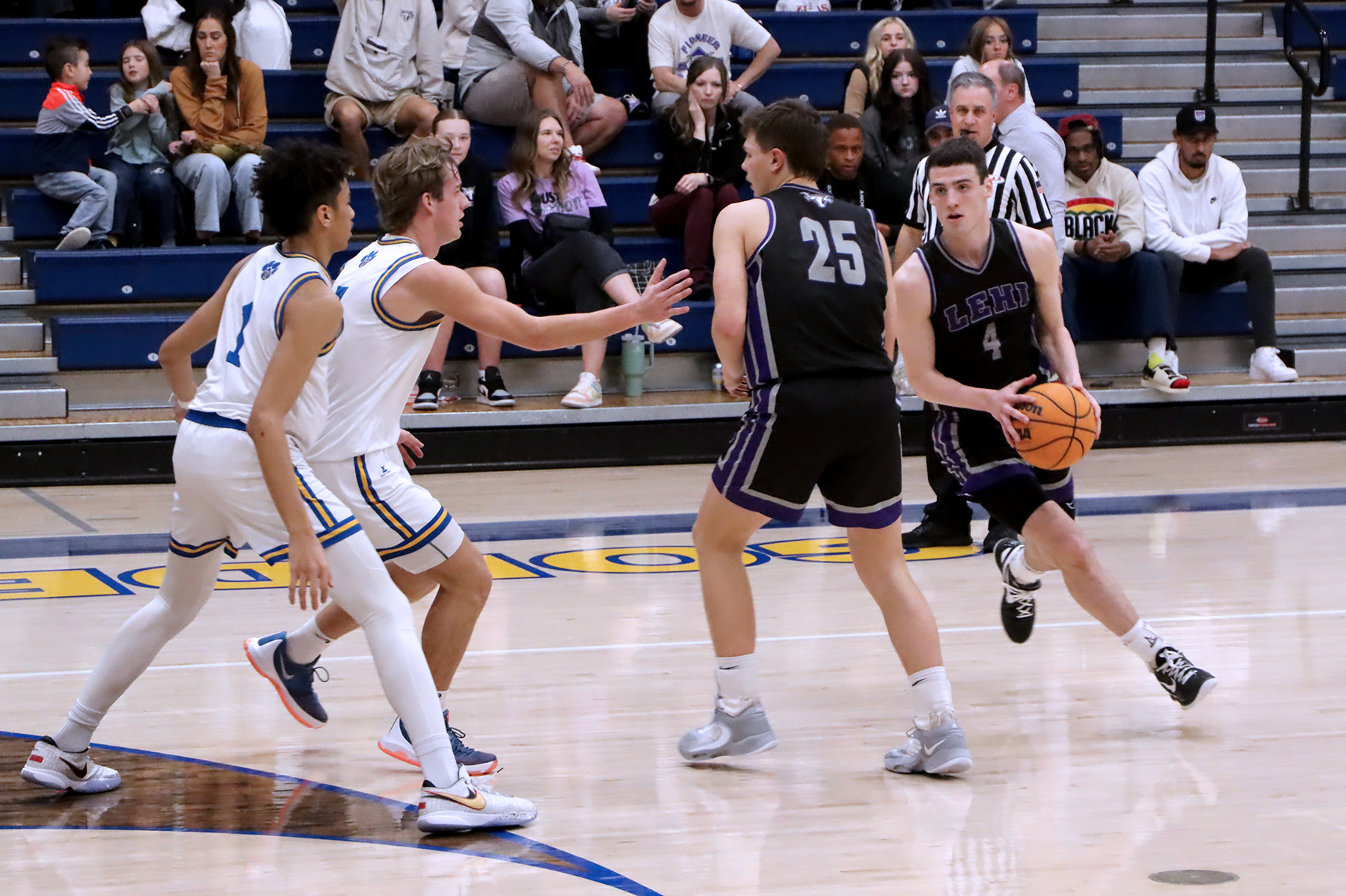 The Pioneers had won eight straight games prior to that loss. At 3-1 in league play they are second only to the Hawks and have a 10-5 overall record.

This Tuesday is Junior Pioneers night. See the details at the end of this article.

In a lively road game, the Pioneers got 10 points including a pair of triples from junior guard Cooper Lewis in the opening quarter to help them to a 13-12 lead after a deuce from senior forward Preston Varner finished it off.

He continued to take advantage of defensive attention on Lewis as he scored seven straight points early in the second to help spark a 17-6 run for his team in the period. Lehi enjoyed a 30-18 advantage heading to the locker room.

After playing essentially even during the third, the Tigers managed to cut the margin to just seven with under four minutes left on the clock. Senior guard Braxton Hawkins found Lewis open beyond the arc and he sank a long shot with 2:25 to play to extend the lead again.

In the final two minutes, Lewis and junior forward Grayson Brousseau went a combined 6-of-6 from the line to close out the big win for the visitors.

The Pioneers shot 46 percent from the field for the contest, including 43 percent from long range. They also had 16 assists on 21 field goals.

“That’s a good young team,” said Coach Quincy Lewis. “When it got close there at the end, it was our experience that allowed us to win the game. This is a tight-knit group and a good, solid defensive group.

“We got off to a slow start offensively, but Cooper floated the boat until we got going,” he continued. “Defensively we played well from the get-go and that helped make the difference.”

The No. 1 Hawks got off to a hot start on their home floor, rolling to a 10-2 margin in the first four minutes of the contest.

The Pioneers responded with triples on three straight possessions from Braxton Hawkins, sophomore forward Easton Hawkins and Varner and took the lead by the end of the period after a pair of free throws from Cooper Lewis.

Lehi held Alta scoreless in the second quarter until two made charity shots at the 3:32 mark. The Pioneers had a 31-26 edge at the break.

The Hawks worked their way to a tie at the 4:30 point in the third and it was back-and-forth from that point on. Lehi took a 46-42 advantage into the final stanza and stayed in front until the final four minutes, when Alta overtook the Pioneers and held them off for the win.

Despite the opponent’s advantage in height and length, Brousseau worked hard to convert half of his tries from the field and all of his free throws to finish with 16 points and five rebounds.

“We led most of the way, but we just didn’t execute in the last four minutes,” said Coach Lewis. “Easton gave us a great lift off the bench. We’ve been waiting for that because we know he’s capable.

“Overall, our defensive effort was good,” the coach added. “These guys have been putting up 80-100 points a night lately.” The Hawks averaged 84 points in the last four games prior to this one and boarded 100 in one of them. “Now we just need to focus on getting ready to play Mountain View,” he said.

The Tuesday (Jan. 17) game will also be Junior Pioneer night.Youth who wear their bantam jerseys or Lehi basketball camp shirts will get two free admissions to the boys game. There will be an opportunity to meet the varsity players and get autographs after the game.

“We look forward to having future Pioneers in our gym and having a great community night,” Coach Lewis concluded.