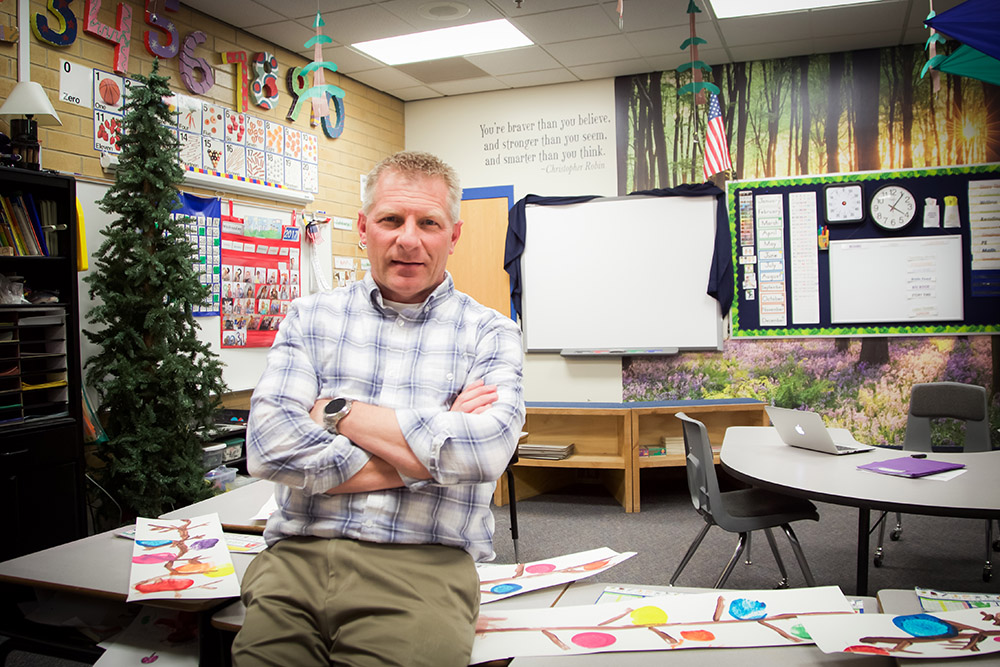 John Jay Harris is figuratively and literally a pioneer. He graduated from Lehi High School in 1983 and continued his pioneer heritage as a family member who created and worked at Purple Pig Pizza, the original pizza parlor in Lehi. His lifetime dream was to complete his business degree and open his own pizza parlor.

John Jay is the son of Annette and Jerry Harris, who had ten children–five girls and five boys. They were a fun loving, resourceful, smart, and hard-working group. John Jay was remembered in high school as a great musician and happy young man. He was in a band called “Loose Gravel” with several other classmates. He served a mission for The Church of Jesus Christ of Latter-day Saints, and upon returning home enrolled at the University of Utah as a business major.

To help with school expenses he was hired as a para-professional in a special education classroom. For several years he observed, learned, and fell in love with the teaching profession. All dreams of owning a pizza parlor where scrapped and he went back to school to get his endorsement to teach special education.

As a teacher at Eaglecrest Elementary in Lehi, Harris has been a pioneer in innovative approaches to teaching children with autism. He says, “Autism is not an excuse. I want students to leave my class knowing that they can succeed.” He uses the same curriculum as other teachers and adapts the curriculum to the skill level of his students.  He adds, “The class has to be fun and quick paced.”

Music has always been important to Harris and he uses his musical gift to inspire, encourage, and entertain his students—always with an educational goal. The alphabet and numbers are taught using music. “With my first- graders we sing as many as twenty- five songs a day. At the end of each month, we invite parents to come to class and sing with us.” Every week Harris teaches the entire first grade using music. “I would love to be a music specialist someday.”

John Jay Harris in his classroom surrounded by engaged students.

Harris teaches first, second and third graders. He collaborates with the main stream teachers to make sure curriculum he teaches is consistent with the regular curriculum. Each student’s program is individualized for his/her skill level. “We don’t believe in the traditional reward-consequence for skill building. We don’t punish students for doing what they are not skilled in doing. I have never had a student in my nearly thirty years of teaching that couldn’t learn.”

He attempts to main stream his students as much as possible.  His students participate in mainstream P.E., art, and computers. He often observes his kids interacting with students in regular classes. On one occasion a student shared a treat with one of his students. “It melted my heart,” said Harris.

“Technology has been a great tool in teaching my kids. When the room is dark the students are focused on the white board,” adds Harris. He emails parents each week reporting on their child’s progress and always includes a picture he has taken during the week.

Harris’ classroom is decorated like a forest glen. There are pine trees and outdoor scenes displayed in and around the large semi-circular table. There are also charts and graphs on the walls displaying the student’s progress. There is a calm and serene atmosphere in the room. Obscurely displayed in a corner is a shelf of awards Harris has received over the years.

Two years ago, Harris received the prestigious “Huntsman Award for Excellence in Education.” He was named outstanding special education teacher in the state. It was the first year this award was given to a special education teacher. Among his accolades are two “Teacher Feature” awards given by KSL Radio. He has also been awarded the Golden Apple Award by Alpine School District and the “Rising Above the Rest” Award

Following are excerpts from parents, and colleagues who were given an opportunity to describe Harris’ work.

“My story is simple. I’ve never seen a teacher that is so dedicated and willing to use their personal time for the benefit of students. More than once Harris has personally delivered an object my son has left at school to our house, knowing he’d struggle without it. He’s kept us in the loop of what’s happening in his classroom with pictures and regular personal email updates. Our son loves going to school finally and it is because of his buddy ‘Harris.’ Not only is he a friend, but he’s doing incredible things to help our son develop his skills. He knows all his favorite books and knows just how to help him be successful. We are so grateful for what he’s done for our child.”

“I have worked with John Jay for 6 years now. This guy IS amazing and I am happy you want to do this. I see behind the scenes all the extra time, money and love he puts in EXTRA for these kids and it is…amazing. He is kind of still a kid himself so I think he does understand these guys, (and gals,) a bit better than the rest of us. Here are just some things I have seen.

Just this year we had a student that was stranded with car problems with his mom and grandmother in St. George. This student ended up missing about 2 weeks of school. Mr. Harris kept in contact with the family and offered, more than once to go down and get the student so that he would be in school. Mr. Harris was so sad that this student missed Halloween. He absolutely would have gone to St. George and brought the family back on his own time and dime just so that student would not have missed out Halloween activities.

This is just a partial list of comments made by those who love and appreciate the work, love, and dedication of John Jay Harris.

Harris’ wife, Kinna, and his four children, Sydney, Kyle, Gavin and Connor support Harris in his passion. In addition to teaching, he is a co-director of the summer Clear Creek program with colleague, Brad Greenwood, and plays drums in the popular Shane Lee Band. Maybe his dream of owning Purple Pig Pizza can become a reality, but for now hundreds of students are happy  and successful having been a student of Mr. Harris.