Billion-dollar I-15 bond result of years of effort 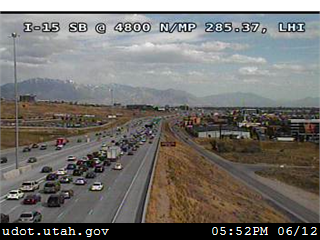 For regular observers of the Utah legislature, the quick passage of a billion-dollar I-15 construction bond this past session might have seemed surprising. Bonds don’t pass easily in Utah, due in large part to a state constitutional provision which limits the amount of debt the state can legally incur. But this one glided through the Senate and House in just five days. How did it happen?

The answer was at least three years in the making, involving elected officials at the state and local levels, UDOT officials, and business leaders, including a key group from Lehi that came together to organize a successful public information campaign.

After completion of I-15 construction projects in Utah County and Salt Lake County about four years ago, congestion on either side of the “Technology Corridor” began to increase rapidly with population and business growth.  The Technology Corridor, often called “the bottleneck” by Lehi residents, is the 4.5 mile stretch of I-15 between Thanksgiving Point and Lehi Main Street.

While the legislature had approved a bond in 2008 for expansion of the freeway through Utah County, the Technology Corridor was not included because of its cost. At $450 million – due to a design including two additional lanes plus a frontage road each way, and 13 bridges – the project was set to be started in 2020 after bonding was freed up.

One person who took notice of the increasing congestion was Nathan Ricks, managing partner at Stack Real Estate and a major developer of the Thanksgiving Point area. He began discussing concerns and exploring solution for the situation with state legislators and others in the business community.

One of those was Mark Welcker, CEO of the Lehi Chamber of Commerce. Welcker said that as businesses consider locating to the area, they will often call him for information about the area. They inevitably ask about the roads and traffic as part of overall quality of life considerations for their employees.

Ricks and Welcker could see indications that despite the attractiveness of the burgeoning Silicon Slopes area, the freeway congestion would soon be affecting businesses’ decisions about locating here. So they reached out to state legislators.

Like anyone who lives in Lehi, state legislators didn’t need convincing that I-15 traffic was becoming a real problem and something needed to be done. State Representative Kay Christofferson and Senator Jake Anderegg, who at the time was serving as a state representative, helped organize a meeting in late 2015 between business leaders and Governor Herbert, who was supportive of their efforts. Al Jackson, who was serving as a senator from Highland, and David Lifferth, was serving as a representative from Saratoga Springs and Eagle Mountain, also helped with the effort.

As the 2016 legislative session approached, Rep. Christofferson got to work on a presentation with Craig Peterson, a former Senate majority leader and current lobbyist for transportation interests. They delivered the presentation to the Infrastructure and General Government Appropriations Committee at the start of the session.

Also at the start of 2016, a second meeting was held with the Governor, state legislators, local government leaders including Lehi mayor Bert Wilson, and business leaders. Understanding of the issue was growing, along with the will to address it.

In the Fall of 2016, the Lehi Chamber’s recently-formed Executive Roundtable came together and agreed to put their collective efforts into getting a bond passed. Kent Loosle, CEO of Mountain Point Medical Center, heads the roundtable group. He said there was a lot of enthusiasm for this project.

The group produced two key public awareness tools. The first was a project headed by Andrew Bybee, owner of Stack Real Estate, who created a website called flippintraffic.com and hired 97th Floor to produce a humorous video, also called Flippin’ Traffic. “We wanted to highlight solutions, not complain,” said Bybee. “We said, ‘Here’s a problem the state has and here’s a way the state can fix it.”

Added to the video was a letter signed by 46 business and government leaders. The letter was sent to legislators at the start of the 2017 session in January, and again just before introduction of the bill at the end of the session. Chamber CEO Welcker said these two things helped make it clear to legislators that the proposed project was important and had widespread support.

As the session began, there was plenty of support for the bond, but it wasn’t clear whether the resources were available. “Going into the session, I thought it would be a 50-50 chance of passing it,” said Rep. Christofferson.

Senator Wayne Harper, Chair of the Senate Infrastructure and Appropriations Committee, was a supportive participant in the ongoing discussion, but he said it wasn’t clear that the state could afford the bond until the session was nearly over. “In order to move anything up we knew we were going to have to pass a bond,” he said. “We still had other projects in the works and we needed time to finish those.”

Legislative leaders asked UDOT to look at things, and UDOT found that projects were finishing up a little early, cash flow was good and the construction community said things looked doable on their part. Robert Westover, I-15 Technology Corridor Project Director for UDOT, said the bulk of the work that needed to be done in order to move ahead had been taken care of. “They know there’s work that needs to be done ahead on a big project,” he said, explaining that they had taken care of basic design plans and the required environmental study.

Senator Harper said he was approached on Tuesday, February 28 by Senator Ralph Okerlund and Senator Stuart Adams, Senate Majority Leader and Whip, respectively. They indicated that they thought everything was in place to move forward. The next day, the decision was made to move forward. “And by the way,” they told Senator Harper, “You’re going to run the bill.”

House Majority Whip Representative Francis Gibson sponsored the bill in the House. All of Lehi’s representatives, Senator Anderegg, Rep. Christofferson and Representative Cory Maloy, were active advocates throughout the session. Gibson pointed out that the bond covers several needed projects around the state in addition to the Tech Corridor, which will claim the bulk of the funds at $450 million.

The $1 billion in bonds will be issued over the course of four years in equal increments of $250 million per year. Senator Anderegg noted that the bond is net neutral, which was a main goal of Senate leadership. Rep. Christofferson said there was general agreement that the cost of bonding was balanced by “the cost of inflation and the cost of sitting in traffic.”

The project is expected to begin in early 2018, with three to four years of construction until completion.

Elected officials and business leaders alike expression satisfaction with the success of the collaborative efforts. “It was nice to work on something that everybody was excited about,” Senator Harper said.

“A lot of energy has come out of this and we hope that we can find other projects to get behind,” said Chamber CEO Welcker. “When you get a great story with a common goal, great things can happen.”