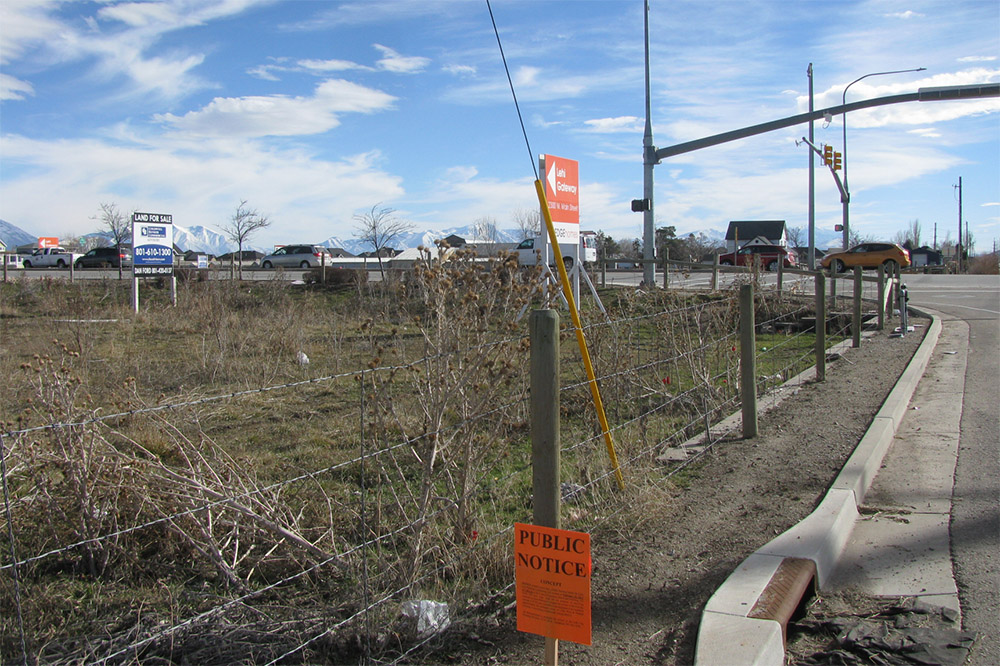 On July 27, Lehi City Planning Commission met in city council chambers to deliberate on 17 agenda items. The chambers were packed to overflowing as all seven commissioners and city planning staff discussed several controversial developments. The five hour meeting was adjourned at 12:16 AM.

The first agenda item was consideration of Dave Robinson’s request for condition use approval for the Five, Inc. site plan, a 10.525-acre commercial development located at approximately 1100 West Pioneer Crossing in a commercial zone. This item had been tabled from the July 13, 2017 meeting pending a traffic study evaluation.

According to city planners the traffic reports said traffic in and around the development would not be impacted, but Commissioner Ash, a traffic engineer, had questions about the study. Citizens who opposed the project claimed the increase in traffic would be dangerous for the numbers of young children in the area.

Neighborhood resident, John Nicholes, said he had spent several hours talking to residents to see what measures could be taken to mitigate the traffic safety hazards. Commissioner Peterson recognized that there had been much public input on the development. Commissioner Hutchings responded, “Anything that is proposed will have issues. The zoning is incompatible with the neighborhood.”  Commissioner Nielsen added, “I agree with Janys (Hutchings), this project does not impose an unreasonable risk more than the norm.” Ash added, “Lehi code is vague when it comes to traffic. Local streets to provide access to a business is unreasonable. I have sympathy for the developer. Traffic could become a greater issue than is addressed in the traffic study. Our hands are somewhat tied by zoning.”

Hutchings moved to approve the development with conditions to work with staff on design standards, crash gate installation, and providing access for fire department and safety measures for children. She acknowledged that the zone is a burden to the neighborhood, but zoning allows this type of development. It passed with four ayes and three nays.

The next agenda item was consideration of Fieldstone Utah Investors request for a revised layout of Northridge preliminary subdivision, an 80-lot residential development located off Fox Canyon Road in a Planned Community Zone. This item was also tabled from the June 8 Planning Commission meeting. The development proposed has a variety of lot sizes from 4400 to 12,000 square foot lots. The revised plan needed to provide 150 feet of frontage per home. The homes will front the four-lane collector road. There were also water issues that needed to be resolved. The developer had not obtained the needed water. Staff member, Ross Dinsdale, pointed out that the Murdock Canal can be pumped to provide water with additional booster pumps to increase capacity and the culinary water can be piped from the Hardman development west of town. “We can also drill wells. We are continuing to try to find a solution to the water problem,” said Dinsdale.

Dillon Young, representative for Fieldstone Homes, expressed, “Water problems are always a concern. The city staff can reign in the project if water is not available. Grading is in progress and lots should be available by next spring.”

Hutchings expressed concern that the lot sizes need to be bigger. With the trail involved in the project there were questions about who would be responsible for the trail and if it would possibly be the Home Owners Association’s responsibility.

Commissioner Ash said, “There are traffic problems with this development. Industry standards require 155 foot stopping distance on a flat grade. These homes are on a 6% grade. The proposed 18-foot driveways backing onto a four-lane collector road is dangerous. I disagree with the traffic study.” Commissioners Seegmiller, and Peterson also found issues with the proposal. “We met the standards of the city for a collector road,” stated Dinsdale.

Commissioner Ash made a motion to deny the project finding that the traffic study is flawed, slopes are an issue, and city code is not in compliance with industry standards. The motion passed 5 to 2. The project was denied.

Item 2-5 was another project that brought many residents to the meeting. This was a public hearing for Jennifer Gordon’s request for R-1-Flex (residential) zoning on the Sunset Meadows annexation of approximately 5.12 acres of property located at approximately 700 South Center Street.

The project brought an emotional plea from the Willes Family who own a mink farm adjacent to the project. “If this development is approved, it will be the final nail in my coffin,” Willes expressed.  “I’ve operated this farm for thirty years. I challenge this group to stand behind what you have said before. I will quote from the ‘Lehi Right to Farm policy.’”

Commissioner Hemmert responded, “You have no better friends than us on this committee. We want to protect you.”

Mike Willes expressed concern about water. “We have over-pumped the aquifer. Our wells are going dry.”

Wendy McBride added, “I have lived across the street from the proposed development for many years. Cars go 45 miles an hour on that street. I can’t back out of my driveway. Traffic is unbelievable. Fifteen homes on this piece of property is unbelievable. Let’s have a little piece of Lehi left.”

Judy Tripp also expressed concern about water. “I used to have good water pressure now a have minimal pressure,” she said.

Hutchings moved to recommend approval of zone change and annexation from VLDR to LDR Flex Zone with conditions to protect the mink farm and to combine lots 12 – 15. She also recommended using the “Lehi Right to Farm” policy as guidance for preservation of the Willes mink operation. There was some discussion about the legality of requiring the combining of lots when zoning approved it. It passed with one nay and six yays.

Item 2-7 and 2-8 also drew anger from residents in the area. This project was a public hearing and recommendation of Gold Stream Partners request for a zone change on 3.15 acres of property located at 708 West Main Street changing the zoning from A-1(agriculture) to R-2 (medium density residential). The Gold Stream Partners also presented the concept plan, an 18-unit residential development with an R-2 zoning. This zoning allows for duplexes.

Residents near the development came en masse to protest. Blake Beck asked, “Why R-2? All the surrounding development is R-1-8. We know we can’t stop the development but why this zoning? Multiple family dwellings de-value the properties around them.”

James Klein expressed concern of lot sizes. “There is no green space, problematic traffic, no parks. It is poorly planned. This is dangerous for families with a busy road in front and a creek to the side.”

The applicant had a revised plan, but did not have it ready for the planning commission. Commissioner Hutchings commented, “Just because you can doesn’t mean you should” in reference to putting an R-2 development on Main Street.

Christensen added, “Waste management could not access these homes. How will they dump garbage? What about school busses? Busses are no longer allowed to stop on Main Street. There is not enough room in the subdivision for school busses.”

Residents of northeast Lehi also gathered to protest the Laney Property concept plan located at 900 North 1580 East. The 6.93- acre residential development was opposed because of the traffic hazards in a neighborhood with many children. LaVell Russon requested that the irrigation ditch on the west side of the property be piped and the trees removed.

Several neighbors complained that by creating the subdivision, the road will be dangerous because it will be a straight shot from 900 North to Lowes and Costco. The road will be 1580 feet long, which will encourage speeding. Tony Trane, who engineered the project, said, “The utilities already exist and must be under a road. There is nothing we can do about that.”

Chase Cooper, representing the developer, responded, “The reason Costco and Lowes have utilities is because of our willingness to bring them through this property. We will work with the city to make this a safe road. This project has been in the works for ten years.”

Hutchings moved to have staff create a solution to traffic issues. She moved to approve the concept plan. It was unanimously passed.

Other commission agenda items were given unanimous approval. They were:

Item 2-3 Public Hearing and recommendation of Jason Rickards’ request for the Vivian Estates Phase 2 zone change on 30.35 acres of property located at approximately 2600 North 300 East changing the zoning from TH-5(transitional holding) to RA-1(residential/agriculture).

Item 2-4 Pubic Hearing and recommendation of Brittany Fenton’s request for the Fenton zone change on approximately .33-acres of property located at 492 West 526 South changing the zoning from A-1 to R-1-12.

Item 2.9 Public Hearing and consideration of Brandon Lundeen’s request for conditional use approval for the Dentmaster Collision Repair Center site plan with an existing building located at 720 North 400 East in a Mixed-Use Zone.

Item 2-11 Public hearing and recommendation of Millhaven Development’s request for the Vista Acres concept, a 4-lot residential development located at 1221 North 100 East in an R-1-8 zone.

Item 2-14 Public hearing and consideration of the Boyer Company’s request for conditional use approval for the Holbrook Plat A Phase 10 site plan, a 6.63-acre commercial development located at 2150 North Holbrook Way in an existing Planned Community zone.

Item 2-16 Public hearing and recommendation of Lehi City’s request for an amendment to the Lehi City Development Code, Table 05-030-B, removing office/warehouse as an allowed use in the Commercial zone.

All information pertaining to the Planning Commission meeting is located on the city’s website, lehicity.org.