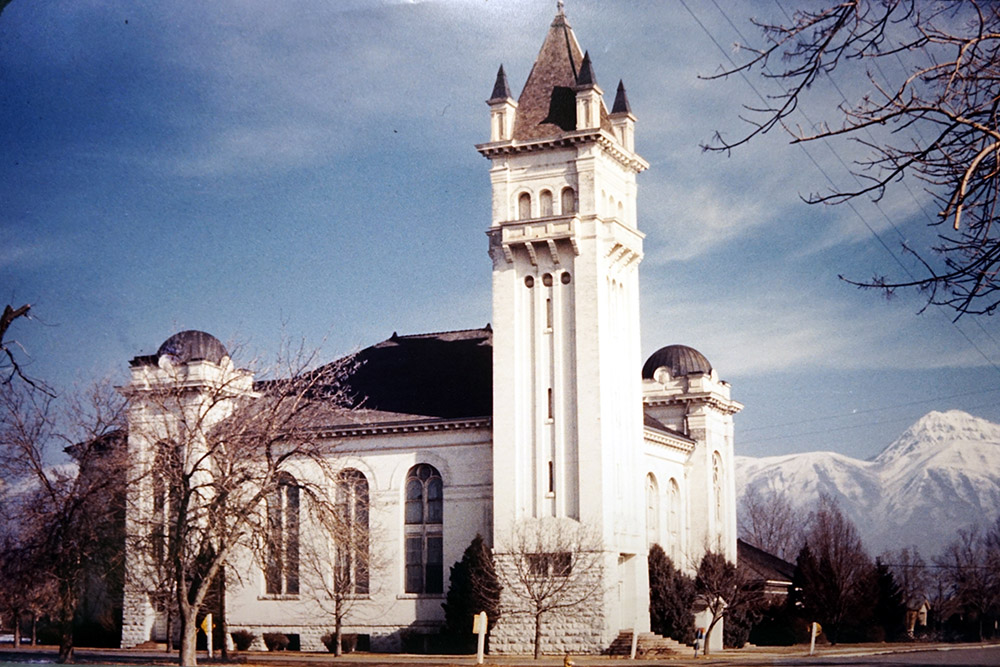 Living in a region dotted with restored, pioneer-built tabernacles, one might wonder why Lehi, the second-largest city in the state, doesn’t have one. The answer is easy, but in today’s perspective kind of sad.

Lehi did have a tabernacle, and it was the most iconic building in our skyline until its demise.

Much like the majestic tabernacles of Ogden, Salt Lake City, Provo and American Fork, Lehi’s tabernacle stood as a testament to the industry and fortitude of the early people of Lehi. For more than 60 years, the Lehi Tabernacle, which sat at the northeast corner of Center Street and Second North, served our community.

Although the edifice was dedicated in 1910, its first church meetings began in 1905 when the building was not fully complete. But by 1920, the four LDS bishops in Lehi determined the building was a financial burden, and it was sold to the Alpine School District for $28,000.

It became the High School Auditorium, where school, community and church events took place until 1929, when the school district announced it would no longer need the tabernacle as it would be building a new auditorium.

Just the year before, the Lehi Stake had been formed, and many Lehi residents hoped the tabernacle would be acquired to be the new stake building. But, according to Lehi historian, Richard Van Wagoner, the Presiding Bishop of the LDS Church in Salt Lake City deemed the building, “unsuitable,” and Lehi’s National Guard unit leased the building from the school district instead.

Unfortunately, in the early morning hours of Dec. 16, 1929, a guardman’s smoldering cigarette nearly burned down the building. More than $3,000 in damage was incurred.

Again, in 1931, the school district offered to sell the tabernacle to the Lehi Stake for $3,500. The offer was rejected by local church leaders, thinking leaders in Salt Lake City would reject it, and the building was boarded up.

It wasn’t until 1937, that the Lehi Stake, with the help of appropriated funds from the Church in Salt Lake City, reacquired the building. Remodeling was finished in 1941.

Van Wagoner wrote, “The main tabernacle auditorium, with its comfortable theater-style seats, was the cultural center of Lehi…Organ recitals, choral performances, road shows, and Promised Valley productions entertained many. … Civic and political gatherings, Father and Son banquets, Boy Scout Courts of Honor, seminary graduations, and high school commencement exercises are recalled in fond reveries by many of us.”

And yet, in 1961, it was announced that the Lehi Tabernacle would be razed to make room for a new LDS stake center. Despite opposition, the building was razed in the fall of 1962.

Today, all that is left of the Lehi Tabernacle is the cornerstone, which cost $60 that was raised by the contributions of 1,200 Sunday school children around the turn of the century. The cornerstone can be visited at the Lehi Historical Society and Archives at 34 E. 100 North, Tuesday-Thursday, noon to 5 p.m.

Much of the information in this article was taken from Lehi: Portraits of a Utah Town by Richard Van Wagoner.

The story of how Lehi got its Tabernacle is a tale of sacrifice and patience.

Lehi’s first meetinghouse for members of the Church of Jesus Christ of Latter-day Saints was completed in 1860. With a seating capacity of 500, the building was soon outgrown, and a tabernacle was needed. But it would not come easily.

In those days, the Lehi Ward, or congregation, was part of the Utah Stake, which was comprised of all the wards in Utah Valley. When the first Provo Tabernacle was to be built, Lehi, along with all the other wards, was assessed a portion of the cost as well as the labor. Those were difficult times for the people of Lehi and most had very little extra to give.

By the time the first Provo Tabernacle was built, it was already too small for the growing membership of the stake and a second tabernacle in Provo was planned.

Once again, each of the wards in the stake was assessed a portion of the cost as well as labor. In a January 2016, Daily Herald article, Lehi historian John Haws said, “The thing about Lehi, we had a lot of great masons, stone layers…. We had architects who built all over Utah, but they would come to Lehi for the stone and brick layers.” Construction of the second Provo Tabernacle, which is now the Provo City Center Temple, was finished in 1886.

When Lehi’s assessment for that second tabernacle was finally met in 1897, the Lehi Ward began planning their own tabernacle. Richard Kletting, who also designed the Utah State Capital, was hired as the architect, and in February 1900, excavation work began on Lehi’s tabernacle, which was located at Second North and Center Street, where the LDS Lehi Stake Center stands today.

Because Lehi’s tabernacle was not a “stake” tabernacle, funds and labor were provided by only the citizens of Lehi, both members of the LDS faith and non-members. Therefore, progress was slow but steady until the Utah Stake was reorganized in 1904. At this time, Lehi became part of the Alpine Stake, and once again, Lehi received an assessment for a new tabernacle, this time to be in American Fork.

The Lehi Tabernacle suffered again due to the lack of labor and funds. In his history of the tabernacle, Lehi historian Richard Van Wagoner said, “Seriously concerned about the deterioration of the thus far completed Lehi Tabernacle, a committee of Lehi men in the spring of 1905 called on [LDS] Church President Joseph F. Smith. The group asked for and received an $4,000 appropriation to push the building towards completion.” Five years after construction began on the tabernacle, its first meeting was on Sept. 3, 1905, though the building was not dedicated until Apr. 5, 1910, when President Smith offered the dedicatory prayer.

In the end, Lehi residents had helped fund four tabernacles.

Lehi historian Richard Van Wagoner said, “The Lehi Tabernacle was constructed of white pressed brick. The walls were 121 feet in length and 76 feet wide. The main auditorium was 80 feet by 60 feet and the main southwest tower, with an observation deck facing each point of the compass, was 112 feet high.”

The seating capacity in the main auditorium was approximately 1,100. The seats were arranged on a frontward sloping floor, which was unusual in those days. There was also a rear balcony similar to the one in the Alpine Tabernacle. In the front of the assembly hall were elevated choir seats behind a hardwood pulpit breastwork fronted by a beautifully handcrafted banister system. The giant pipe organ that was installed rivaled the one in the Salt Lake Tabernacle, according to Lehi residents.

Though its history was relatively short, the Lehi Tabernacle still has a special place in the hearts of residents of Lehi who remember this magnificent building.