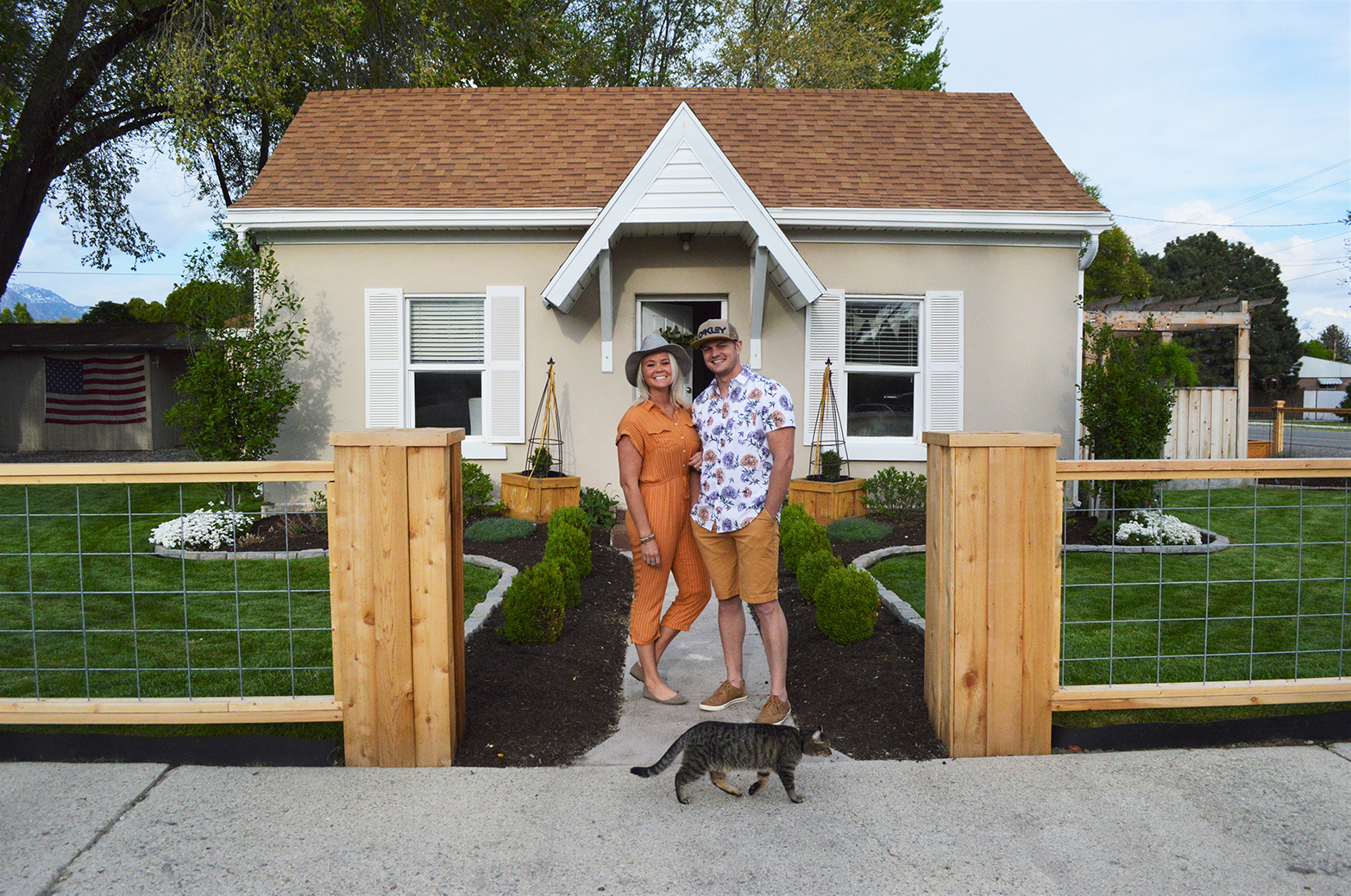 A small, 120-year-old house with thick adobe walls, a quirky layout, and in need of some significant updates, is not the kind of project just any newly married couple can tackle. Gentry and Zak Nash have been taking on large and small projects in their little house in Lehi over the last three years, making it their own.

“We’d just pick a project and go until it was done,” said Zak. The Nashes have done all the work themselves, with help from family, installing a custom fence, building and installing a fireplace, removing old kitchen cabinets and replacing them with ones Zak built, adding a sink and cabinet in the bathroom, painting, landscaping, and the biggest project of all – installing a large deck off the kitchen.

Since the Nash’s home is more than a century old, each project came with inevitable challenges. The adobe walls are two-feet thick and wi-fi wouldn’t leave the room. Zak Nash had to get into the attic and scoop out all the old, stinky insulation, 200 trash bags worth, and replace it with regular insulation so the house would hold heat. The small master bedroom was added off the kitchen many years after the home was built, leaving just one bedroom at the front of the house. “I don’t know where they slept!” Gentry marveled. The Nashes have added closet space in the bedroom with cabinets from Ikea.

Over the last three years, Gentry and Zak have developed a system of design and execution when it comes to their home improvement projects. “She has great ideas, but I’m a visual person and I need to see a picture or a drawing before I can build it,” explained Zak.

“I’m more meticulous and detail-oriented. He wants to get things done right away, but I go slower,” said Gentry.

“I’ve had to learn to slow down and pay attention to the details,” continued Zak.

The deck covered with a pergola has become the prime gathering place for Zak and Gentry’s extended family. There’s plenty of seating, a large dining table, a fence to block the view from the street, but still lets in the beautiful evening light, and, of course, a grill. “We have family parties here and the kids play in the treehouse. It’s been really nice,” said Zak.

Gentry Nash visited her sister and a cousin near Wines Park for several years before she and Zak got married, getting to know downtown Lehi. “I loved this neighborhood. It’s so quaint and quiet here and the bakery is close enough to walk to,” said Gentry with a smile.

The Nashes have an Instagram @robinsoncottagecollection where they post photos of the latest projects in their house and yard, as well as decorating ideas. They’ve started thinking about designing and flipping houses. “We like for homes to feel lived-in, like your Grandma’s house. It’s fun to try to create that feeling in a home,” said Zak.