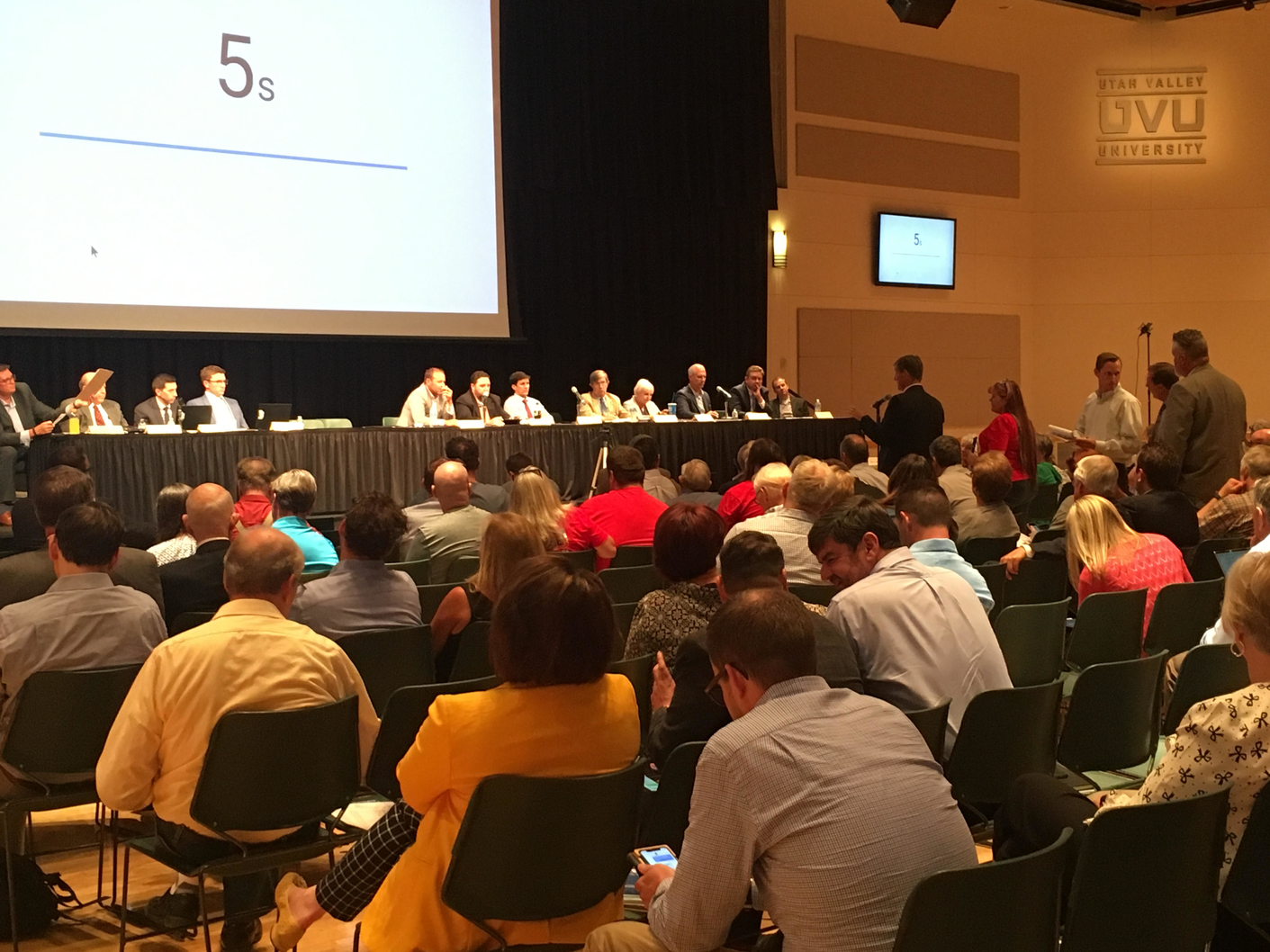 Around 200 residents from across the Wasatch Front gathered in the Grand Ballroom at Utah Valley University on Tuesday, July 30 for a town hall meeting about Utah state tax reform. Legislators presented the big picture on Utah’s current tax structure and potential alterations that might be pursued, then listened to 31 members of the public share their thoughts and suggestions.

It was the final of eight such town hall meetings being held by the Utah Tax Restructuring and Equalization Task Force, which was created during the 2019 session of the Utah legislature after an attempt to pass a comprehensive tax reform bill (HB 441) met with widespread and sometimes heated public outcry. The Task Force is made up of five state senators, five state representatives and four citizen appointees, a majority of whom were in attendance.

An open house was held just outside the ballroom prior to the start of the town hall at which Task Force members talked with attendees and visual displays and videos were on exhibit. The legislature appropriated $96,000 in HB 495 for the public outreach materials, including a website, strongerfutures.utah.gov.

Former state senator Pat Jones served as an efficient and effective independent facilitator. At the outset of the comment section of the meeting, she invited attendees to hold applause after each speaker and instead demonstrate support for a speaker’s statement with a show of hands.

“The ways Utah has funded the state budget in the past no longer meet today’s needs,” said the narrator in the video. A visual used to explain this position incorporated four pillars, one each for income tax, property tax, sales tax, and gas tax. The graphic showed more money going into the income tax pillar, with less going into the other three, creating an imbalance which caused the structure to topple.

The full video can be viewed by clicking the “Watch Video” button at the top of the homepage of strongerfutures.utah.gov.

Gibson said the legislature is working on that front, stating that the number of state employees has been decreasing since 2000 and mentioning the “zero-base budgeting” resolution passed in the recent session. The bill was sponsored by Rep. Jefferson Moss (LD 2) and directs the legislature to review its budgets from the bottom up over the course of five years.

Task Force co-chair Lyle Hillyard said that the legislature is moving forward on restructuring Utah’s tax system because legislative staff has looked at the issue and issued warnings. “We have staff who are not political, not Republican or Democrat, special staff…who say it’s coming,” he said.

After showing the video and discussing revenue trends since 1989 with the aid of a few slides (the short slide presentation can also be viewed at the Stronger Futures website), the floor was opened for comment to those who had signed up at the start of the meeting. Each was given one and a half minutes to speak.

Commenters came from across the Wasatch Front, with at least two traveling from Logan.

While there seemed to be widespread support for some ideas – such as dislike for the idea of creating a tax on services – there was a clear divide on the topic of amending the Utah constitution to change its current requirement that all income tax must be earmarked for education. Several commenters spoke in favor of the idea, and several spoke against.

Hyrum Bosserman, an attorney, said “It’s not a revenue problem. It’s just an imbalance problem.” Financial advisor Todd McChesney agreed. “I appreciate the honesty (in the PowerPoint presentation) that this is not a revenue problem; this an allocation problem.” He encouraged the Task Force to look at the tax exemptions granted to large businesses, which he said the Utah State Tax Commission estimated to total $65 million per year.

While several other echoed the idea that impending funding issues could be addressed by changing the tax structure to allow income tax to be used for programs other than education, several focused their remarks on explaining how education funds need the constitutional protection they currently enjoy.

Rob Smith, Assistant Superintendent for Alpine School District (ASD), attended the meeting with several school board members and educators from ASD. He advocated for maintaining the current dedication of income tax for education, with a suggestion to end the current use of liquor tax dollars for school lunch and replace that funding with education dollars, which would free up increasing revenues from the liquor tax for non-education uses.

Smith, along with a couple of other commenters, also suggested reinstating a sales tax on food, with credits for the economically disadvantaged.

At least five others representing education interests, including the Cache County Superintendent and Lehi’s State Board of Education representative Cindy Davis, also advocated for maintaining the protection of education funds under the constitution, expressing concern that education would not take priority if those funds were open to use in other areas.

Several of the speakers were technology industry professionals. Joseph Woodbury, CEO of Neighbor.com, said, “Why would we want to lead on taxing on what the economy is shifting towards? That will discourage…those services that are powering the U.S. economy. They will go to other states.”

Several attorneys expressed concern about the possibility that a new tax on services could curtail their ability to provide pro bono services for those in need, as well as the ability of the non-wealthy to afford private representation.

Herm Olsen, newly installed president of the Utah State Bar Association, read a letter from a man who had been charged with a felony and explained that “even a few hundred extra dollars in tax would have tipped the scales in favor of using a public defender at government expense.” He said the Utah State Bar “is committed” to working with lawmakers “to find another way, a better way” than taxing services from businesses to consumers.

A large number of speakers, including cosmetic surgeons, expressed disapproval of a proposal to tax elective cosmetic surgery. Some said it discriminates against women, who use the service more frequently than men. Others said it would be difficult for government employees to determine which procedures were medically necessary and which were elective.

Plastic surgeon Kimball Crofts said that when New Jersey implemented the first cosmetic tax, it quickly repealed it because it didn’t raise the anticipated revenue. He also said it would be very difficult and costly to implement and could raise issues with HIPAA.

Professionals from Young Living and NuSkin asked the Task Force to take into account the effect a new tax structure could have on both direct sales businesses and their distributors.

Elise Jones, Associate General Counsel for Young Living, said, “Competition in this industry is fierce,” and new taxes that affect distributors could cause both businesses and distributors to move outside of Utah. “Please keep our distributors and the direct selling industry in your thoughts,” she said.

Dave Decker, who serves on the Utah Water Task Force, urged the Tax Task Force not to include a new tax on water, stating that it’s a public good and should not be taxed, as was proposed under the rejected HB 441.

Members of the Tax Task Force assured attendees that they are working to approach the situation with a clean slate, not with a set of changes they intend to make no matter what input they get from the public. “Don’t think we have a set path,” said Rep. Robert Spendlove (LD 49, Sandy).

The panel expressed appreciation for the wide variety of practical suggestions they had heard, saying that the plan moving forward is to assemble input, hold more meetings at the Capitol and begin to make decisions.

“It is a hard discussion,” said Rep. Gibson. The public is encouraged to keep an eye on the process and continue communicating with their legislators and members of the Task Force.