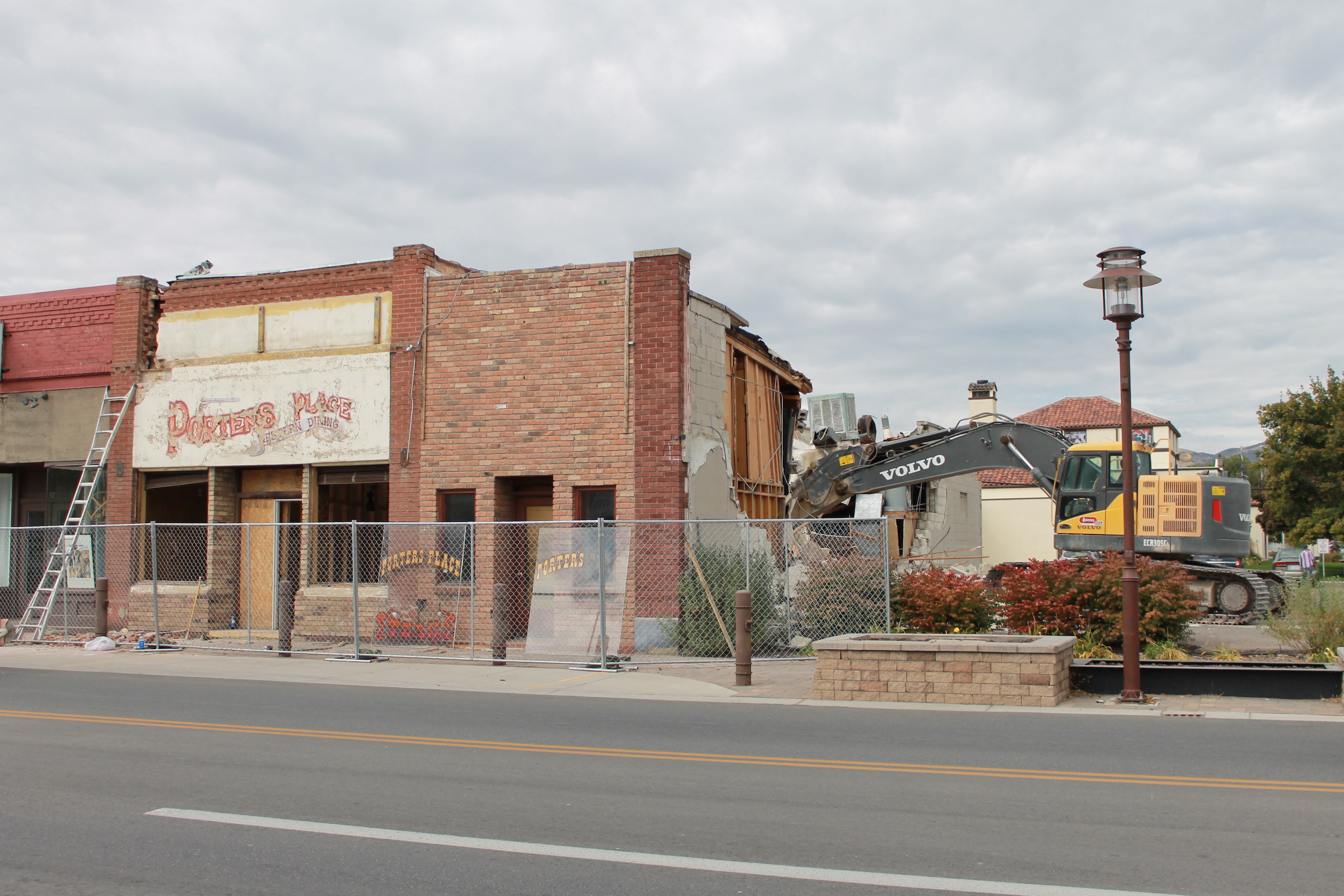 After a century on Lehi Main Street, the building that was home to Porter’s Place restaurant is in the process of being demolished. The iconic building was known as the home of Porter’s Place from 1971 to 2017. Lehi City purchased the historic building in 2008, leasing it back to Bob Trepanier, the operator of the restaurant. In December of 2017, the nearly 100-year-old sewer system failed, causing a shutdown and eventual sale of the building. After several weeks of deliberation by the Lehi City Council, the decision to evict Porters Place Restaurant and put the building up for sale was made. “Porter’s Place is a tough situation. We recognize the historic value that the restaurant has played in our community and know that it is sentimental for many. However, the cost of repairs is so great that we have to consider how to best manage taxpayer dollars.” said Cameron Boyle, Lehi Assistant City Administrator.

In January of 2018, the City issued a Request for Proposal (RFP) soliciting bids for the purchase of the property along with the adjacent building and parking lot as a package deal. The RFP had specific criteria for proposals to incorporate the historic “look and feel” of Downtown Lehi. The City received three bids to purchase the properties and ultimately selected the RFP made by Lehi resident, Brian Brown, owner of Parker-Brown Real Estate. The winning bid was for $150,000. “Brown’s proposal best fit the criteria in concept, design, layout and price” said Lehi Economic Development Director, Marlin Eldred.

Lehi City Planning Commission got the first look of the proposed new building in early November 2018. Concern over whether the building should be three or four stories dominated the discussion. The Planning Commission concluded a neutral recommendation to the City Council after a split decision vote that didn’t meet vote thresholds to pass or deny. The passionate plea from Lehi citizens to limit the building to three stories continued to City Council, which ended up unanimously denying Parker Brown’s request for a fourth story. In early 2019, Parker Brown received concept plan approval for the revised three-story proposal which included mitigating parking concerns with a lease for parking stalls at the City Legacy Center and a request to make the project more “historic” to fit into the Historic Commerce Zone.

Friday morning, Lehi residents witnessed the beginning of the end for the Main Street building as a construction crew rolled into town with demolition equipment. By midafternoon, the iconic building demolition was underway with crushed cinder block scattered about and historic pieces preserved to the side. “Demo should be done this week.” said Brian Brown. News of the demolition quickly spread on social media, with many residents expressing their polarizing feelings about the upcoming changes. Many wondered “What’s next?” for downtown Lehi with rumors about a potential restaurant.

Regarding the new structure, Brown said, “Once we start construction, we will be marketing the property for a tenant on the first floor. We have had a lot of interest. Once it is framed, we should see some more interest. We [Parker Brown Real Estate] are planning on using the second floor for our offices and the third for condos [4 units].” Currently, the Parker Brown offices are located in the nearby Main Street Colonial House, another Lehi landmark. The City is expected to receive Parker Brown’ site plan later this week, according to Councilmember Paige Albrecht.

“We are hoping to have the [new] building competed by this time next year,” said Brown.

Lehi’s “lady” gets a facelift