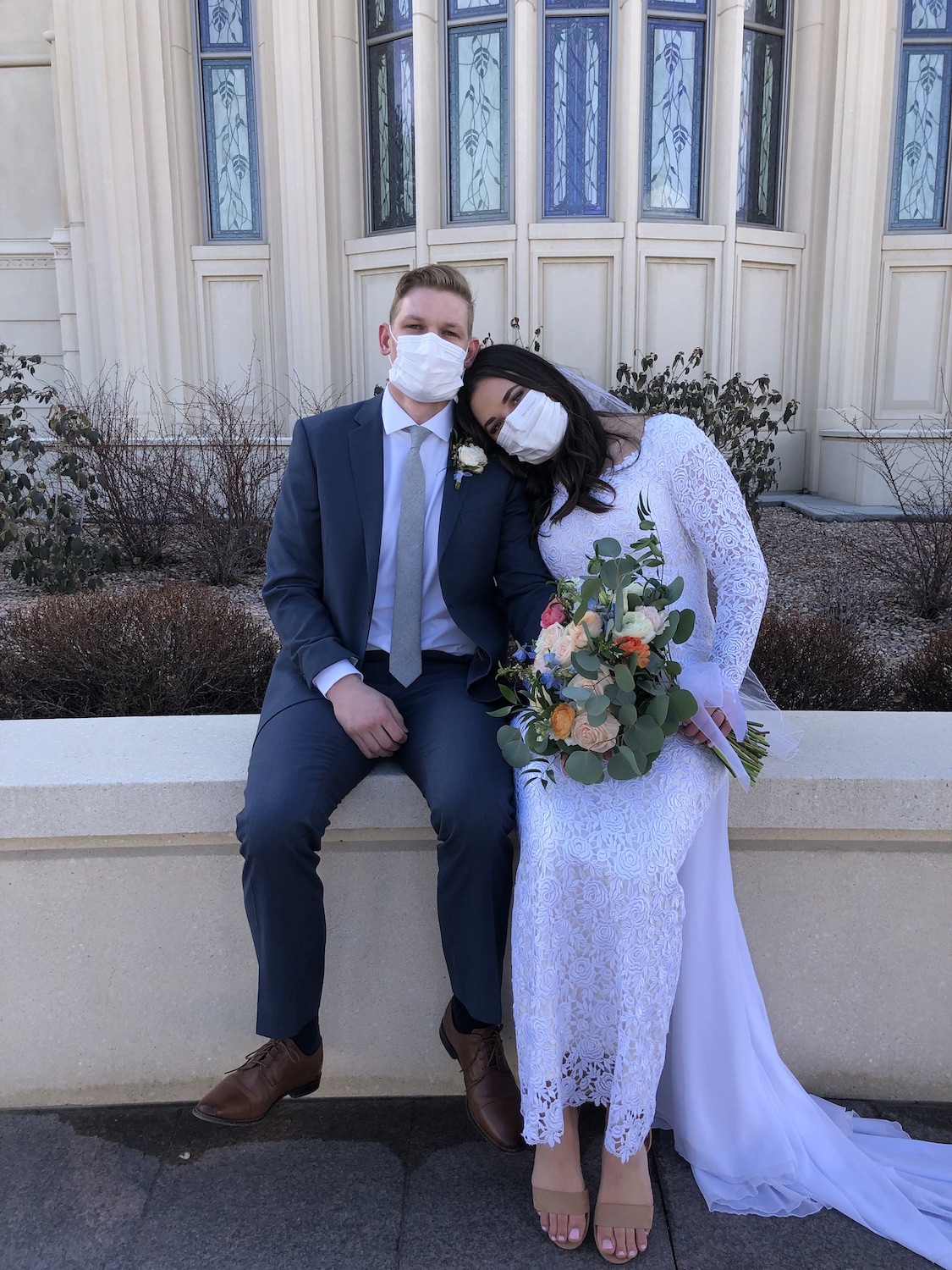 Lauren Jarvis and Trevor Davidson’s wedding did not go as planned.

But their photos — in which they’re wearing medical masks, have their wedding party spaced out and try to kiss as a measuring tape marks six feet between them — have gone viral on social media as the couple has tried to accept the unique chaos COVID-19 has thrown into their lives.

“At that point, all we have to do is embrace it, and it is what it is, and I think those photos will be memorable to show our kids what’s going on at the time,” Davidson said.

Jarvis, who works for a Lehi orthodontist, and Davidson, a Brigham Young University student, originally planned to get married on March 28 in The Church of Jesus Christ of Latter-day Saints’ Oakland California Temple, where they are both from. But as guidance was released to avoid gatherings of more than 50 people, venues and caterers began canceling, and then the temple itself closed, they knew they were going to have to adjust.

Plan B involved moving the wedding to Sacramento, but then the LDS temple there closed, as well. They considered flying immediate family out to get married in Hawaii, which ended up not being possible.

“We were trying to decide what to do because we didn’t want to postpone,” Jarvis said.

Her mother worked to change plans as more and more venues closed.

“There was a bit of panic, at first,” Jarvis said.

Then March 18’s earthquake hit Utah, temporarily shutting down the Salt Lake City International Airport. They were worried that family wouldn’t be able to make it in time for their wedding. After a handful of flight changes, the families were able to attend.

They were married in the Payson Utah Temple on March 20 and held a small luncheon for immediate family afterward. Their photographer tracked down an available florist and baker, and Jarvis’s work let them take some medical masks to help them make light of the situation.

More than 100 people in Utah had been diagnosed with COVID-19, a novel strain of coronavirus, as of their wedding day, leading to the closure of churches, performing arts venues and a soft closure of public schools as people were advised to socially distance themselves from each other.

The couple planned to honeymoon to Cancun before discovering during their reception that the United States-Mexico borders were being shut down. They changed their plans and booked tickets to Hawaii later that day.

Jarvis knows other couples who have moved up their weddings due to fears about COVID-19.

“I think this is super stressful,” she said.

Despite all the challenges, they’ve tried to find humor in the situation.

“Things have a way of working out, even when there is craziness going on,” Jarvis said.

Davidson said everything ended up better than expected.

“I am excited that it finally happened,” he said.