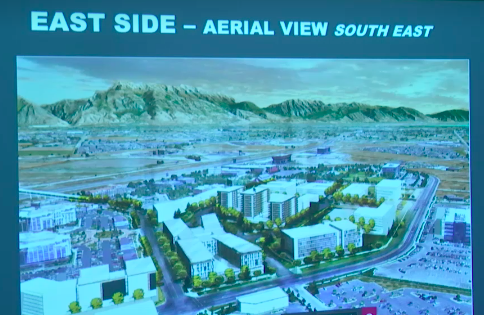 The long-awaited Thanksgiving Point Area Plan update was presented to the City Council on Tuesday night with all Council members present during the remote meeting. The plan has been in the works for over a year after the City told Thanksgiving Point and nearby developers that building needed to cease until a long term plan was created and adopted to address and alleviate traffic failure in the area.

Presenting the first draft of the 780-acre area plan was Nathan Ricks and Andrew Bybee from Stack Real Estate along with Mike Washburn, CEO of Thanksgiving Point.

“This is a world-class transit-oriented development (TOD)” said Ricks. “The more we look at TODs all around the Country, none of them have all the pieces that Lehi has.”

Ricks continued by laying out the objective they are trying to accomplish with the future project, using the acronym “S.M.A.R.T” to create a development that is sustainable, mixed-use, attractive, realistic, and transit-oriented. The plan has a build-out timeline of approximately 40 years.

Along with the dense residential buildings, the project includes additional office buildings, several parking garages, retail, including an Apple Store, entertainment opportunities like an indoor climbing gym, a grocery store, a walking trail network, and 77 acres of public open space.

Regarding the plan, Ricks said they hope to build, “…a very urban environment that is walkable, pedestrian-friendly with wide sidewalks, lots of trees and benches. All the things you want to make a friendly, walkable, and inviting area.”

Ricks mentioned the need for a grocery store in the area. He said the group hopes to attract a high-end grocer like Trader Joe’s or Whole Foods. “A neighborhood grocer is a key component and a lynchpin to a successful T.O.D.,” said Ricks.

The future development would begin phase one on the soccer field adjacent to the Lehi FrontRunner Station with a parking garage wrapped with apartments. It would continue with a similar product that would also include first floor retail with apartments above located on the corner of Ashton and Executive Blvd.

The largest casualty of the long-term plan is the Thanksgiving Point Golf Course which would be redeveloped into residential homes and public green space.

“If you’re a golfer it’s great. If you live there and look out on it, it’s great, but for most people, it’s not accessible, so we think there is a trade-off with dedicated open green space for the community,” said Washburn. Washburn also noted that this new plan is necessary for the long-term viability of Thanksgiving Point.

The development team addressed infrastructure and traffic by referencing a traffic study by Hales Engineering that stated the nearly complete improvements to I-15, a future Clubhouse Drive extension and the functionality of TODs would support the proposed high density in the plan.

The proposed Clubhouse Drive extension has been mired in controversy for several years. Lehi City had over $9 million in available state funding for the project but the outcry from nearby residents quashed the plan. With the new area plan including the east-west Clubhouse road extension, funding would now become the ultimate hurdle.

“Will you be helping build out the roads in this area?” inquired Councilwoman Katie Koivisto, who has been an outspoken critic of the Clubhouse Drive extension.

Rick answered by saying Stack would be responsible for internal project roads and additions but wouldn’t help with regionally significant roads like Clubhouse Drive.

Councilwoman Paige Albrecht shared her thoughts on the significance of the Clubhouse Drive extension. “That’s a key component for me to support any kind of development in the area.”

Another concern for several Council members was relying on uncontrollable factors for the project to be successful like the Clubhouse Drive extension and attracting grocery and retail stores.

“This is very hypothetical and there is no guarantee that these stores will be coming,” said Koivisto who mentioned that her neighborhood in Holbrook Farms is still waiting for a grocery store.

Councilman Paul Hancock brought a different perspective saying, “Holbrook Farms can be used as an example of challenges when you don’t have enough density.”

Hancock also reserved any support until the developers can provide a traffic study that shows the capabilities of the infrastructure without the Clubhouse Drive extension and a grocery store.

“I expected when this came through that traffic solutions would be a primary component and I’m seeing them be compounded and not alleviating them,” said Albrecht.

Koivisto expressed support for Albrecht’s statement and added, “You are wanting to put the City of Highland [12,000 residents] on this area.”

“We’re going to have to go ‘up’ and not ‘out’ in Utah. This is addressing the future realities coming at us,” replied Ricks. Bybee added, “This is big, this is game-changing, this is world-class. There is nothing like this in Utah.”

To conclude the agenda item, the development team said they appreciate the questions and feedback and will work on some changes, as well as begin to work with nearby residents for draft two. Mayor Mark Johnson added that this process will take several months and will require a lot of partnerships with City planning, engineering, and utilities.