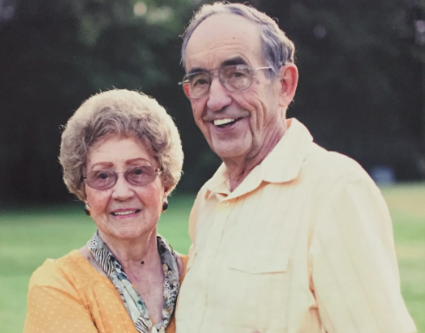 Rial and Laurel Berry have been a part of Lehi’s great heritage for most of their lives.

Even though Rial was born and raised in Cedar Fort, Lehi was a second home to him in his later school years. Rial’s mother, Sarah Strickland Berry, gave birth to him at their home in September of 1930. His father, Woodruff L. Berry, was a beloved schoolteacher until his unfortunate passing at age 39, when Rial was just three years old.

One of eight children, Rial was expected to work at a young age to help the family survive. When he was 11, he worked making bricks, many of which are in homes still standing today. At 14, he got a summer job at Deseret Chemical in Tooele. He ended up working there every summer until they hired him full time after graduating from Lehi High School. He worked for Tooele Army Depot for 39 years until he retired.

In school, Rial was involved in FFA. He loved sports, especially football, and played for the Lehi High School team. After practices and games, he and his friend would often sit in Wattie’s Café or Evans Café on Main Street until they could catch a ride with someone traveling to Cedar Fort. As a senior in high school, Rial and his two brothers began farming their dad’s ground in Cedar Valley. He did this work until just a couple of years ago.

In September of 1931, Laurel was born to Chester and Georgia Whitman Peterson in the Lehi Hospital on State Street. Her father was a carpenter by trade and helped build the original Lehi Fifth Ward building. In high school, Laurel was involved in the Booster Club and color guard.

In 1950, a year after Laurel graduated, the couple married. They have five children: Leslie, Collette, Rial Kent (who died at 18 months), Rialeen (deceased) and Todd. They have 20 grandchildren and 33 great-grandchildren.

Rial belonged to the Junior Chamber of Commerce, then called the JC’s Club, a national community service organization. Some of Rial’s favorite projects were putting up Christmas lights and decorations on Main Street and participating in the Donkey Rodeo baseball game. It not only entertained many spectators, but the club raised funds needed for some of their service projects.

Back then, each organization in the wards of The Church of Jesus Christ of Latter-day Saints created a float for the Lehi Round-Up parades. Rial and Laurel had a shop behind their house, making a perfect spot to build a float. Rial built a float platform that was used for many years by the Lehi 5th Ward. One year they had two floats in the shop, and one took the top prize. Laurel and others spent many hours meticulously curling streams of crepe paper to glue on the floats.

Laurel made bread every week. Today, she is known as the “Ice Cream Grandma.” Even at the age of 89, she is still making Neapolitan ice-cream cones for her grandchildren. Laurel worked for Broadbent’s and then Powers Store, which became Reams Boot and Jeans.

Rial and Laurel are devoted members of The Church of Jesus Christ of Latter-day Saints and have enjoyed serving diligently in a wide variety of callings. Throughout their lives they have always been concerned about others and have lightened others’ burdens by providing meals, helping with Christmas, sending encouraging notes and assisting quietly with financial needs.

Their lives are evidence that the most important things to them are family, faith, friends, neighbors and community. The Lehi Historical Society and Archives is delighted to honor this great couple for Lehi Heritage Day 2020.