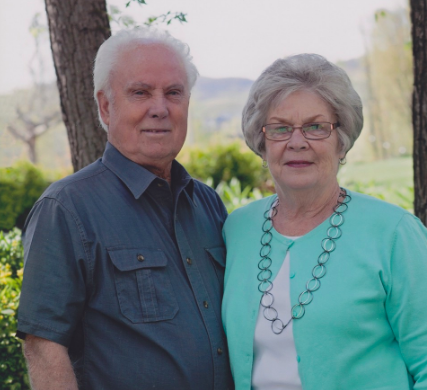 Sustaining a strong heritage and legacy in Lehi has been a key driving force in the lives of Wayne and Loraine Carlton. The couple has never doubted that Lehi is the best place to reside and raise a family.

Wayne is the son of George Albert and Hazel Porter Carlton, who moved their family from Draper to Lehi in 1943, settling on Trinnaman Lane. Loraine is the daughter of Dean and Irene Binns Evans of Lehi. Her ancestry traces back to Bishop David Evans, Loraine’s third great-grandfather, and first bishop of The Church of Jesus Christ of Latter-day Saints in Lehi.

Both Wayne and Loraine attended Lehi Grammar School, which was located where the Legacy Center is today. Loraine was a member of the first sixth-grade class to move into the newly constructed Lehi Elementary School in 1951. Wayne, a 1956 Lehi High School graduate, and Loraine, a 1959 LHS graduate, often reminisce about their high school days and classmates.

Wayne and Loraine married on Apr. 14, 1961, in the Salt Lake City Temple. Their first residence after marriage was in American Fork in the home of Loraine’s grandmother. After living there for eight years, they built a new home in Lehi. In 1969, they moved again—this time next to Wayne’s parents on Trinnaman Lane. They have lived there ever since.

Throughout the years, Wayne and Loraine have served the community in many ways, making a difference in the history and lifestyle of the Lehi we all enjoy today. They were members of the “Lehi Dance Set” for several years and were officers in 1971. Beginning in 1948, Lehi Dance Set was made up of married couples from the LDS Lehi Stake. They met bi-monthly for dinner dances, guest nights and invitational dances, all planned by the group. The group disbanded in 1975 due to a lack of membership.

Wayne and Loraine were also members of the Lehi High School Booster Club for many years. Both enjoyed their time serving others in the community and have been long-time supporters of Round-Up Days and city celebrations. They built several floats for the Miniature Parade in their garage and helped with many others.

Wayne served on both the Planning and Zoning Committee and the Parks and Trails Committee for Lehi City. This experience propelled Wayne to run for Lehi City Council. He was elected to 2 ½ terms between 1982 and 1995. His responsibilities included overseeing the Lehi Power Department and Lehi City Cemetery. Notable city improvements that occurred during his tenure include the citywide pressurized irrigation system, moving and saving the historic Utah Southern Railroad Depot at 225 E. State St., the creation of entrance parks at the north and east entrances of Lehi and construction of the current Lehi City Hall building. During those years, Micron came to Lehi, and Thanksgiving Point began construction.

Wayne also served on the Cyprus Federal Credit Union’s Supervisory Committee and Board of Trustees for 39 years. The couple served at the LDS Mount Timpanogos Temple for six years and as Guest Service missionaries at LDS Conference Center for five years.

A Pioneer tribute to Alyssa Eav, the girl who changed Lehi High