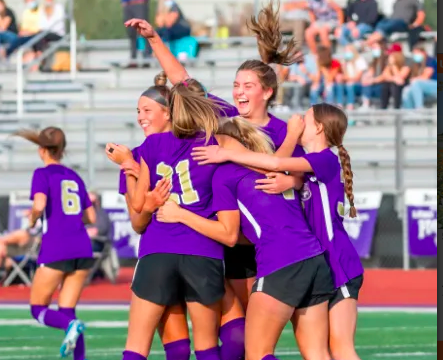 The Region 7 champion Lehi girls soccer team continued their winning ways by defeating Mountain Ridge 3-1 at home on Oct. 8 in the first round of the 5A state playoffs.

This was the third meeting between Lehi and the region foe Sentinels this season.

With the new playoff bracketing procedure, teams are more likely to face opponents from the same region early in the tournament.

Mountain Ridge senior forward Sophie White got behind the Pioneer back line to score in the 15th minute of the first half to give the visitors an early lead.

After that, the Lehi defense solidified and gave up nothing for the remainder of the game. Pioneer freshman Erin Dahl shifted positions and was able to mark White, preventing the speedy forward from scoring again.

“Our defense just needed to settle in and stay organized. Once we settled down, our back line was fantastic. They have been amazing this year,” said Coach Tim Graham.

“We also made a change in the midfield and dropped Erin Dahl to the number 6, which really helped us stay organized defensively. It also allowed Ally Dahl the freedom to get into the attack more, which was exactly what we needed,” continued Graham.

The Pioneers offense did not play with precision early in the match. In spite of having numerous free kick opportunities due to fouls called against Mountain Ridge, Lehi was uncharacteristically unable to convert on any of the set pieces.

After the Mountain Ridge goal, a group of sophomores came off the bench and injected much needed life into Lehi’s attack.

Sophomore forward Sarah Ballard finally put the Pioneers on the board with 3:22 remaining in the half.

Lehi junior Ally Dahl played the ball into the box on a free kick. Sophomore Olivia Smith tracked it down and shot it, but it was deflected by a Mountain Ridge defender and bounced away from the goal.

Ballard was in the perfect position to slot the ball into the net from 10 yards out.

“We really had some major contributions from our bench today,” the coach said. “We made some substitutions that really gave is some energy in the first half.

“Sarah Ballard’s goal was huge for us; that, along with the energy of Olivia Smith and Reagan Jorgensen, really help spark our team,” he went on.

The game stayed tied at 1-1 until Lehi Junior Ally Dahl placed the ball just under the crossbar to score with a left-footed blast from 23 yards out in the 59th minute.

Just two minutes later, senior forward Kennedi Schmidt sealed the victory for the Pioneers when she headed an Ally Dahl free kick into the back of the net for the final tally of the game.

The Pioneers defeated the Timberwolves both times they met during region play this season (3-1, 3-2). However, Timpanogos is a surging team on an impressive winning streak. They have outscored their opponents 25-6 in the last 5 games.

The Timberwolves defeated No. 23 Provo 7-2 in the first round.

According to Graham, Lehi must stay focused in order to play their best soccer against tough competition in the state tournament.

“We need to be prepared mentally and continue to enjoy the game. If we can stay loose and not lose focus, we should be good,” he said.