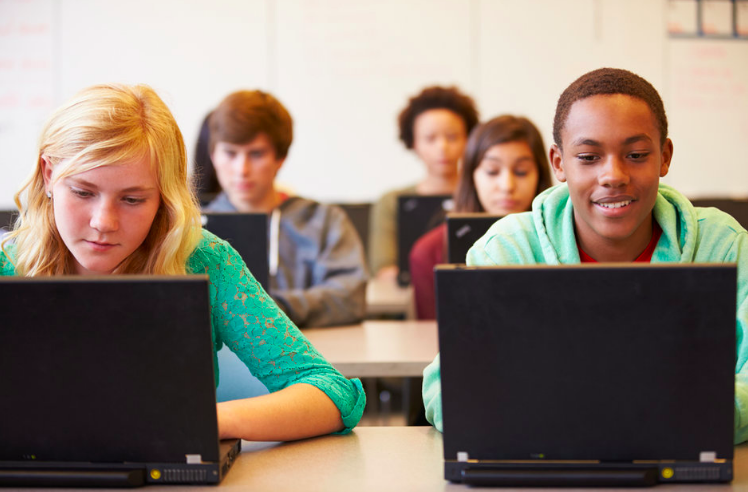 Junior and high school students could receive individual laptops they could use at school and home under a new proposal from the Alpine School District.

“We are aiming for transforming the kind of education our kids get and transforming the learning outcomes,” Blaine Edman, the district’s administrator of technology, told its governing board during an Oct. 27 meeting.

While no vote on the possible initiative was scheduled, Edman approached the board to gauge interest in further discussions on the proposal.

The district currently has about 67,000 Chromebooks, a sharp increase from the 15,000 it owned in 2014. The COVID-19 pandemic accelerated computer purchases in the district as more than 80,000 students transferred to at-home learning last spring.

Edman said many schools in the district had contacted him about purchasing additional devices.

“Schools are heading that way on their own,” he said.

Under the potential district-wide plan, students would receive a new Chromebook in ninth grade. They would keep the same computer for four years, with the option to buy it at the end of their senior year. The Chromebooks have a lifespan of about four years.

Edman said the plan would give lower-income students the ability to be given the laptop after leaving high school.

Chromebooks currently stored on carts and wheeled into classrooms would be distributed to students to take home. Edman estimates the district would have to replace a quarter of its existing Chromebook inventory each year, costing about $3 million.

“Many of our schools are prepared and have the devices or have the budget to buy devices to get there,” he said.

The district would also need to hire additional technicians for junior high schools.

Edman suggested adjusting technology fees to help cover costs. Currently, schools may charge a student up to $45 for a technology fee. Edman recommended proposing a $50 district-level fee and another $10 school-level fee.

As a parent, Edman said he doesn’t like fee increases but would feel better about a technology fee if he knew it was supplementing the price of a Chromebook.

Adjusting the fee would bring in about $1.5 million. Edman said the district’s Vision for Learning capital had averaged about $1.8 million for secondary schools. Additionally, CARES Act money has been allocated to improve the district’s network, a process initially anticipated to take three years but will now be finished by Christmas.

Board members had several questions and concerns about the plan, including asking if students could use personal devices in schools (not provided Chromebooks). Edman said that could cause issues since they don’t interact on the school’s networks.

“There are limitations for how home devices work in the schools,” Edman said.

Julie King, a board member, said she was uncomfortable committing to raising school fees outside of the board’s annual vote on the district fee schedule. She also pointed out

that the state legislature has been cracking down on school fees.

“I definitely have a concern about school fees being a sustainable source [of funds] based on some of the bills passed in the last few years regarding those,” King said.

Another concern surrounded switching to a greater emphasis on technology, especially with some parents who have restrictions on their students’ screen time.

“I am concerned that those parents may want options for their kids, and if we are moving from permission-based to disclosure-based, that presents some issues,” King said.

She also said she didn’t think it was the best time to fund a one-to-one initiative and would rather see additional funds go toward an employee bonus for their work during the pandemic.

Edman responded by stating that schools are still telling parents that their students need their permission for their devices but said there was no way to avoid using computers in the classroom.

“The truth is, there really isn’t an option right now,” Edman said.

He said that if the district wants to launch an initiative in the summer, it will have to order Chromebooks in the next month or so due to a six-month backlog because of a worldwide microchip shortage.

Amber Bonner, a board member, also voiced a question about whether adding technology would increase student achievement.

“I would like to be part of a conversation about how that [additional computers] directly relate to increasing student achievement instead of something we would like to have,” she said.