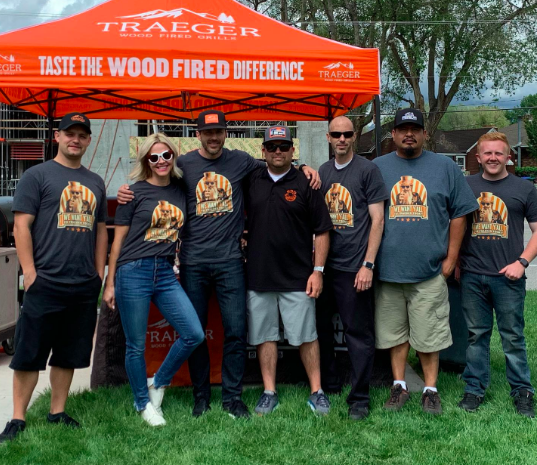 Eight years ago, Steve Johnson and his Lehi-based family opened Utah BBQ Company. Now in 2020, with four locations throughout Utah, all named BBQ Pit Stop, the stores have become the one-stop-shop for all things for the smoker and barbeque enthusiast. The store on State Street in Lehi was the first.

Johnson has always been a self-proclaimed “foodie” and every-day cook for his wife and kids. When he became interested in barbequing and later began competing with his delicious dishes, he saw the need for a BBQ goods store in Lehi. That’s when he made the bold decision to open a barbeque specialty store. “The BBQ Pit Strop is a place where we can help people learn about barbeque. Customers can come in and try it all before they buy it to make it sure it tastes the way they want it to,” said Johnson.

Johnson, an entrepreneur at his core, was hesitant to start a new business, but he was shocked at how quickly it became successful. Since 2012, the Utah BBQ Company has opened up three other locations in Layton, Salt Lake, and, most recently, St. George, with plans for another store already in the works. Johnson also has an online store. “The fact that we have four stores is a testament to how into barbeque people are around here,” said Johnson.

Lehi’s BBQ Pit Stop is every griller’s dream come true, with fantastic meat cuts, top of the line smokers, and over 200 award-winning spice rubs in stock. Each store is now famous around this time of year for one thing–their insanely delicious Thanksgiving turkey. Shoppers can purchase a Norbest Sweetheart roasted turkey at each location, known for holding moisture and remaining tender through many preparation techniques. Johnson says they’ve already received dozens of calls asking about the Norbest turkeys, and the Lehi location often sells out before Thanksgiving Day.

The sweetheart Norbest turkeys arrive frozen, and many customers have already picked up their Thanksgiving bird to ensure they’ll be one of the lucky 600 customers who get one from the BBQ Pit Stop every year. “So many people come in after Thanksgiving and tell me, ‘dude I don’t even like turkey, but that stuff is insane,'” said Johnson.

Johnson still competes in barbeque competitions across the nation, often facing internationally known grill masters. The BBQ Pit Stop offers a wide variety of classes for their customers, ranging from courses specializing in turkey or brisket to basic barbeque 101, which covers the fundamentals of cooking meat and poultry in the BBQ.

This time of year is busy for the stores, as grills and smokers have become an increasingly popular Christmas gift. “I see women coming in here all of the time rolling their eyes, complaining about the prices of the smokers,” said Johnson. “Without fail, four to six weeks later, they’re back in the store telling us it was the best purchase of their life because their husband is making dinner for the family every night.”

New nacho shack in Lehi is the big cheese