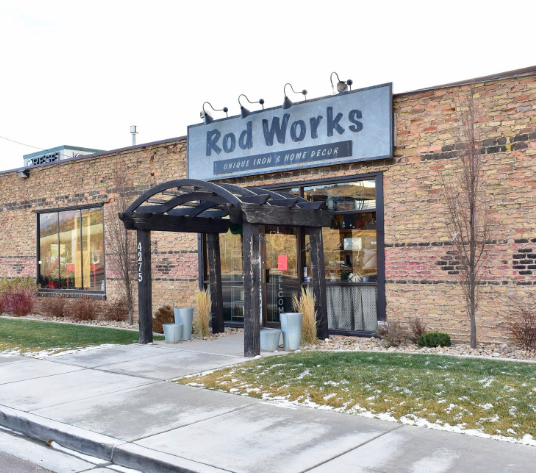 Like many home-grown small business stories, “Rod Works began in a small shop out behind their house,” said Aaron Brackett, Operations Director for Lehi-based Rod Works. Lehi resident Kristen Tuttle had a vision for some unique metal décor for her home. Her creative juices began to flow, and she put her husband, Mark, to work creating. He went to work in his little shop in their back yard, and her vision was realized. This humble beginning was the start of a thriving business that operates an online store, two corporate stores and seven franchise locations in five states.

As demand for the Rod Works designs grew, Kristen and Mark began creating products for friends and family and eventually for home parties. They continued this way for a few years, but demand for Rod Works products outgrew home parties and their basement location. Soon the couple bought the building where the current Rod Works in Lehi is located.

With the increased demand for products, Rod Works developed a great partnership with one of their wholesale suppliers, VIP International, out of California. In 2008, Rod Works purchased VIP International and launched an international wholesale operation. Kristen continued as a creative force while Mark Tuttle and Brackett began building the retail and wholesale business infrastructure. Scott Giles, who had been designing and manufacturing products for years at Rod Works, began compiling design ideas, and from there, the wholesale to retail partnership began.

According to Brackett, “Everyone from customers to employees is a part of our design team, which is what makes us unique.” Employee and customer collaborations have led to the continued success of Rod Works.

What began as just a fun idea in 1996 has blossomed into a successful enterprise and generated home décor for thousands of homes over the last 25 years. While home décor continues to change, Rod Works has managed to capture popular and appealing home décor and current interior design trends. A customer recently said, “If I want to find a special item, I just head out to Rod Works. They always have something fresh and new for my home.”