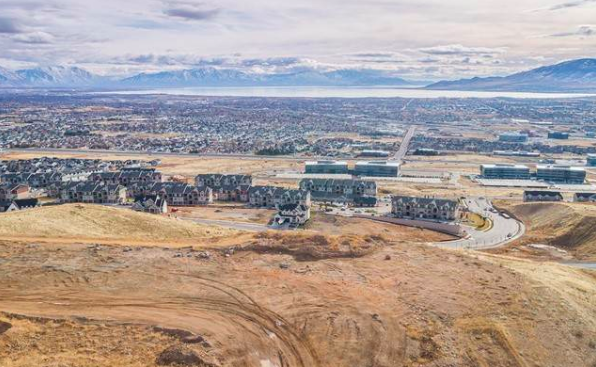 The name of Lehi’s newest middle school will be geography-based.

The school will either be named Canyon Hills Middle School, Hilltop Middle School or Viewpoint Middle School, according to a proposal presented Jan. 12 to the Alpine School District Board of Education.

“I think any three of those names are going to be excellent names for this new school,” Jennifer Grover, the chair of the Skyridge High School Community Council and co-chair of the new school’s naming committee, told the school board.

The district sent surveys to students’ parents in the middle school’s feeder schools to gather potential names. Those submissions were then narrowed down to a top 10 by the naming committee before being reduced to a final three. The committee also consulted students and the Lehi Junior High School Student Council to determine which names, mascots and colors were their favorites.

The district received more than 1,900 submissions for possible names. Due to the pandemic, the committee’s meetings were all held virtually.

“They were just instrumental in helping get feedback from the community to what they would like to name this new school,” Grover said.

The new middle school is located in north Lehi, above Timpanogos Highway and near the Micron Technology campus. The school is expected to open in the fall at capacity, with 1,659 students for the 2021-22 academic year. The school’s population may drop to 1,583 students in 2023. The district’s 2016 bond funded the construction of the project. The school will be closed to students outside of its boundaries for at least the first year.

Aaron Barth, the school’s principal, told the board that Canyon Hills Middle School was selected because it’s the same name as a nearby neighborhood, pays homage to the rolling hills in the area and sounds similar to other names in the district. Barth said it was the name that received the most community submissions.

“As we talked about it, this felt like a safe choice,” he said.

Hilltop Middle School was selected as a finalist because it signifies a direction while acknowledging a student’s journey. Barth said it’s a unique name.

“There’s not another name like this in our district,” he said.

Viewpoint Middle School, he said, was chosen because of the school’s panoramic view of the Utah Valley and because the building is close to the Point of the Mountain. Barth said the name promotes a vision and has meaning.

There was not a consensus on which name was the favorite. While Canyon Hills had the most community entries, Barth said the committee’s choice was Viewpoint, and his was Hilltop.

He said that Viewpoint Middle School was only submitted twice out of the 1,900 suggestions.

Barth liked Hilltop because it is original.

“I feel it is the most unique and stands out the most, and that is what I want for our students,” Barth said. “I want them to stand up and stand out and be proud of who they are, so I like the name.”

Board members did not indicate a preference for any name, nor did they make comments about disliking any. The board will vote on the name choice at a future meeting.

While three names were suggested, the board has previously added names to the list, similar to the 2018 process of naming the nearby Belmont Elementary School.

While the school’s final name has yet to be determined, its mascot and school colors have been chosen. Students will be the Raptors, and the school will use gray, green and an accent gold as its colors.

“It will help us stand out, as there is no other gray, green and gold school in our district at this time at the secondary level,” Barth said. “We are trying to be unique in our approach, and we are truly excited.”

He said students were extremely excited about the mascot and that the Lehi Junior High School Student Council told him they didn’t care about the school’s name — as long as they got to be the Raptors.

Amber Bonner, a member of the school board, was happy with the mascot and color choice.

“I love the green, I love the Raptors,” she said. “Those are both unique in our secondary schools.”