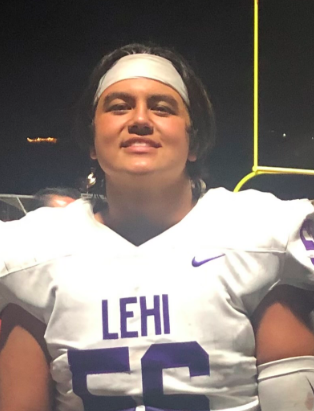 A group of Lehi youth was “couch surfing” in a Jordan Willows church parking lot late Tuesday afternoon, January 12, when one young man was seriously injured. Austin McWilliams suffered life-threatening injuries when a couch fitted with casters flung him into a concrete wall by a vehicle pulling the sofa. McWilliams was airlifted to Primary Children’s Medical Center, where he underwent surgery. “It’s touch and go,” said family friend, Jake Anderegg, regarding McWilliams’ injuries.

Another youth suffered a concussion and fractured leg and is recovering.

McWilliams is a 15-year-old sophomore at Lehi High School. He was the starting center and snapper on the Lehi High School football team last fall and has been involved in the Lehi youth football scene for years. At 6’2″ and 280 pounds, he is a gifted athlete with a promising sports career ahead.

According to Anderegg, “Austin is one of the youngest players to start varsity at Lehi High School in my recollection. He’s outstanding.”

Ed Larson, the head football coach at Lehi High School, said, “We are heartbroken by this tragedy. Austin is a tremendous football player and an even better human being. He is loved so much by his teammates. It has been a very somber last few days. We hold out hope for a full and speedy recovery.”

Lehi’s Kory Boyd, one of McWilliams’ little league football coaches, said, “Austin McWilliams is ‘that kid.’ Austin is that kid that every coach wants on his team. He is the one that will be early to practice and stay late to help clean up. He is the one that works hard in drills, that goes 100% in practice, that is always working to improve himself in the weight room. He is that kid that a coach can call out to the team as an example of what a championship effort is supposed to be like. He is that kid when accolades are given to him; he redirects it to his teammates.”

An account has been established at Zions Bank to help the family defray medical costs. As of Friday afternoon, over $6,000 had already been donated. Those who wish to help support the family may donate at any Zions Bank branch by mentioning the name, “All out for Austin, #56.” A GoFundMe account has also been organized under the title, “All Out for Austin.”

Those interested in receiving updates on Austin’s situation may refer to a Facebook page where updates will be provided as they become available. The Lehi area football community has organized a group fasting and prayer day on Sunday, January 17, to support Austin’s healing and recovery.