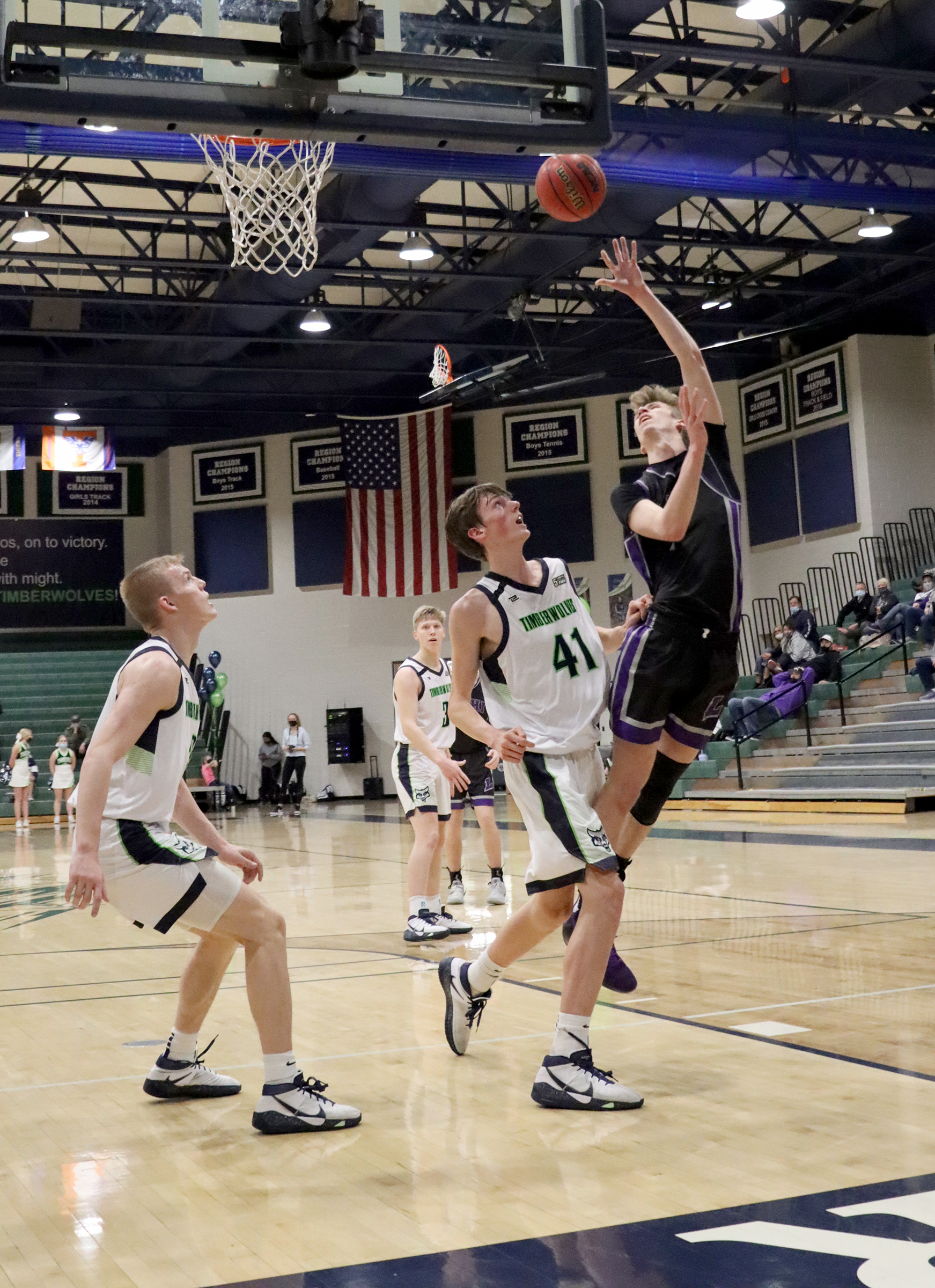 Lehi senior wing Blake Hill looks for a route to the basket around Alta defenders on Feb. 15. (Photos: Beky Beaton)

The Lehi boys basketball team avenged an overtime loss earlier in the season at Alta as they topped the Hawks in a make-up game Feb. 15, which had been postponed by COVID protocols at the other school.

The Pioneers finished the regular season on Feb. 19 at Timpanogos, where it was Senior Night. It was a fantastic game from start to finish but the ball bounced to the Timberwolves at the end as they were able to pull out a one-basket win in double overtime.

A solid team effort on both ends of the court helped the Pioneers to comfortably beat the Hawks. A pass from senior guard Noa Gonsalves to senior forward Peter Amakasu for a triple gave the home squad a 14-10 lead at the end of the first quarter.

Tough defense and opportunistic offense stretched the lead in the second period, helped by a layup and 3-pointer from freshman center Grayson Brousseau. Lehi was up 28-16 at the break.

The teams dueled essentially even in the third quarter. The visitors mounted a rally in the fourth and got as close as five points with 1:49 to play, but the Pioneers defended well and made their free throws down the stretch to preserve the victory.

Gonsalves shot very well and finished with 19 points to top off a solid floor game of three rebounds, five assists, three steals and a block. He thrilled the small but vocal crowd with a steal leading to a fast-break dunk in the third period.

“Overall, it was a good team defensive effort,” said Lehi Coach Quincy Lewis. “Noa had a very efficient game. I thought we held our ground against a fierce run by Alta and finished them off.”

If you’re a true basketball fan, the tight contest with the Timberwolves was your kind of game. Each team answered the challenge of the other time after time in a playoff-like atmosphere and the result could have gone either way right up to the final whistle.

Timpanogos had a slim 9-8 advantage at the end of the first quarter. The Pioneers outscored them by four in the second, and the Timberwolves returned the favor in the third and held a similarly narrow 42-41 advantage entering the final period. Multiple ties ensued and regulation time ended at 57-all.

The Timberwolves scored first in the overtime but Lehi was ahead by four with 22.8 seconds left. The home team was able to close the gap in time to force the second extra stanza.

Timpanogos had a one-bucket advantage most of that period, but a huge 3-pointer from way beyond the arc by Hill with 17 seconds remaining gave the Pioneers hope by reducing the margin to just one. However, the hosts converted a pair of free throws at the end to close it out.

Lehi posted some out-of-this-world numbers in this nail-biter, particularly in the second quarter when they completed 73.3 percent from the floor and 90.9 percent from the line. The Pioneers were 8-of-15 (53.3%) from 3-point range for the game and had 26 assists on 28 field goals.

Hawkins had a fantastic night, posting a double-double of 25 points and 10 assists with four rebounds and two steals. Amakasu netted 16 points with three boards, five assists and four steals.

Gonsalves had 15 points and three assists before fouling out in the first overtime and Hill scored 12 with four assists and two steals. Trane again provided some key minutes with six points and five rebounds off the bench.

“Our guys played their hearts out,” Lewis said. “We had our chances, but it just didn’t work out in the end. Sometimes it just goes that way. Tyson was outstanding and Tyler had a very good game as well.”

The victory gave Timpanogos second place in Region 7 behind Timpview. Lehi finished in a tie for third with Mountain View and Alta at 6-6 with an overall record of 13-8.

However, because they played a tough schedule and six of their losses were by five points or less, the Pioneers ended up third in the final state 5A RPI rankings. Only the top three seeds get a bye in the first round and Lehi earned that, along with home court through the quarterfinals.

“I’m pleased we were able to get the 3-seed and a bye in the first round,” Lewis said. “Now it’s a matter of us taking one more step and preparing for these next couple of home games. It will be fun to play in front of some of our students again.”

“We’re excited to get started with state,” the coach added. “I feel like we’re playing good basketball right now, which is always the top goal heading into the playoffs.”