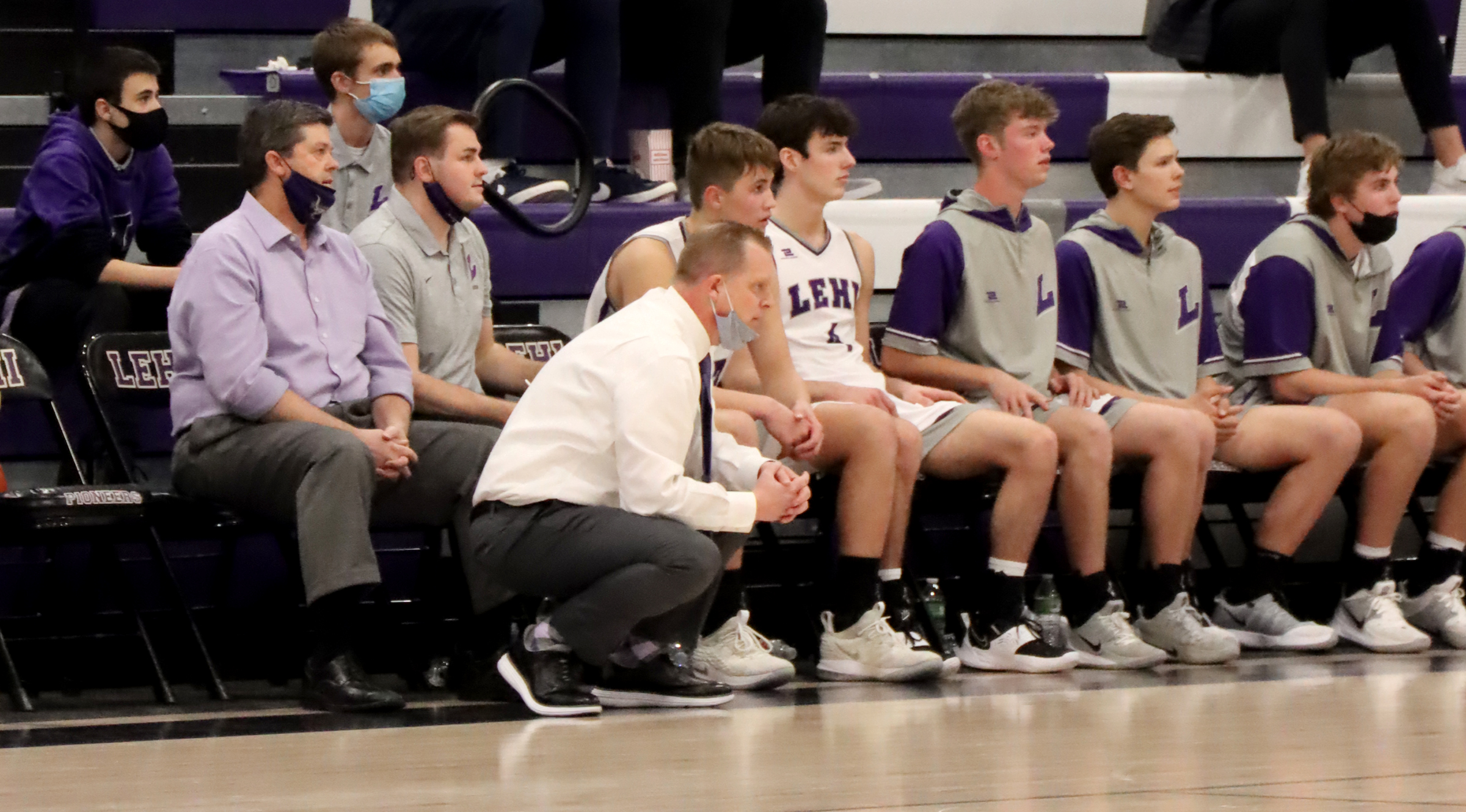 Lehi Coach Quincy Lewis keeps a watchful eye on the court during the Bonneville quarterfinal on March 3. (Photo: Beky Beaton)

The No. 3 Lehi boys basketball squad shot the lights out against No. 11 Bonneville on March 3, leaving nothing to chance as they posted a 56-35 victory to punch their ticket to the 5A state tournament semifinals.

The team converted 53.7 percent of their field-goal attempts, including 7-of-16 (43.8%) from long distance, and were perfect at the free-throw line on the way to the win, but it wasn’t as easy as the final score makes it look.

The Pioneers had a slim 11-8 advantage going into the second quarter. The teams dueled even through the period until senior guard Noa Gonsalves sank his second triple of the quarter at the buzzer to stretch the margin to 27-21.

The Lakers didn’t go away, however. They continued to battle through the third period and the lead was still in single digits at 39-30 as the final quarter started.

Gonsalves apparently had seen enough. In the first two minutes of the period, he made a basket, a steal, two free throws, a block and a rebound. The block stopped a sure fast-break bucket and brought a loud, appreciative reaction from the home-town crowd.

After senior forward Tyler Trane scored and senior guard Tyson Hawkins converted an and-one, the score had ballooned to 48-30 with 4:40 left on the clock.

The Pioneers allowed Bonneville just five points down the stretch and wrapped up the contest with confidence.
Gonsalves finished with 26 points on 9-of-13 (69%) shooting from the field, including 4-of-7 (57%) from beyond the arc. He also had five rebounds, four assists and two steals. Hawkins had a perfect shooting night while netting 12 points to go with eight assists.

“I thought Noa really took the game over when we needed it,” said Lehi Coach Quincy Lewis. “He can raise his level of play basically at will.

“Bonneville was a good tough defensive team and well coached. We just wore them down,” he continued. “We struggled boxing out in the first half, but we fixed that in the second half. It’s a funny thing, when you play defense, you get in transition a little bit.”

The Pioneers were matched against No. 2 Olympus for the semifinal game. “Anytime you get this far, that’s an accomplishment,” he said. “There’s a lot of good teams out there. At this point you fall back on the fundamentals.”

Gonsalves was pleased with the result. “It was fun, and we came out with a win,” he said. “Our No. 1 goal was to outhustle them, and we did that. I just kept shooting because my shots were falling.

“That block on the fast break kind of woke everybody up,” Gonsalves said. “We started to work together and make plays and laid it all out there.”

He was looking forward to Friday’s challenge. “We’ve worked hard for this,” the player said. “We’re not done yet. There’s a lot of work still to do.”