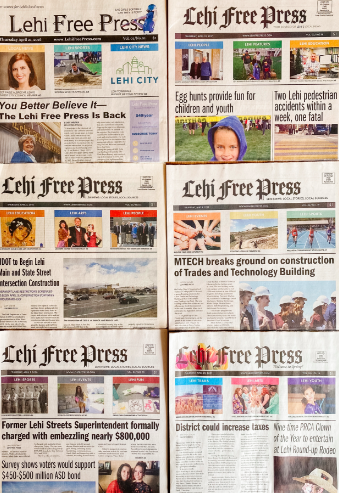 In many endeavors, five years is not a significant achievement, but it is notable in today’s world of newspaper publishing. In 2016, Sally Fowler Francom moved backed to Lehi after a 30 -year hiatus and asked about the Lehi Free Press. “We haven’t had a paper for about 8-9 years,” Her sister, Donna Barnes, replied. “That’s sad, communities need local news,” Francom responded. The sisters decided to collaborate and restart the shuttered Lehi Free Press.

The first issue was published on April 21, 2016, and in 2021, the paper is still publishing weekly. The companion website, lehifreepress.com, has been operational since 2016 and is being rebranded as Lehi Pointe.

The Lehi Free Press began in 1932, when George P. Price severed his relationship with Earl Gaisford, the Lehi Sun’s editor, and formed his own paper. The two newspapers continued their semi-cordial relationship until A.F. Gaisford, founder and publisher of The Sun, passed away. Frank Gaisford, Jr. became the new publisher. The Sun office was established on Main Street in Lehi, right next to the Lehi Free Press office. The two rival newspapers continued to serve the citizens of Lehi until 1949 when the two newspapers combined into a single paper, The Lehi Free Press with E. Russell Innes as co-partner with J.P. Heal, who had purchased the paper from George Price.

According to Richard Van Wagoner in Lehi, Portraits of Utah Town, “Betty Fowler, a long-time institution, wrote herself into our hearts with twenty-two years of cozy, intimate newspaper tales of family, friends, and Lehi life.”

Fowler retired in 1993, and Russ Daly took over editor duties. In 1996, the Lehi Free Press, American Fork Citizen, and Pleasant Grove Review became part of Newtah News Group. Several years later the organization was sold to Pulitzer. The Pulitzer organization also took over the publication of the Daily Herald.

In 2003, Pulitzer discontinued the publication of the local newspapers. Loss of the weekly was a devastating blow to Lehi, Pleasant Grove, and American Fork residents.

“Having been a professor for many years and not living in Lehi, I have not been as close to my Lehi roots as I would like to be. Having worked at the Lehi Free Press as a student way back in the late 50s, I decided to subscribe to the current Lehi Free Press. I delight in reading articles that deal with the old Lehi, the Second Ward, Wines Park, bazaars, Halloween, and many other items that relate to my youth and neighborhood.”

“We started publishing the Lehi Free Press because we felt the community needed a local news voice. I think our readers enjoy our content and rely on us for local news, especially Lehi City news. It’s also been great to honor the legacy of our mother, Betty. We will keep printing the Lehi Free Press and posting stories on our website as long as the community supports us,” said Francom.

The Lehi Free Press will be conducting a five-year anniversary subscription drive and “Gift-o-Rama” style prize giveaway in the next few weeks. Locals are encouraged to support the effort.

When asked about the endeavor, Barnes said, “When I told my husband about our venture, he just rolled his eyes and said, ‘My (expletive deleted) you’ve bought a dairy.”