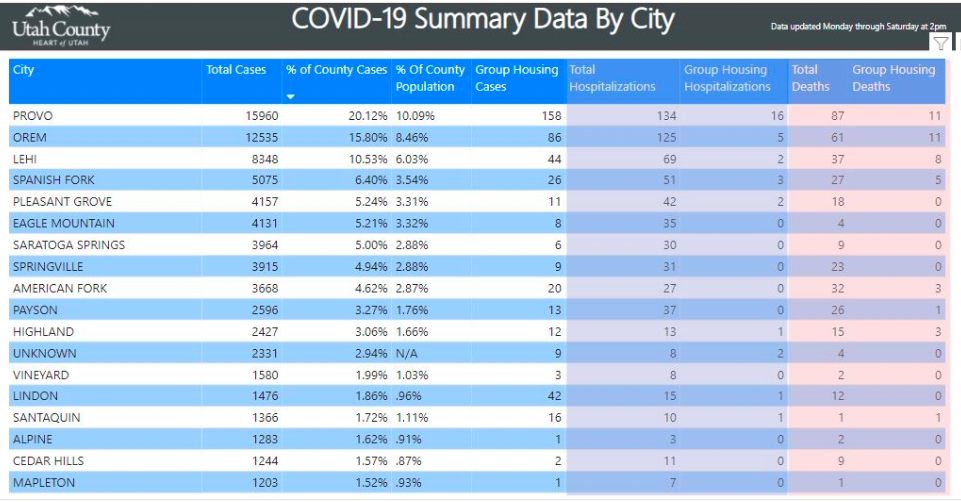 With the worst of COVID-19 hopefully behind us, how has Lehi fared in terms of cases, deaths, and other public health measures? The Utah County Department of Health has an interactive dashboard available to the public that provides daily updated data on COVID-19 cases, deaths and other information.

As of April 26, nearly half a million Utah County people have been tested (499,542). According to the Utah County Department of Health (UCDH), Utah County has 633,582 people. Nearly 79% of the County tested for the virus at some point between March 2020 and today.

There have been 94,950 cases of COVID-19 recorded in Utah County as of April 26, 2021. That number does not include cases from individuals who didn’t confirm their positive diagnoses with doctors, clinics, or other medical professionals. Nearly half of all the recorded cases in the County occurred in Provo (15,960), Orem (12,534), or Lehi (8,344), Utah County’s three most populous cities.

The three cities with the highest case rates per capita in order were: 1. Provo 2. Orem, and 3. Spanish Fork.

One would expect that a city with 5% of the county population would hypothetically have 5% of COVID-19 deaths. Several Utah County cities had higher death rates than their population would suggest.