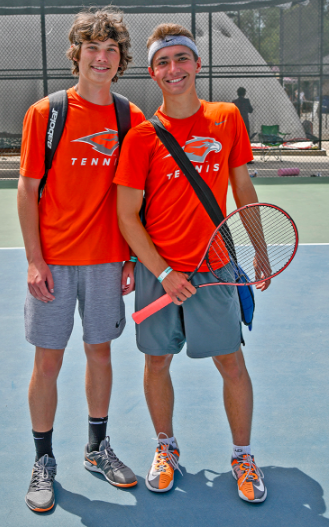 With qualifiers in three of the five brackets at the 6A state tennis championships, the Skyridge boys team earned a respectable sixth place with a solid showing at Liberty Park in Salt Lake City on May 13 and 15.

Both Falcon singles entrants earned impressive upsets in the first round, a testament to the high level of the competition in Region 4. League champion Lone Peak earned the state title as well, and American Fork finished a strong third.

In the No. 1 singles bracket, Skyridge junior Brock Golding (5-5) came in as the fourth seed from Region 4 and faced senior undefeated Region 2 champion Brandon Khoune of Taylorsville. Golding retired the Warrior entrant 6-4, 6-2.

His next opponent was sophomore Region 3 second seed Cody Burke (8-4) of Riverton. Golding put up a good fight but bowed to Burke 6-1, 7-5.

Junior Mcgwire Rowland (4-6) represented the Falcons in the No. 2 singles bracket. He was the fourth seed from Region 4 and took on the undefeated Region 1 champion, junior Ryan Hicks of Layton. Rowland won handily 6-3, 6-3.

In the second round, Rowland was paired with Region 4 third seed Carson McBeth (5-5), a junior from American Fork. McBeth took the match 6-3, 6-1.

Skyridge’s highest-seeded entrants were able to advance the farthest in the tournament. Earning the second spot from Region 4, senior Logan Pickle and sophomore Max Ericksen had a 6-4 record at No. 2 doubles during the regular season.

In the first round, they defeated senior Jackson Osborne and junior John Seo (8-6) of Jordan 6-0, 6-4. Next up were sophomores Ty Fergeson and Jeffrey Turner (5-5) of Fremont, who upset the Region 2 champs to advance. Pickle and Ericksen eliminated them 6-1, 6-2.

That win propelled the duo to the semifinals, where they were matched against the Region 4 third seed, sophomore Sam Jensen and senior Treson Hucks (6-4) of American Fork.

The Cavemen pair won the first set 6-4 but the Falcons rallied and swept the second set 6-0. They continued to compete well, but the American Fork team prevailed 6-3 in the final decisive set.

The Skyridge victories earned the team four points in a field of 17 programs who earned at least one point at the state meet.

Lehi and Skyridge athletes prepare to compete at state meet