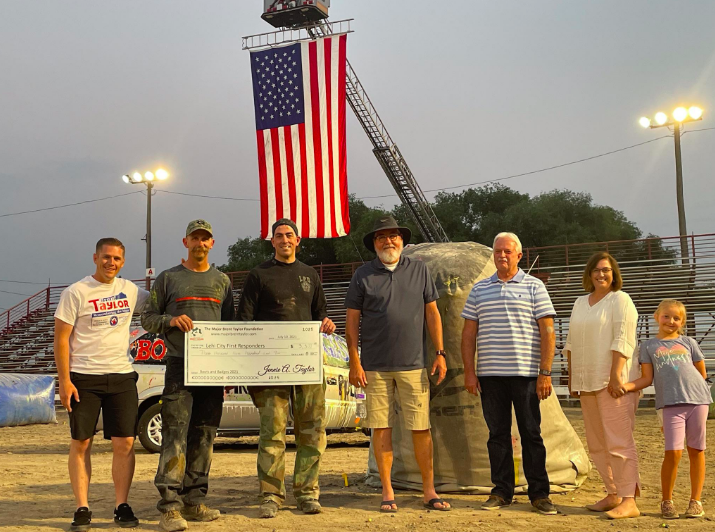 The fundraiser was the brainchild of Lehi resident Sterling Bronson, who presented his idea to the Lehi City Council on March 9 of this year and got the go-ahead to proceed.

Participating teams included Sector 9 out of Springville, Red Creek Rangers of Herriman, Trash Pandas from Ogden, and the Wannabes, a composite team of individual players from as far away as St. George. The event was a big hit with players. Jordan Hernandez, captain of the Red Creek Rangers and owner of Red Creek Paintball, commented, “It’s great to see paintball under the lights and in Lehi again. It’s even better to come together for a bigger cause. Can’t say enough good things about our first responders!”

Bronson served as emcee for the event. The action was fast and furious, with teams starting at opposite ends of the arena and battling to reach the center flag under heavy paintball fire. Dozens of giant inflatable bunkers and four salvaged vehicles served as cover on the field, and referees were on hand to call close matches. Lehi’s first responders started slowly against the more experienced teams, with just one victory on Friday night. By Saturday, though, they gained momentum and handed the undefeated Wannabes their first loss of the tournament. Ultimately, the Wannabes came out on top, winning bragging rights and the official Boot & Badge trophy.

The Lehi Civic Improvement Association and the Major Brent Taylor Foundation offered their support for the event. The Lehi Power Department helped hang 300 feet of netting to protect spectators from stray paintballs. Local paintball retailers stepped up to provide rental gear and supplies for participants.

Through generous corporate sponsors and local donors, Bronson surpassed his goal and raised more than $5,000 for Lehi’s first responders. The funds will be used to purchase two new portable defibrillators and ten bleed-stop kits. Lehi resident Tyson Hodges, who played for the Wannabes, said, “Playing in the Boots and Badges Tournament was a blast. There is nothing like supporting our first responders while competing against them in paintball.”

Mayor Mark Johnson and Councilmembers Paul Hancock, Mike Southwick, Chris Condie, and Paige Albrecht attended the event. The mayor was there both nights, enthusiastically supporting Lehi’s team. “The Boots and Badges event was both unique and fun. It raised important funding for projects that support both Fire and Police. I really hope we can bring it back as an annual event,” said Mayor Johnson.

Lehi Fire Chief Jeremy Craft agreed, “It was a great event that not only served to raise funds for the police and fire departments but helped bring the departments and community together. I look forward to seeing what next year will bring.”